Why you should love Paul McCartney 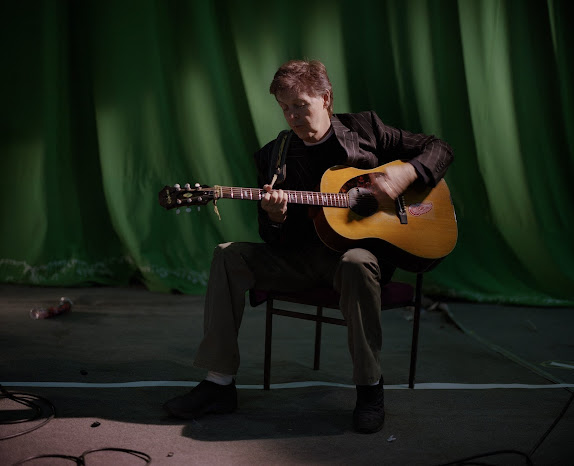 Paul McCartney in 2003, playing the same guitar he used for recording "Yesterday." Photo by Chris Floyd, used by permission.

Robert Anton Wilson was not much of a Beatles fan (or even a pop music fan), but Robert Shea certainly was.  And certainly there are RAW fans who are huge Beatles fans, such as John Higgs and myself. (Here is John's Paul McCartney playlist, and mine.)

While we wait for the new McCartney III album to come out in a few days, I thought I would direct your attention to Ian Leslie's piece, "64 Reasons To Celebrate Paul McCartney." I think it may be the best piece of music criticism I've ever read; I hope Ian Leslie, whom I never heard of until yesterday, turns it into a book. Even the links in the article are good, such as Leslie's "deep cuts" playlist on Spotify.

Here is my reaction to couple of Leslie's statements:

I’ve always wondered what I would say if I saw him in the street around there. [Leslie's a Brit, so he gets to walk by MPL Communications every so often, and brag about it a little -- Tom]. I think about which obscure song or album I would pick to tell him was my favourite, just so he knew I wasn’t some casual fan.

I have a recurring fantasy that I somehow find myself in an elevator with McCartney, and I start softly singing "Did We Meet Somewhere Before?," a McCartney tune that as I far as I know has still not officially released.

McCartney’s reputation has never fully recovered from the shredding it took when The Beatles broke up. He is still compared unfavourably to his most important creative partner. Lennon is soulful, deep, and radical; McCartney is shallow, trivial and bourgeois. That dualism, which took hold in 1970 and was reinforced by Lennon’s horribly premature death, still holds sway. Probably if you asked most people who know a little about The Beatles to say who they found most interesting, John would be the most common answer. If you surveyed Beatles nerds I suspect they would be more likely to say Paul, since the more you learn about the band you more stunned you are by what he brought to it.

[This is not a "reaction," as I wrote it in April as a letter of comment to William Breiding's fanzine, "Portable Storage,"  but notice that as a "Beatles nerd," I am thinking along the same lines, just as Leslie suggested. This is in response to a discussion in William's zine about favorite Beatles:]

But I wonder how many people are like me. I have not a fixed favorite Beatle all of my life; my choice has changed over the years. As a teen, my favorite was George. He seemed to be kind of an underdog, only allowed a couple of songs per album, and "All Things Must Pass" was the first really good solo album. Then, too, the organized the charity concert for Bangla Desh, which coaxed a great live performance out of Bob Dylan.

I still think that Lennon was the most interesting, or at least the one I could relate to the most, what with his absurd humour and witicisms. He also seemed to be musically more experiemental where Mc Cartney was more pop, even though it is often difficult to know who did what exactly.
The main problem with Lennon was that it took his entire (admittedly rather short) lifetime for him to sort out his problems. Besides, going around telling people to go about having No Possessions when you live in a luxury flat makes me grin in the same way than when Mick Jagger says that You Can't Always Get What You Want when the man is on top of the world...

Even though I couldnt care less about the person, I somehow always like Ringo's voice and Don't Pass Me By used to be at least in my top 3 favorites Beatles songs.
But I guess if you really want to look cool, you should say that your favorite Beatles is Stu Suttcliff, kind of the Beatles' own Syd Barrett or something.

I am reading the Illuminatus trilogy for the first time. I was struck by one of the narrators incorrectly noting "Why Don't We Do It in the Road" was a John Lennon song. Of course it was a Paul song. I suppose this mistake could have been intentional.