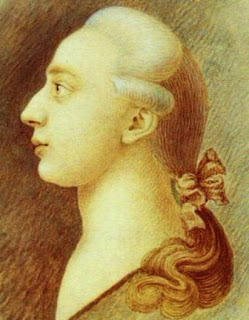 This week, please read from page 146 ("The crisp but sun-bright season of winter in Napoli was now upon them") to page 168 ("I will always hear that voice, my true father's voice, telling me to kill every aristocrat in Europe.") This for me is the most shocking passage in the book, and I did not look forward to returning to it.

Robert Anton Wilson shows off his knowledge of history, and not just in the passages about Casanova. (Beyond Chaos and Beyond has these sentences: "In later years what drove RAW to distraction was young editors who had no clue about the numerous historical references peppered throughout his books, particularly the Historical Illuminatus Chronicles. 'I don't have time to be their history tutor,' he growled in exasperation on more than one occasion.")

"blue-eyed Normans," page 152. The Normans are famous for conquering England in 1066, but they also conquered southern Italy and Sicily, ending the Muslim Arab conquest of Sicily.

The Chapel Perilous of Cosmic Trigger returns (page 167-168). "It is very lonely, and very frightening."

I find it interesting how often Bob refers to Vico in this novel.

Pg. 150 - Robert Shea's Shike novels point to a time of unity among the various "clubs".

Pg. 154 - the discussion of Nature in spring makes me think of "The Rite of Spring".

The scene with Peppino definitely appears the most violent and difficult writing in all of RAW's prose. About an hour after reading it this morning there were images of Notre Dame Cathedral on fire and burning filling the large screens at the gym. It's being described as a violent fire.
p. 162: "'I shit on your God,' Peppino repeated beginning at last to look a bit dazed. "I shit on the Virgin Mary," he added, blood splattering all over him."
p. 163: "... I fuck the Virgin Mary!
p. 164: "The fireworks started again, and Sigismundo went into the crazy space.."

I view the Paris fire associated - connected in imagery - with the photo recently on the front page of the N.Y. Post of the Twin Towers burning with a quote attacking Rep. Ilhan Omar The traitor Trump tweeted a similar image with video footage also attacking Omar. Not condoning or endorsing anything she said, but the critical reaction seemed over the top from the far right.
To see an account of the magical (quantum) influence recorded media can have, for better or worse, see William Burroughs tape recorder experiments in "The Ticket That Exploded."

This week's portion begins with an interesting passage on page 146:

"The crisp but sun-bright season of winter in Napoli was now upon them. Life goes on, Sigismundo thought, even for us Damned Ones. It is as I felt it that day in Arrezo; millions come, millions pass, millions die. The fabric is always changing but always the same. Life goes on.

"crisp but sun-bright" seems similar on a linguistic level to Sigismundo's initials changing from S.C to S.B. "Life goes on" mentioned twice repeats the ON formula. "Sigismundo thought" S + t = 69 = reverse meaning. "Damned Ones" = DO. How to DO ON? Millions = 6 zeroes = Tiphareth.

ON = 120 = the mystical number of He(path 15). 777, numerically mentioned in the next paragraph on p. 146, lists the tarot Atu of he as The Emperor. However, "The Book of the Law" dictated to Crowley that "tzadic is not the Star" so Crowley changed the correspondence of The Star tarot card to He (path 15) making ON = The Star. Knowing how the Star works or reading Crowley's commentary of this card in "The Book of Thoth" may suggest how to do ON.

The Star card seems unique in Crowley's Qabalah because he continued to use both the old and the new attribution for it even after receiving the instruction from "The Book of the Law." This make sense to me because the Star relates to two of Thelema's most iconic phrases: "Love is the law, love under will" - which appears in the same verse where Crowley was told to change the Star attribution - and "Every man and every woman is a star." ON uses the new attribution of the Star maybe because it takes a man AND a woman, or at least male and female energies if not gender, to have the ON formula function like a Star.

The execution of Peppino is pretty traumatic but I felt that it was very similar to the martyrdom of Valentine Michael Smith at the end of Stranger in a Strange Land. Appropriately a bit more violent, a bit more ambiguous but similar in style and content.

I always have loved Casanova- "I love the truth so much I am willing to lie to bring it about" was a phrase I lived much of my adolescence by...not sure if that was a good idea though. His autobiography was readable even for a sixteen year old dumbass if anyone is ever curious about it.

Oz- I always enjoy your commentary even if I don't say anything. You often seem to have squared everything away. I appreciate your observations about The Star, one of the more dreaded Trumps (not a dreadful as the orange one) when I throw the cards because I never seem to apprehend its portents correctly. Your ruminations on the ON formula are fascinating.

Eric- I guess I kinda associate Vico and Wilson the same way I associate him with Joyce and Crowley, perhaps to a lesser extent. Perhaps he's referencing him more because of the space time of the novel at hand. I also need to talk to you about how you ran a Finnegans Wake reading group for your students!

A typo shows up at the end of the section on p. 153: "Uncle Ptetro." I have the newest edition of the book.