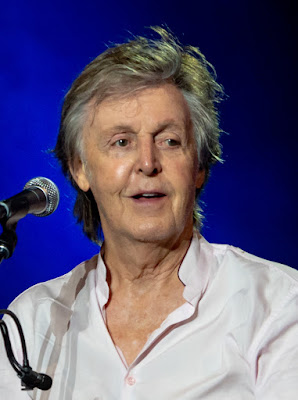 You probably know who this guy is. (Creative Commons photo)

John Higgs recently put together a "confused and obscure" Paul McCartney playlist, so I thought I would post it and post my own playlist of favorite Paul songs.

But first, a little bit on the individual Beatles. Was it Tom Robbins who said you could tell a lot about a person by asking the person to name his/her/their favorite Beatle? William Breiding recently mentioned (in his fanzine, Portable Storage) that his favorite Beatle was Ringo, which struck me as unusual, and it prompted this exchange between us in the lettercolumn of PS No. 4.

Here is our exchange:

ME: But I wonder how many people are like me. I have not a fixed favorite Beatle all of my life; my choice has changed over the years. As a teen, my favorite was George. He seemed to be kind of an underdog, only allowed a couple of songs per album, and "All Things Must Pass" was the first really good solo album. Then, too, the organized the charity concert for Bangla Desh, which coaxed a great live performance out of Bob Dylan.

WILLIAM: Ever since "A Hard Day's Night" I have identified with Ringo. As I became an adult, Ringo seemed to be the only Beatle that had a sense of humorous perspective. Upon rediscovering the Beatles in my 60s I came to realize that Ringo's drumming completely dominates the sound of the Beatles. Without him they would have been a different band. Your argument for Paul is not without merit. He is probably the nicest of the Beatles. I never liked John. He always seemed like a mean little man to me. George? A lost spiritualist.

OK, here is John Higgs' Paul McCartney playlist, John explains, "I’ve done this playlist because I know I haven’t quite got my head around McCartney, in the same way that I ‘get’ John, George and Ringo. So this is a personal and idiosyncratic playlist of songs in which I find clues that help understand him."

12. This Never Happened Before.

I was interested in this as a I have a personal playlist on YouTube Music of my favorite Paul songs, here is my list. Unlike John, I have no justifications, I just like the songs:

3. Heaven on a Sunday

4. Did We Meet Somewhere Before?

9. Get On the Right Thing

Footnote: Portable Storage, referenced above, is a fine genzine. Follow my link above to get PDFs!

Terrific piece. Back in the eighties I wrote a Marxist-McCartneyist manifesto for a world with everone as rich as Paul McCartney. I have had two Beatles dreams in the past week, so I have had them on my mind a lot.
My solo Paul playlist:
1. Twenty Flight Rock from "Tripping the Live Fantastic"
2. Mamunia
3. Hi Hi Hi
4. Silly Love Songs (I love that bass line. I first fell in love with Paul and the Beatles in 1976. And I love that a song with three simultaneous melodies has the title "Silly Love Songs".)
5. With a Little Luck
6. Coming Up
7. Helen Wheels
8. You Gave Me the Answer
9. Magneto and Titanium Man
10. Rock Show
11. I've Just Seen a Face ( on "Wings Over America")
12. That Would Be Something
13. Teddy Boy
14. Maybe I'm Amazed
15. Monkberry Moon Delight
16. Bip Bop
17. Mary Had a Little Lamb
18. Good Rockin' Tonight (on "Unplugged")
19. I Wanna Be Your Man (on "Paul Is Live")
20. The whole fucking album "Run Devil Run" with David Gilmour on guitar

Thank you for your list! This seems to be turning into a Beatles weekend, I'll have another Beatles related post Sunday.

I'm surprised Too Many People isn't on anyone's list. I'm not that familiar with McCartney's solo work after Band On The Run, Really enjoy that album and Ram, also love the song Maybe I'm Amazed. Another one I really like, Paul's cover of Buddy Holly's It's So Easy to Fall in Love for the Holly tribute album maybe ten years ago or so.

Saw an article today about a new documentary coming out concerning someone who happened to run into the Beatles in India and hung out with them for 8 days. His impressions of the four:

"Lennon was the funniest, with a wry, teasing wit. Starr appeared very calm and grounded. George was the quietest and most available for intimate conservations. And Paul was the most friendly and playful member of the band."