Review: Kingdom of the Wicked by Helen Dale 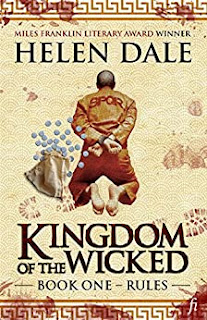 Continuing my valuable work of reviewing books that came out years ago, I’d like to touch on Helen Dale’s Kingdom of the Wicked duology. Dale is best known for controversy caused by her publishing the novel The Hand that Signed the Paper under an assumed identity in 1994 that ties into the current, exhausting conversation surrounding cultural appropriation. Dale continues to flirt with “controversy” and contributes to The Quillette, a self-proclaimed bastion for unpopular intellectualism. Yet, for all the firestarting that Dale has been accused of, I found The Kingdom of the Wicked to be a painfully, and beautifully, human look at a topic that could easily be mishandled.

That’s not to say that Helen Dale isn’t being subversive  throughout the two novels. The Kingdom of the Wicked is an alternative history of the trial of Christ, herein referred to exclusively by the proper Hebrew name of Yeshua ben Yosef, something I think RAW would have appreciated. Indeed, all of the otherwise-familiar characters are separated from their previous characterization(s) by being identified by their historically/culturally correct names and being placed firmly in Dale’s reconstructed first century setting. The historical accuracy is contrasted with the fantastic elements of the setting; namely that Archimedes was rescued from the Siege of Syracuse, began to work for the Romans and jump-started the Industrial Revolution by 1700 years. The novel’s world is introduced by the members of the Pilate household ordering pizza and the differences between authentic pizza and the Judaen imitations. (A discussion of pizza seems to be a good introduction to a constructed world as Neal Stephenson also does it in Snow Crash.) Another highlight from the first novel is Caiphas, instead known by the Hebrew Kayafa, coming back from a Roman symposium with a head-splitting hangover stopping at a gas station to buy cannabis to help and meeting with the Judean revolutionary Yehuda Iscariot. (It is interesting that Judas is given his Hebrew name but retains his bastardized-Greek epithet.)

Another side note: I asked my wife, who knows more about ancient Judaism than I do, where the characterization of Judas as a revolutionary comes from; she said there is no historical or Biblical evidence for this theory, but that folk etymologies have connected the name Iscariot with the Sicarii, a group of radical anti-Roman zealots. Most likely, Iscariot is a Hellenization of a Hebrew epithet meaning “from Kerioth”, a town in Judaea. Curiously, this is one of the apocryphal stories built around her cast that Dale takes and runs with. My own research brought up that some theologians have tried to explain, if not justify, Iscariot’s betrayal of Christ in terms of a political disagreement. Of course, I am familiar with Judas as Revolutionary from my favorite retelling of the Gospel, Jesus Christ Superstar. The second book opens with a bit of Biblical errata brought to life in the form of Christ’s purported, non-divine, father- a Roman legionnaire with the regrettable, only because of modern context, name Pantera. Because I love Celsus and Origen I really appreciated this storyline.

Aside from consumable vice, and there’s plenty of it, sex is everywhere in the novel. This is the main point of contention between Imperial Rome and occupied Judaea -- but there are plenty of other issues which are explored over the course of both novels. In many ways the Romans are going to be more sympathetic to a modern reader, at least of my persuasion, but the Jewish people are given plenty of time to lodge their complaints against the Roman lifestyle. The Romans have brought industry and its benefits, namely electricity, travel, communication, and medicine, to Judaea; but their laws and social mores horrify the local populace, who are willing to live in relative squalor rather than bow to Romanization.

And with the discussion of sex comes the discussion of women’s issues. Much of the defense of Yeshua ben Yosef comes from the fact that while he sympathizes with the Jewish separatists, the Zealots, to an extent, he also opposes their violence and commitment to honor killings. The honor killings are conducted against Jewish women who marry Romans -- this tradition of concubinage is horrifying to the locals but it also allows the women to live much better lives than they do under Jewish law. Cynara, the daughter of Joseph of Arimathea, is an example of a Jewish woman who has for the most part abandoned her people’s lifestyle and become almost fully Romanized. Mary Magdalene, instead of being cast as the traditional prostitute, is instead a Romanized, but still spiritually Jewish, newscaster whose stunning beauty and willingness to live with a Roman causes other characters to call her a whore out of jealousy. Much of the debate between the Roman and Jewish people centers on easy access to abortion under Roman law. One of my favorite parts of the book comes from Pontius Pilate, who, while being forced to argue abortion because of the Zealots, says with marked irritation that this is all “woman’s work.” That is not to say that it is lesser than a man’s work, but the modern sensibility is that abortion is almost exclusively a woman’s issue.

The novels follow the Trial of Christ for the disruption in the Jewish Temple. His prosecutor and defender are fictional characters whose own stories form a large part of the narrative. There were many elements of the novels I can’t cover here but do their part to flesh out Dale’s world. The novel creates an intellectually stimulating dialectic between the Roman and Judaean ways of life, where the excesses and virtues of each are brought into view by the conflict between them, and we are also given glimpses of the possibilities that emerge from a fusion -- or a refusa l-- of both. The parallels to our own times and the endless liberal versus conservative debates are difficult to ignore. In these works at least, Dale comes across as the true classical liberal that she aspires to be, eschewing ideology for a clear-eyed and agnostic wrestling with the truth. Oh and there’s cyborg women who fly giant hawk ships with living snakelike hair- one of them is Jesus’ half sister. Pretty good.