Jesse Walker on his new book

Tomorrow marks the publication of Jesse Walker's new book, The United States of Paranoia, which traces the history of conspiracy theories in the U.S. I was allowed to read an advance copy of the book and it's very good. It will interest (1) Folks who want to think about conspiracy theories and what they sometimes say about us; (2) Anyone interested in U.S. history who wants to read a book that isn't about the same old stuff (3) People who like  interesting nonfiction in general. Far from being a hobby of people on the fringe, conspiracy theories are at the core of the country's history and always have been, Jesse argues.

Oh, yeah, it also will interest (4) Robert Anton Wilson fans, and not just because the entire book is about conspiracy theories. As this blog concerns Robert Anton Wilson and Wilson's interests, I should point out that Jesse's book contains a chapter, "Operation Mindfuck," that will tell you much that you didn't know before about Discordianism, Kerry Thornley, RAW etc.

The Los Angeles Times reviewed Walker's book on Thursday and called it "an oddly entertaining exploration of the roots of 'paranoid' thinking across several centuries of American history.

"It's all too rare to come upon a writer willing to attack the sacred cows of the right and left with equal amounts of intelligence and flair. Walker is, thankfully, that kind of writer and a tireless and thorough researcher to boot," LA Times reviewer Hector Tobar wrote. "He also states an obvious fact many skeptics are unwilling to accept: Behind just about every conspiracy theory there is also, more often than not, a grain of truth."


I  asked Jesse for a new interview (I first spoke to him here) and asked him about his book, including what he hopes people will learn from  it and what really happened to JFK in Dallas. I'm going to cross post this to my blog at work, but the complete interview, featuring "RAW material," is what you are about to read.

Jesse has several speaking appearances set up to promote the book; you can read about them here.  In addition, Jesse will be at the Cato Institute on Sept. 11. The C-SPAN interview is here. For more events, follow Jesse's Twitter feed.

What do you hope people will learn after reading The United States of Paranoia?

It seems to me we are living in very paranoid times, akin to what the country went through in the 1970s. Do you think the timing of your book turned out to be good, perhaps by accident?

WALKER: Many people have said this to me. But as I say in the book, "it is always a paranoid time." If this had come out last year, people would have looked around at all the election-year conspiracy chatter and told me how well-timed the book was. If it had come out the year before that, people would have pointed to the birthers or to the conspiracy theories about the death of bin Laden. 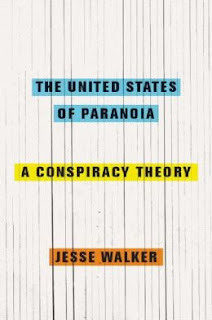 Do you hope some of your readers will become more tolerant? Much of the book seems to argue for tolerance of other peoples' conspiracy theories, or at least an effort to understand where they are coming from.

WALKER:Well, I'm all for debunking claims that aren't true, and that includes untrue claims about conspiracies. But I do hope the debunkers will approach their task with a little humility, an awareness that they're capable of believing dubious tales too.

One chapter of your book traces the effects of 1970s paranoia on popular culture, including conspiracy movies. Do you expect a new wave of paranoid surveillance movies in reaction to the NSA scandal?

WALKER:If we do get them, I hope they're as good as the '70s movies were.

Is there anything interesting you learned about Robert Anton Wilson by speaking to his daughter, Christina Pearson, that didn't make it into the book?

WALKER:There's a lot. Actually, one of my regrets about the book is that I have so much material about Wilson -- from that interview and from other sources -- that I didn't use. I could have made that chapter three times as long, and it would have been interesting, but it would have stopped being a segment in a book about American paranoia and started being a biography of Robert Anton Wilson. And while that's a book that absolutely needs to be written someday, it isn't the book I wrote this time.

When I talked with Christina, the portrait of her dad that emerged was one of a devoted husband who was a loving but neglectful parent. Someone who in some ways was a classic absent-minded professor: capable of sharp intellectual insights but unsure what to do when a light bulb broke. Someone who spent half his life striving to establish himself as a writer, who finally had a breakthrough with Illuminatus!, and who promptly had his world fall apart again when one of his daughters was murdered and his son went mad. And someone who was, despite everything that went badly in his life, fundamentally an optimist. "He thought he was going to live forever," Christina told me. "When did he stop thinking that?" I asked. "About 48 hours before he died."

Terrific piece. I particularly enjoyed the discussion of his interview with Christina.

Hurry up and write the RAW biography, Jesse!