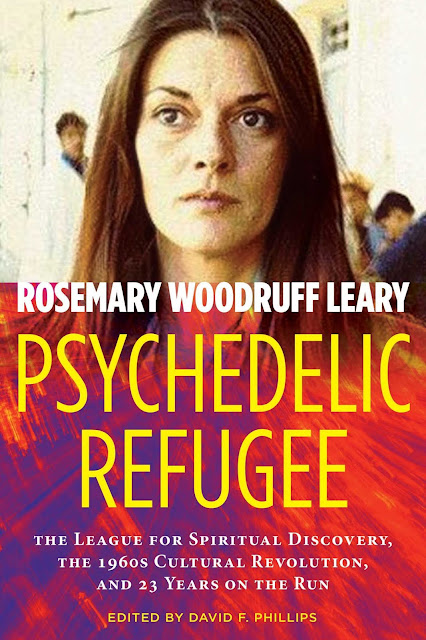 Ready for another book about Timothy Leary and his milieu? Psychedelic Refugee, by Rosemary Woodruff Leary and edited by David F. Phillips, will be released on Feb. 9, 2021.
Rosemary Woodruff Leary, Leary's ex-wife, died in 2002, age 66.  So the book actually was assembled by David F. Phillips, who died on March 26, 2020. So this is doubly a posthumous book.
The "About the Book" blurb at the publisher's website explains:
In this intimate memoir, Rosemary describes her LSD experiences and insights, her decades as a fugitive hiding both abroad and underground in America, and her encounters with many leaders of the cultural and psychedelic milieu of the 1960s. Compiled from Rosemary’s own letters and autobiographical writings archived among her papers at the New York Public Library, the memoir details Rosemary’s imprisonment for contempt of court, the Millbrook raid by G. Gordon Liddy, the tours with Timothy before his own arrest and imprisonment, and their time in exile following his sensational escape from a California prison. She describes their surreal and frightening captivity by the Black Panther Party in Algeria and their experiences as fugitives in Switzerland. She recounts her adventures and fears as a fugitive on five continents after her separation from Timothy in 1971.
Would "her papers" in fact be part of the Timothy Leary archive at the New York Public Library? I guess we'll find out soon. The New York Times obituary referenced above says she "lived in hiding for 23 years" after separating from Leary, so the post-Leary chronicle should be interesting, too. She later became friends with Leary again; see the obit for details.
Hat tip: Michael Johnson.
on December 24, 2020