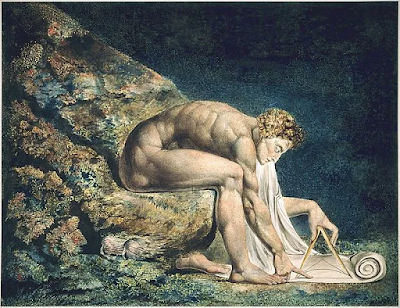 Once learned men knew that things fell because it was in their nature to fall, according to the Peripatetic. Once a man was burned at the stake for saying that there might be other Earths that were perhaps themselves inhabited. Once a man knew that the world had begun precisely on an October day in 4004 BCE based on his study of a bastardized translation of a bastardized translation of a bastardized translation. Once a poor engraver’s poetry was said, in the only review of his lifetime, to be “the ravings of an unfortunate lunatic.” Once man said he could split the atom, knowing full well that this was a lie because the idea of an atom was smaller, much smaller, than our primitive tools could ever discern. Once a man thought that he’d explained away consciousness as the meat sweats of glands and pulse. (I do not mention Woman because She was never given enough of a platform to be as Wrong as He.)

Mankind’s wrongness is a blessing in disguise. Because the world that mankind builds always seeks to be correct and being such a flawed Being mankind’s idea of what “correct” might be is almost always so heinously incorrect. Humanity never really shook the stupid so its a good thing our “best and brightest” are usually proven to have a bit of egg on their face. It makes way for the Future, which is where our hopes lie. And someday, perhaps, the last shall be first and this whole barrel of babbling apes will burst into something better.

A smart guy, by my estimation, wrote a few years ago that everyone else was writing history so he better get in on the game. He titled his work True History and it was entirely composed of lies. Partially because of a trip to the moon atop a waterspout, it makes a better case for one of the first works of science fiction than anything by Margaret Cavendish or Voltaire. Our lies often turn out to be better than our truths. We did go to the Moon- we did that against all odds. Once another dude, who I think was pretty smart, wrote that “all art is quite useless,” but another guy, considerably weirder but perhaps as smart, crossed that out and pointed out that “nothing that is useless can continue to grow and thrive.”

Both of our protagonists are at a loss. Sir John is arguing with human arrogance and God/Author even knows what is happening to Sigismundo at this point. But at least he gets a pleasant show in the best of RAW fashions: the set dressing should be familiar. The light-skinned blond and the darker brunette- his affection for coitus reservatus, the hanged man and ejaculate. Lovely, old-fashioned stuff just like Grandpa’s stories.

We all live in different worlds. De Selby was right.

I don’t have much else to add this week. You all have been doing an excellent job in the comments picking up the piece I’ve still dropped.

From Eric: “This week’s soundtrack, a version of the EU theme song, comes courtesy of Toby Philpott with the caption, “BREXIT, Stage Left”. I think it fits in with the absurd nature of some of the footnotes in the novel.”
on February 04, 2020

I'm sure that RAW said somewhere that he likes pornography; could Chapter 20 be read as his opinion on how to consume it?

We find an excellent retort against the "scientific" attitudes Babcock responds to in Chapter 19 in the book, "High Weirdness" by Erik Davis on page 67 which I noted as "science policing its borders." He also makes a cogent rebuttal to the Occam's razor argument on page 135.

Chapter 20 begins with the question of identity of our imprisoned protagonist, Sigismundo or Joseph? Alias suggested in last week's comments that RAW didn't choose the name Joseph indiscriminately inspiring this gematria analysis:

23 = parted, removed, separated; the 23rd Hexagram from the I Ching = Splitting Apart or Breaking Apart

The authorities in control repeatedly attempt to split Sigismundo apart from his identity, his ego, in the material world. Also, according to many mythologies and religious belief systems, a splitting apart like this occurs at death. A splitting apart of the human identity and personality from that part or aspect of consciousness that survives death. The instructions found in the Tibetan or Egyptian books of the dead represent belief systems intended to guide this process.

The 23rd chapter in Crowley's "Book of Lies" analyzes the formula OUT. The advice to "get out" gets repeated six times. "Get out" seems like it would describe the dominant wish or desire for Sigismundo since his return to the Bastille. He does get out mentally, also perhaps emotionally with the sexual display he watches. Crowley gives a sexual interpretation to the OUT formula in the commentary to the 23rd chapter: 0 = yoni, T = the phallus, U = the Hierophant. RAW, once again, plays the Hierophantic role this time by describing prolonged sexual arousal without release.

The main text of Chapter 20 concludes with: "... but I still know they are my enemies. They do not mean well by me." We then get a lengthy de Selby footnote that concludes with mysterious "hammering" at de Selby's Dalkey house. Hammer = 291, one digit away from 290 which = "Thine enemy."

P. 273: "You should ponder this: What is the literal meaning of the stone that was rejected becoming the center of the arch?"

We find the cornerstone that was rejected has now become the center of the arch. This recalls previous comments about the Et in Arcadia Ego motto. The arc/ark homonym discussed there appears cognate with "arch." My speculation: The stone rejected by society = the spiritual component that forms the seed that alchemically grows an etheric body that survives death. That stone, like a rolling stone, becomes the center of the arch from one life through death into another life.

@Oz So the plotters are trying to split Sigismundo so he can be "reborn" as the center of their plot to use him for their own ends? That makes sense to me. That would also fit with making him the centerpiece of their arch, and would fit with a decision Sigismundo makes a little later in the book.

@Tom, that makes sense to me though I don't remember what happens next so I don't know why they wish to split Sigismundo's identity.