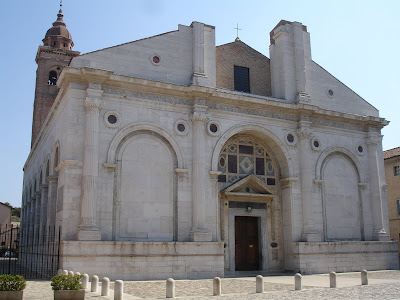 This week, please read from page 68, "There was a piece by Scarlatti, a Sonata in D Major, that was like the human soul trying to free itself from the vegetative and animal souls" to Page 89, "Nobody knows what they are really plotting, they are as enigmatic as cat's eyes." 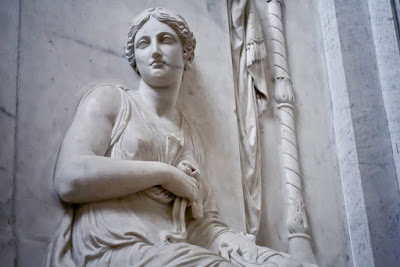 "...chiefly, it was Venus he saw ... There was only flesh and light and joy: golden flesh and clear light and pagan joy." Page 77. 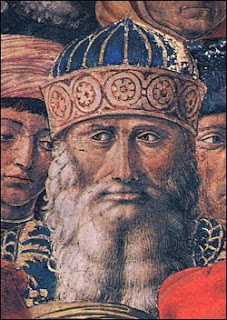 Gemistus Pletho, whose remains were interred at the Tempio Malatestiano. "He was a chief pioneer of the revival of Greek scholarship in Western Europe.[5] As revealed in his last literary work, the Nomoi or Book of Laws, which he only circulated among close friends, he rejected Christianity in favour of a return to the worship of ancient Hellenic Gods as well as ancient wisdom based on Zoroaster and the Magi." See Wikipedia article. 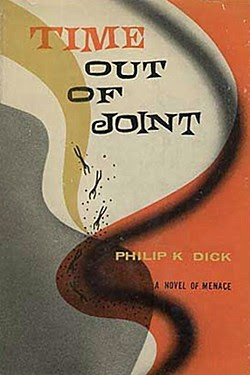 The phrase "time out of joint" is from Shakespeare's Hamlet, but also evokes the Philip K. Dick novel. " ... time has been stretched out of joint, not by horror this time, but by ecstasy." Page 81
on March 18, 2019

I noticed the Hamlet reference too. Both Sigismundo and Hamlet struggle to deal with a murder of an older close relative and both have close contact with the brother of the victim. Death seems quite present in other ways in both stories. I also suspect that the famous 3rd soliloquy from Hamlet, "To be or not to be ...etc." might have some relevance to SCs trajectory.

Time out of joint also turns up in "Kant's Critical Philosophy" (1963) by Gilles Deleuze. Actually it begins this book and is worth quoting. The Preface is titled: "On four poetic formulas which might summarize the Kantian philosophy"

"The first is Hamlet's great formula, 'The time is out of joint'. Time is out of joint, time is unhinged. The hinges are the axis around which the door turns. Cardo, in Latin, designates the subordination of time to the cardinal points through which the periodical movements that it measures pass. As long as time remains on its hinges, it is subordinate to movement: it is the measure of movement, interval or number. This was the view of ancient philosophy. But time out of joint signifies the reversal of the movement-time relationship. It is now movement which is subordinate to time. Everything changes including movement. We move from one labyrinth to another. The labyrinth is no longer a circle, or a spiral which would translate its complications, but a thread, a straight line, all the more mysterious for being simple, inexorable as Borges says, 'the labyrinth which is composed of a single straight line, and which is indivisible, incessant'. Time is no longer related to the movement which it measures, but movement is related to the time which conditions it: this is the first great Kantian reversal in the "Critique of Pure Reason."

RAW received the instruction to pay more attention to Time as he relates in "Cosmic Trigger I." In "The Earth Will Shake' in this instance, time gets stretched out of joint for Sigismundo from ecstasy. Ecstasy = Ex stasis = out of body; what Crowley means, imo, with the OUT formula (Ch. 23 Book of Lies).

Interesting synchronicity: watching Rachel Maddow considering whether to post this comment. She plays footage dated in the upper left corner: July 23, 1973 - the day RAW had his strongest contact with Sirius or a Pookah, or whatever.

7/23/1973 also marks the day of Monica Lewinsky's birth. John Oliver did a nice interview with her on St. Patrick's Day.

I wish I knew which D Major Sonata is referenced in the beginning of this section. I checked my Horowitz recording of Scarlatti and found three D Major sonatas! Eric is a musicologist; maybe he has an opinion.

Alas, I do not know.

PS Thank you for calling me a musicologist. No one has ever done that before. I sometimes think of that as my superhero name - The Musicologist! Perhaps he’ll show up in “Endgame” talking about Samuel Beckett the pianist.

I'm finding the book hard to put down once I've reached my allotted pages for the week. One thing that struck me about this section is the pretty deft parallels between this and Illuminatus! proper. I love that Siggy really is going through the same education program that Dorn/Goodman enter into in "The Eye in the Pyramid," simply in another part of space-time.

RAW's writing really picks up on pg 86 as Siggy is walking home and contemplating all the other people, the mystery and the confusion of life: "it is all glass, spinning rapidly, and it shatters easily."

Father Ratti and Siggy's discussion recalls the "alien game"/HGA exercise that Cagliostro plays with Benny Benedict in "The Universe Next Door:"I hate the world for being that way." "All decent men hate it. The question is, how do we change it?" Furthermore, echoing Caglisotro's reply that pain and suffering are typical of primitive planets...
the next page sent a chill down my spine when Ratti doesn't even know the word "genocide," which I believe was a neologism of the twentieth century. The bitter irony of Siggy saying that he believed "such things" only happen in primitive ages is a great way of forcing the reader to recognize that all people believe they live in "civilized" times, even in the benighted 18th century without its Internet and penicillin, and the fact that we hadn't developed the word genocide until much later than the books setting is terribly, deliciously damning for the contemporary reader.

The novel is really bringing me back to Joyce's "Portrait" with all of Sigismundo's Catholic worries- I remember RAW bases a sermon later in the book on the famous one heard by Dedalus.

While I know that the Jesuits were, and are, the basis for a lot of real world conspiracies and this means nothing, I like that their mention made me recall Pynchon's "Mason & Dixon" where there's oodles of Jesuit paranoia.

Back on p. 47 Sigismundo sees "LA TERRA TREMA," - The Earth will shake, written across a fence. He associates this with mass death in an opera: "... promising you that the stage would be thoroughly littered with corpses of tenors, baritones, basses, and sopranos at the final curtain." I wondered why, I don't immediately think of death in regard to this statement, the Earth will shake. I wondered if it might be a vestigial genetic memory of the catastrophe at Pompeii. I recently learned that Pompeii is right beside Naples. After seeing this graffiti enters a drinking establishment called Osteria Allegro which translates roughly as "happy restaurant" in Italian. Allegro is also a musical term indicating a passage get played at a faster tempo - interesting and coincidental because Sigismundo was just thinking about opera. Allegro also suggests allegory, something we might discover in this novel. Coincidentally, for me, Osteria Allegro recalls a great, metaphysical -type show on Netflix called OA, the second season of which got released yesterday.

p.79, the paragraph that begins, "'He had his own definition of God,' ..." recalls a book by John Lilly called "Simulations of God" in which he examines what people consider God by their actions and behavior, not by their professed beliefs. For instance, Lilly says, for some people money might be their real God, for others it could be sex, or drugs, or even music, etc. The end of the paragraph gives what I consider a major theme of this book: "'To our ancestor, Prince Sigismundo, whom I wished you to be named after, beauty itself was God.'"