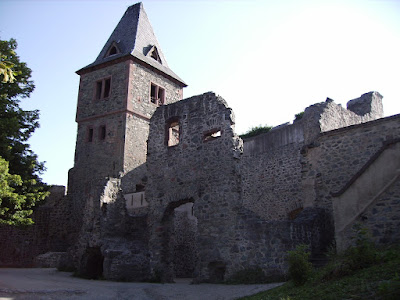 This week, please read from page 189 (the quotations from Patrick Henry and Jean Jacques Rousseau) to page 209 (the end of the March 31 letter from Sigismundo to Uncle Pietro).

There's something thrilling and also quaint about the idea of a book being so "dangerous" that you could get into trouble for  having it. l assume that in Sigismundo's day, there must have been many countries where that was the case (and few countries, such as England, where owning a book was relatively safe.) After reading the passages about The Key of Solomon, I tried to think of countries where having certain books in your possession could get you into trouble. Maybe North Korea and Saudi Arabia?

Frankenstein Castle is a real place and Wilson correctly explains the name. Read the Wikipedia article for the various colorful nonsense associated with the castle's history. You can also read about the alchemist Johann Conrad Dippel, who may have inspired some of the Frankenstein story.

Robert Anton Wilson had many different interests, and this particular section of the book shows how he wrote for students for magick, for libertarians and for readers interested in literature.

For students of magick: "Magick is just the art of changing the focus of consciousness at will." (Page 200).

For libertarians: Page 209: "I already begin to understand your ideas about free thought and free markets. By comparison with the general condition of Spain, our own Napoli seems rich beyond measure; what I thought was the abyss of abject poverty at home is the norm in Spain. And, correspondingly, the Inquisition is stronger and intolerance more entrenched."

For literary folk: Aunt Violetta's discussion of The Castle of Otranto by Horace Walpole. The Wikipedia entry says it is generally recognized as the first Gothic novel, and that the first edition claimed to be the translation based on an old manuscript from Naples.

I am intrigued Wilson took the time to mention the book; I might read the Project Gutenberg edition, or listen to the free Librivox recording.
on April 29, 2019

Hey Tom, while teaching my unit of Gothic lit last semester I began with excerpts from The Castle of Otranto. I had to make a chart for the students to keep up with the convoluted schemes and amors in the book. It's an okay read if you like Gothic fiction, which I know you do, but is a fairly turgid little book. I'll comment later when I've read this week's section.

p. 195 "I may be the most perfect approximation of pure idiocy since Quixote."

p. 207 "... and some scholars claimed that odysseus had met the Cyclops there. It was not a windmill in that case, but a real giant - even Dr. Vico said so.

I haven't read any Vico. Did he believe in the reality of the Cyclops?

Don Quixote has several mentions and references in our adventure. I've been considering tackling this epic since I saw it as a theme in Aaron Sorkin's "The Newsroom" a few years ago. Is it worth the time to read the whole book, or is it enough to catch the gist through secondary sources?

p. 194 Sigismundo has horrible thoughts about getting murdered. He invokes the four archangels from the Banishing Ritual of the Pentagram then goes home and plays some music to chill out. "And then, as if he had found a five-legged horse, he saw it. Beautiful, he thought." Beauty = Tiphareth 6. "It" has italics in this quote. Crowley equates IT with The Absolute in "The Book of Lies."

Comedic bits that made me chortle: "the bay was turning green as fast as a peasant girl's wedding ring" (which I haven't heard before and sounds like a Wilson-made faux-rustic aphorism) and "Uncle Pietro...agreed there was no city in Europe more beautiful than Napoli. There may be no city in the world with as many splendid views Sigismundo thought. I wonder if I should hire a food taster." I am really savoring Sigismundo's inner dialogue- I'd say it's as enjoyable as Bloom's.

I'm not sure if "The Key of Solomon" was the most notorious grimoire before the Mathers/Crowley collaboration. I'm also not sure if the names of grimoires would have been widely known enough for any of them to count as truly notorious. Maybe. But from what I can remember from my books is that something like "The Black Pullet" or the "Grimoire of Pope Honorius" would have been better known. Or even the Books of Agrippa (not the 1st-3rd but the "4th"). In the current iteration of the Key neither Set nor Beelzebub are in the names of the demonic Shemhamphorash. But grimoires certainly weren't distributed as a collated text and the names of the 72 demons have certainly been changed and switched over the centuries. Interesting that Frankenstein/Sigismundo's edition has 77 demons in its catalog. I also don't recall that there isn't an instruction to create homunculi in the "Lesser Key" (which is across the room and I just smoked so..) and believe that the "Greater Key" is concerned with planetary influences (haven't studied it ever) so this is an interestingly cobbled together edition- probably much closer to what an actual grimoire from the time would have been like. (Ah, Uncle Pietro notes what I have said more succinctly near the end of this week's reading having read 16 different "editions.")

The process of creating a homunculus, aside from general historicity, is very similar to a manner of conjuring a djinn given by Austin Osman Spare as the "Method of Plotinus" (although his involved the New Moon).

I like that Sigismundo's pondering on the provenance of Solomon's Key is a more elegant, condensed version of the investigation into the malign apparitions that plague poor John Babcock in "Masks."

The discussion about novels in the book and your observation about "The Castle of Otranto" being presented as a found manuscript ties into one another. The novel was more or less formalized in the late-seventeenth and early- to mid-eighteenth centuries. Because of the way the human brain has a hard time adapting to new forms of information, the maybe apocryphal stories about Windsor McKay presenting "Gerdie the Dinosaur" come to mind, many novels were presented as manuscripts, translations, or written in the epistolary form to entice readers who might otherwise be skeptical.

Aunt Violetta has good reasons to believe that "The Castle of Otranto" won't be translated into Italian very soon. Among the many tropes of Gothic fiction that books sets up one is a Southern European/Catholic Europe setting. While "The Castle of Otranto" was set in the Middle Ages, Gothic fiction, from Lewis to Radcliffe to Poe, was fascinated and repelled by Catholicism and the areas which the Church had in thrall.

Hey Oz- I really like Don Quixote. I just read the Bantam classic version, forget which translation, and really liked it. If you enjoy Rabelais I think you'd enjoy Cervantes. Amadis of Gaul is mentioned a lot earlier in the book and serves as an inspiration for some of the parody running throughout- I have a Ballantine book "Dragons, Elves, and Heroes" that has a short excerpt and a bit of context from Lin Carter that serves. I can always make copies.

@Oz and @Rarebit Fiend, I know I ought to read "Don Quioxote" but I haven't gotten around to it. I've tried to read many of the classics, but that's a big omission on my part.

Thanks for the info, Rarebit, I'm putting Don Quixote on my list of must reads. This discussion spurred the memory of a wooden statuary of Don Quixote on his horse with his long jousting pole that my dad put out wherever we lived. I loved Rabelais.

p. 207: "Guido Celine and Sigismundo left Napoli on a coldly sun-bright March day with the sea calm and the sky hopeful ..." The capitalized initials in the first phrase up to Napoli add to 121. 121 = 11 x 11. 11 = the number of magick. The next capital initial, M in March = the Hanged Man. An image of a hanged man begins this section and the tarot Hanged Man gets mentioned a few pages later on p. 194.

Crowley used Egyptian mythology in an attempt to have the world transition from a Christian mythology reliant on external authority to a world of self direction and self reliance. Deleuze points out that Plato always employed a Greek myth when explaining the source of his Transcendental Ideas - a bridge from the Ideal world to the actual world.

Beginning with the last paragraph on p. 204 that starts: "I have studied astrology ..." until the middle of p. 205 Pietro tells Sigismundo about his messianic destiny.

p. 206: Speaking about different versions of "The Key of Solomon" Pietro says: "There were some real principals of healing in some of them, but they were mostly drivel." Pietro reveals what he looks for in a grimoire.

This section's title: another tarot card called "The World." Near the end of "Gravity's Rainbow" the main antagonist, Blicero, has a tarot card reading done in Celtic Cross fashion. The final card, the resultant in this reading = The World.

Synchronistically, I saw a poster of Don Quixote this morning. Man, I love Bobby's illustrations of the tarot cards.

Uncle Pietro on pg. 204 says, "I have seen only three horoscopes that compare in any way with yours." I suspect he means Jesus's, Buddha's, and Mohammed's. This seems influenced by the passage on those three (and St. Paul as I recall) from Crowley's Book 4.