While I was visiting Apuleius Charlton recently, we went to the local "metaphysical/Wicca" shop, where I picked up a copy of Green Egg magazine with an uncredited but useful obituary for Robert Shea in it (Vol. 27, No. 105, Summer 1994). This blog is about Robert Shea as well as Robert Anton Wilson; see the "Robert Shea Resources" at the right side of this page. The Management] 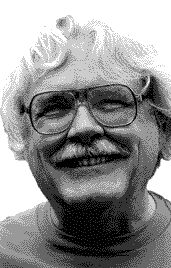 Bob Shea, co-author of the germinal Illuminatus! trilogy and author of many other historical and heretical writings, died of cancer in the arms of friends and his loving wife, Patricia Monaghan, after a sudden dramatic decline in his health. His last words before sinking onto a coma were, "Love is everywhere."

Robert Joseph Shea attended Manhattan Prep, Manhattan College and Rutgers University and worked as a magazine editor in New York and Los Angeles. In the 60's he edited the Playboy Forum where he met Robert Anton Wilson, with whom he collaborated on Illuminatus! After publishing Illuminatus!, Bob left Playboy to become a full time novelist. His novels include:

• All Things Are Lights, a story that entwines the fate of the Cathars of southern France with the occult traditions of Courtly Love and the troubadours.

• The Saracen, describing the intricate politics of medieval Italy.

• Shaman, tracing the fate of the survivors of the Black Hawk War in 19th century Illinois.

• Lady Yang, a tragic story of an idealistic empress of medieval China (forthcoming).

A celebratory reading of Bob's works took place on March 26 in Winnetka, Illinois. More than a hundred people attended and many, including Bob's collaborator and dear friend, Robert Anton Wilson, spoke during the meditative interlude of Bob's friendliness and curiosity, cheerfulness and courage.

Patricia thanks everyone for their support, especially those who participated in Pray for Shea Day (Feb. 14, 1994). She assures us that, "It may seem like the prayers of hundreds of well-wishers went for naught. Certainly I had hoped for a dramatic improvement in Bob's health as a result of prayer day ... Yet curiously I believe our prayers may have been answered, for Bob's death was a quiet one and he was very happy in the days before it."

In the next few years, several more of Bob Shea's works will be published, including a collection of essays. Patricia requests that anyone having copies of Bob's work from magazines or other publications, or having letters from him which might be publishable, to please send copies to her at 1625 West 101st St., Chicago IL 60643.

Memorial contributions may be made to the Cancer Wellness Center, 5150 Gulf Road, Skokie IL 60077.