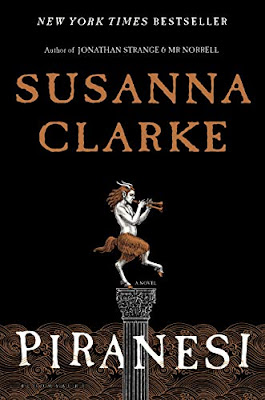 These are actually not all books published in 2020 -- I have chosen to include some books I read on the Hugo ballot that were published in 2019. But still, there are all pretty new books, and older books I really liked read in the past year are included in the "I also liked" paragraph.

Piranesi, Susanna Clarke. I was really starting to wonder when we were going to get another novel from the author of Jonathan Strange & Mr. Norrell. Piranesi is very strange, very vivid, rather like a waking dream, about a man who lives in a gigantic, flooded palace, so big it is a world to itself.

Middlegame, Seanan McGuire. As I wrote earlier this year, the Hugo ballot for best novel was quite good this year, but this riveting fantasy novel, by an author I had never encountered before, was my favorite.

A Memory Called Empire, Arkady Martine. This is the novel that won the Hugo Award, and it was another one on the ballot I particularly loved. It's a space opera, but a very literary one, and it shows how an empire can "rule" through culture, rather than just power.

Network Effect, Martha Wells. The first full length novel (the previous ones were novellas). Any science fiction fans who doesn't read these books is making a mistake. They can also be read as future thrillers.

Death Sweat of the Cluster, Znore. Still finishing this, but the essays I've read so far are remarkable. I'd like to see Znore get more attention for his discussion of RAW and conspiracy theories, what to make of Ezra Pound as we go into the new century, etc.

There were three editions of RAW published this year, The Starseed Signals. Ishtar Rising and The New Inquisition. I bought and read all of them and look forward to getting Sex, Drugs and Magick: A Journey Beyond Limits soon from Hilaritas Press.