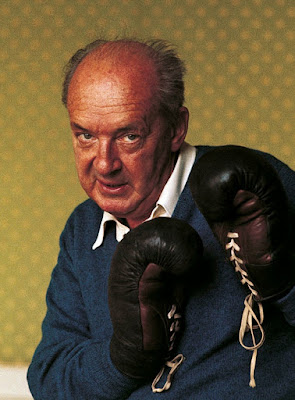 Vladimir Nabokov in the 1960s. Via Wikipedia, described as being in the public domain in Italy.

Pale Fire is a Jack-in-the-box, a Faberge gem, a clockwork toy, a chess problem, an infernal machine, a trap to catch reviewers, a cat-and-mouse game, a do-it-yourself kit ... This centaur-work of Nabokov's, half-poem, half-prose, this merman of the deep, is a creature of perfect beauty, symmetry, strangeness, originality and moral truth.

Pale Fire, Vladimir Nabokov's 1962, was published seven years after Nabokov's best-known work, Lolita, a best seller that allowed Nabokov to retire from his job as a college professor at Cornell University in Ithaca. Pale Fire is a personal favorite of many Nabokov fans,  including me. Brian Boyd, arguably the world's most important Nabokov scholar, calls it Nabokov's finest novel.

For the first week of the discussion, please read the Foreword. It's only 12 pages of text in my paperback copy of the book.

Pale Fire has an unusual format for a novel. It consists of a poem, "Pale Fire," a poem in four cangtoes ostensibly written by American poet John Shade, that takes up about 25 pages of text. The rest of the book is a discussion of the book by a college professor and friend of Shade's, Charles Kinbote, who evidently, like Nabokov was, is a literature professor from Eastern Europe who has come to America and taken a job at an American university. Pale Fire has a Foreword, the poem itself, a long Commentary section, and in Index.

The Foreward is a good introduction to the book as a whole, and whether you find portions of it funny and interesting is a good clue to whether you should go on with the rest of the book.

The first paragraph is a precise and careful discussion of the physical manuscript of the poem, just as you would expect from an English professor from an upper tier American university, but it's not long until the professor begins to inject himself into the manuscript in inappropriate (and hilarious) ways. In the third paragraph, Kinbote suddenly writes, "There is a very loud amusement park right in front of my present lodgings."

The rest of the Foreword mixes appropriate discussion of the matter at hand with personal anecdotes that introduce the reader to Kinbote and his situation and to his friend and late colleague, Shade. There's soon an indication that the book involves much more than an academic monograph on a poem: "...I was forced to leave New Wye after my last interview with the jailed killer." (Page 4. All of my page numbers are from an old Berkley mass market paperback; I hope the page numbers will be at least close to whatever edition you are reading.)

Page 4: Note that Kinbote refers to having to find "a new incognito." He writes the Foreword from a motel in Cedarn, Utana, a fictitious Midwestern state.

Page 7: The Foreward has totally inappropriate references to Kinbote's sexual interest in young men: A girl student is "pulpous," but a boy is "delicate" and "rather wonderful." When the department chairman on Page 9 calls him in to discuss a complaint by a boy to the student's advisor, Kinbote laughs "in sheer relief" to find out it's only about Kinbote's disparagement of another professor.

Page 10: Another premonition of what's to come: A woman in a grocery store tells Kinbote, "What's more, you are insane."

I enjoyed the passages which highlight Nabokov's gift for vivid description, as in the view from a New York skyscraper, "in the midst of a vast sunset (we sat in a cell of walnut and glass fifty stories above the progression of scarabs)" Page 4.

"... the suburban house (rented for my use from Judge Goldsworth who had gone on his Sabbatical to England" (page 5). Nabokov himself never owned a house, but instead stayed in the homes of absent college professors and in other temporary lodgings. He lived from 1961 until his death in 1977 in a hotel in Montreaux, Switzerland.

I find it interesting that the book opens with a quote from Boswell. Our Wilsonian community has a Dr. Johnson, and I see myself in a Boswellian position, both to him and to Dr. Wilson. Pale Fire makes me uncomfortable. My obsession with Wilson parallel’s Kinbote’s obsession with Shade. (Does he found Xavier’s School for Giften Children after losing the use of his legs?)

On page 13 of the Vintage paperback I got for Christmas, Kinbote refers to Canto Two as “your favorite”. I wonder what sort of reader he imagined.

Pg. 15: Perhaps they will feature “the disheveled old poet’s jerky shuffle” on Dancing with the Stars.

William Carlos Williams said he intended Paterson to have four parts, but he later added a fifth.

I genuinely laffed out loud the third time the "very loud amusement park" music is mentioned. Kinbote seems already more daft than de Selby (to me), when we encounter Kinbote explaining his personal sense of time in his "friendship" with Shade:

"The calendar says I had known him only for a few months but there exist friendships which develop their own inner duration, their own eons of transparent time, independent of rotating, malicious music." -p.11 in my battered ppbk ed. from Lancer.

The crazy "rotating" sound of amusement park music as background to Kinbote's Foreword? To quote Homer Simpson, "It works on so many levels!"

Wikipedia says Nabokov's birthday is April 22, 1899. Pretty close to the 23rd. I don't have another reference handy.

Shade was born and died in the same month, just like RAW. Nabokov also died in July.

I just finished yet another viewing of _Laura_ (1944 Preminger), and can't help but hear and see a lot of Waldo Lydecker in the Charles Kinbote persona, although Lydecker wasn't obviously homosexual or as "mad" as Kinbote seems.

But Wittgenstein might say yea, there's a family resemblance.

I love the idea of Preminger directing "Pale Fire". I can see the cop with the handheld baseball game investigating Shade's murder.

Jumping right into Pale Fire with a head full of Grapefruit Bubble Hash was a pleasing experience(although,i did have to re-read a few paragraphs)...I feel like a dunce around you seasoned Nabokov folks but i am honored to be here and look forward to experiencing Nabokov's prose for the first time with you all. Onward!

Shade's murder makes me think of John Lennon's murder and of the film "Chapter 27" about the killer's activities the day before killing John. I only watched part of the movie - it disturbed me.

I received Pale Fire from Amazon yesterday after unsuccessfully looking for it at local new and used bookstores. Have not read Nabokov before I only had the chance to read about half of the Foreword yesterday so haven't reached the part about how Shade died.

Synchronicities dog me. Found it interesting that Shade's death is mentioned on the first page, that he started the poem shortly before he died. The loud amusement park holds significance for me. Amusement parks are considered bardo spaces (i.e. spaces that convey the mood of death or the bardo). A few days after my father died, I was told by a psychic I trust that he had entered a carnival-like environment in his bardo trip, that he must have been thinking of some such memory when he crossed over. So this amusement park atmosphere mentioned right after Shade's death makes me think this novel will have a bardoesque aspect to it.

This morning I got a voicemail informing me that an old friend, Hassan Heiserman had died. It was an anonymous call from someone who'd seen a blog I wrote about Hassan. Hassan knew Leary and also said he had done something with RAW at one point. I don't have any details or even know if it is true.

This sentence from page 24 jumped out: "Actually, it turns out to be beautifully accurate when you once make the plunge and compel yourself to open your eyes in the limpid depths under its confused surface." I recently posted a blog about the philosophical images of the heights, depths and the surface.

I always learn something when I read Oz Fritz. I did not know that amusement parks are considered bardo spaces. When Oz reads John Shade's poem, he'll discover that it's all about death.

Amusement parks loom large in my life. I work for a newspaper in Sandusky, which is the home of a prominent amusement park, Cedar Point.

Is this "make the plunge" comment of Kinbote's a knowing reference to Shade's daughter's fate or just an unfortunate turn of phrase?

The reference to Marat in line 894 made me think of Bob Wilson's essay "Thirteen Choruses for the Divine Marquis" in Coincidance.

Trying to catch up as I'm a little behind...

The Foreword struck me as neat, clever prose portraying Kinbote as an alarmingly obsessive, snooty, highly intellectual creep. I felt immediately drawn into the detective story developed by the little clues Kinbote drops about Shade’s death and his poem.

Some other things I noted:

- Kinbote comes across as a lunatic. His conflicts with fellow Shadeans (accusing them of “fake news” on the second page), his snooty view of his colleagues, the degrees of his obsession with Shade, confronted as “a remarkably disagreeable person,” and the bizarre bit about his basement recreation on double table-tennis tables—it all paints an amusing yet disturbing portrait. I was kind of mesmerized by VN’s authorship of all this through a first-person, overwrought Foreword.

- some of the language in the Foreword is gorgeous, stirring prose. I was especially struck by this part on pg 27 (in my apparently divergent edition) about other people taking Shade’s physical presence for granted “instead of drenching every nerve, so to speak, in the romance of his presence. Here he is, I would say to myself, that is his head, containing a brain of a different brand than that of the synthetic jellies preserved in the skulls around him.”

and this: “Shade’s poem is, indeed, that sudden flourish of magic: my gray-haired friend, my beloved old conjourer, put a pack of index cards into his hat—and shook out a poem.”

- Kinbote’s recommended approach to reading the poem & commentary was funny because on the one hand he is clearly whacky and overobsessed while on the other this could be Nabokov giving clues on how best to approach his book. I fell on the side of the former.


(Sorry this is so long. I’m excited to participate in this.)