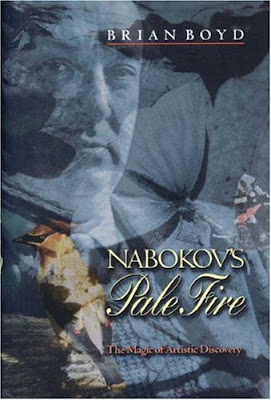 I recently finished Brian Boyd's Nabokov's Pale Fire: The Magic of Artistic Discovery. Boyd, an English professor at the University of Auckland in New Zealand, arguably has no peer as a living Nabokov scholar and gives a close reading of the book. He convincing demonstrates that the book has clear references to works such as Shakespeare's Timon of Athens, Sir Walter Scott's The Lady of the Lake, Robert Browning's Pippa Passes, T.S. Eliot's Four Quartets and "The Waste Land," and other works. If you don't think reading an entire book of literary criticism can be entertaining, Boyd's book might change your mind.

In the bulk of the book, Boyd discusses the theory that I also have endorsed, that the actual author is V. Botkin, an offstage minor character, who invents both Charles Kinbote and the exiled Zemblan king and who commits suicide after writing his deranged commentary.

In the last part of the book, Boyd offers a further theory that the ghosts of John Shade and his daughter, Hazel -- shades of the Shades -- helped inspire the composition of the book. For those who think that it's an unlikely theory, Boyd discusses "The Vane Sisters", a short story which features an acrostic that has a message from two sisters who have died. (Nabokov had to point out the acrostic after The New Yorker magazine rejected the story.)

Incidentally, Brian Boyd knows who Robert Anton Wilson is, or at least has heard the name.

I wrote to him recently, noting that I could find only very expensive copies of his book about Nabokov's Ada and asking for an ebook edition. I mentioned my blog and the online reading group for Pale Fire and explained that I usually write about Robert Anton Wilson.

Professor Boyd pointed to me to where I could find an ebook of his Nabokov's Ada: The Place of Consciousness, and pointed out his free Ada website, which has very detailed annotations on the novel. He ended, "Enjoy, and keep blogging. I have very little time to read for pleasure but I'll keep my antenna alert for more on RAW."

Looking ahead to the next reading group: California author, English teacher, Jeopardy game show champ and RAW scholar Eric Wagner has volunteered to lead an online discussion group at this blog focusing on Joseph Kerman's classic study, The Beethoven Quartets. Expect discussion that will included Beethoven and the book, but also Robert Anton Wilson's deep interest in Beethoven.


About the Kerman book, Eric says, "I gave copies of this book to both Robert Anton Wilson and Rafi Zabor. I took a copy of it with me when I appeared on Jeopardy."

Eric is the author of An Insider's Guide to Robert Anton Wilson.

I expect to be able to check my copy of the Kerman book out of the excellent local library system I use, renewing it as necessary -- that's what I did with the Brian Boyd book -- but I'm putting the reminder up here to give the rest of you time to make necessary arrangements.

And what should we do beyond? The answer, I think, comes from Hilaritas Press, which has new editions coming out soon of the three "Historical Iluminatus" books and then will do the two Cosmic Trigger sequels. They would certainly be a good focus for online discussions.

I read the Boyd book on Pale Fire and Pitzer's _The Secret Life of VN_ and enjoyed and was impressed by both books.

Reading has always been a refuge for me; with world events (especially in the US) being what they've been, it's become a quite precious refuge. Made consciously so.

Thanks for suggesting reading Pale Fire in a RAW blog. It turned out to seem more...appropriate than I'd thought.

And thanks for the thoughtful, learned and esoteric readings by my fellow commenters!

Completely agree on Boyd and his books on Ada and Pale Fire. I look forward to his promised study of Karl Popper, another fave.

I would also like to thank everyone for their helpful contributions in the comment sections. I didn’t contribute much to the conversation on this one as I have just been soaking it all in.

I agree in considering reading a precious refuge. I also agree this reading group has turned out “more...appropriate than I’d thought.” I can’t wait for the Beethoven group.

So happy to have read this one; I expect I'll read this a few times more. Awesome suggestion with fun/insightful external resources both in the posts and in the comments!

I enjoyed Pale Fire and this reading group immensely. Thank-you,Tom and everyone. I agree with Michael and Eric that this seemed far more appropriate for a RAW blog than expected. I was originally not going to participate due to a busy schedule and no prior interest in Nabokov. Something Eric wrote in one of the early comments changed my mind.

I wonder what other books by Nabokov have labyrinthine qualities like Pale Fire? What would be next to read from him?

I recently read M Train by Patti Smith and found it another excellent reflection on death, mostly the death of her husband Fred "Sonic" Smith. She has a brilliant poetic style to her prose coupled with a ton of literary references. Another book I found excellently complements Pale Fire is The Fold - Leibniz and the Baroque by Deleuze.

Discovering that Nabokov's father was also senselessly murdered got me thinking that Pale Fire appears a good example of Nietzsche's concept amor fati - love your fate. When something tragic happens in your life, make your life worthy of that tragedy happening to you. In Nabokov's case, he took a family tragedy and turned it into didactic art. One could have a similar perspective with Cosmic Trigger I.

@Oz, I don't know that there is anything in Nabokov's work quite like "Pale Fire." "Lolita" is obviously the best known novel. "Ada" is very interesting, and there's also a Brian Boyd companion book for it. I like all of the Nabokov novels I've read so far. He also did nonfiction, including criticism discussing Joyce's "Ulysses" and other classic works.

I've read a few Nabokov novels but thus far nothing has compared to his omnibus collection of short stories. Most are excellent, many are sublime. I especially love these stories:

Revenge
The Thunderstorm
The Dragon
The Reunion
Signs and Symbols
Scenes from the Life of a Double Monster
A Matter of Chance
Recruiting
A Busy Man, Terror
The Potato Elf

@PQ what is the title of this omnibus collection?