I am interested in how people use technology, so I enjoyed reading Tyler Cowen's recent blog post, "My personal tech ecosystem, updated." He hates texting, carries his iPad wherever he goes, doesn't use his smartphone very much. 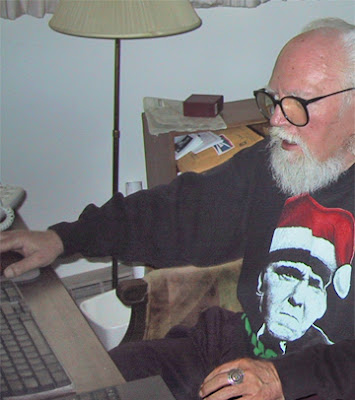 This naturally made me wonder what RAW's personal tech ecosystem was in the last few years of his life, so I made inquiries. Here is what I learned.

Bob was very enthusiastic about new technology. He loved the idea and potential of Internet. Sadly, he never had enough money to really explore new tech products. His computer from 2000 on was a 2000 Orange Jelly iMac. I don’t remember what he had before that, but it was also a Mac. I remember one day visiting Bob and Arlen in their Brommer St apartment in Capitola in 1995. I think Bob had just gotten his first email account, but he was having trouble getting it to work. I checked his email settings, and they seemed okay. The next day I got this email from him:

This is just a test. If they don't send it back, then I finally
got your email address right and I'll send a letter that
has gotten rejected for wrong address twice now...

As a reply, I sent him a list of famous people’s answers to "Why did the chicken cross the road?” Bob was one of the famous people in the list which was diverse to say the least. Some of the other famous people were: Machiavelli, H.P. Lovecraft, Douglas Adams, Aleister Crowley, Carl Jung, Buddha and Werner Heisenberg. The entry someone wrote for Bob was not very inspired:

Because agents of the Ancient Illuminated Roosters
of Cooperia were controlling it with their Orbital
Mind-Control Lasers as part of their master plan to
take over the world's egg production.

Maybe Bob liked it, but in any case, instead of offering his response to the question, he sent the following email:

Thanks for the chicken jokes. A few more I thought of:

Thomas Jefferson: All hens are endowed by Nature and Nature's God
with certain unalienable rights, and among these are life,
liberty and the pursuit of the other side.

James Joyce: An ova eggspressed! Mrs. Hahn, Cock's wife,
flapped up a stormin drang (one louve, one fear) and, like
any tennis son, charged like a lewd brigade, clucking
and clacking like a horsenfifer, nobirdy avair soar
anywing like that load allmarshey.

Oscar Wilde: This chicken problem has many depths,
but all of them are equally shallow.

Charles Fort: Of course, I have heard of the "fourth dimension" but
whatever is wrong with me has not advanced to the point where I will
offer it as an explanation in a case like this. Maybe the damned
chicken just wanted to see the other side.
Maybe.

Hannibal Lecter: I ate her liver. With fava beans.
And a fresh cranberry sauce.

Bob took very quickly to email, and his list of a little more than 20 friends expanded to about 40. That group became known as the GroupMind. I’m not sure who coined the name, perhaps Dr. Foo.

Before the iPhone, probably at the end of 2002, I got a Palm Tungsten T5 where you could write out text by hand. It wouldn’t be translated into editable text, but at that time seeing your handwriting on your Palm device was pretty cool. In this photo I was showing Bob the new Palm and he was delighted to see his handwriting on the screen. 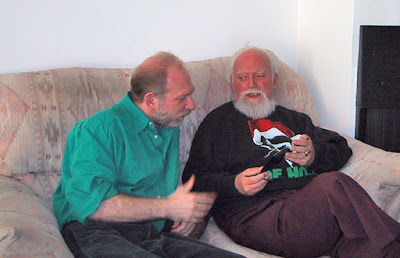 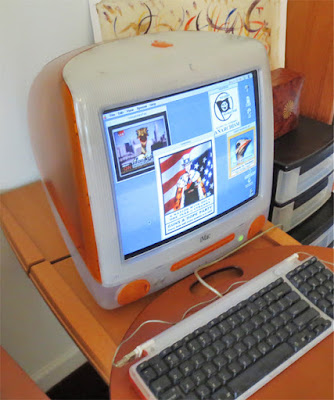 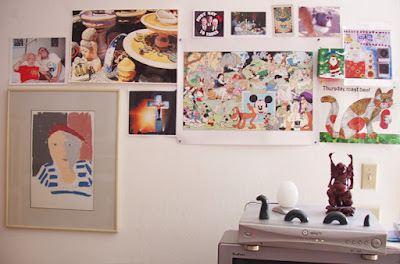 "As far as video, Bob had a TV, a cable box and a VCR. This is a photo of the wall across from his couch in his Park Ave, Capitola apartment." Photo courtesy Rasa. 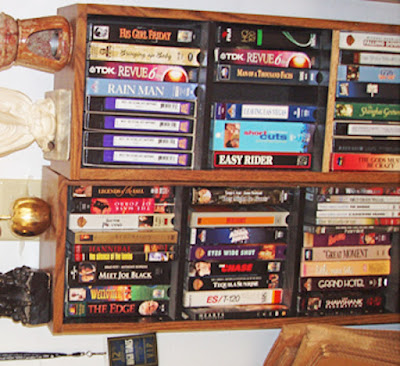 "Here’s a photo of Bob’s video shelf, turned sideways so you can more easily read the titles. Not the best photo. This one and the one above were used when we set up the auction some years ago." Photo courtesy Rasa.

When Bob became very weak, and Doug Rushkoff asked Bob’s fans to help him out financially, some of the money went to getting Bob a new laptop, a 17in Macbook Pro. It was a bit of a monster in Bob’s lap as he sat up in bed to use it. He didn’t do a lot on that machine, aside from surfing, he used it to send out his last few messages to family, friends and the world. Bob’s son Graham ended up getting that computer.

Apparently, he never had a cell phone. From Rasa, again:

As far as I know he did not have a cell phone. I think he really didn’t need one, and in the last months he was not going anywhere. In any case, a new bill arriving each month was probably not an option. I hate to paint such a sad picture concerning his finances. After Arlen died, he lost a lot of interest in the mundane aspects of life, like paying bills and taxes. Getting such a crappy deal from New Falcon Publications certainly didn’t help. He could get grumpy in the face of it all, but Christina once told me that at one point Bob had a realization. He saw himself being grumpy, and also saw his health declining. He told Christina, "Why would anyone want to help me if I’m being an ass?” He made a conscious decision to change his attitude. I’m sure he had many moments of deep sadness after the loss of Arlen, but with his friends he let his magnificent intelligence and generosity of spirit shine brightly.

I only visited Bob's home once, an apartment in Southern California in 1989. My cousin CJ and I picked up Bob and we had lunch. I planned to visit Dublin in a few months, and Bob drew a map of Dublin for me and made some suggestions about things to do on my trip. Bob had a computer then, but he felt scared of email because of potential viruses. He did enjoy playing sound clips - Monty Python, etc. - on his PC. He switched to Apple products a few years later and he said he preferred them.

I remember the wonderful emails Bob would send out to the Groupmind. Reading the Tail of the Tribe document reawakened those memories. Man, Bob would send out multiple emails every day. I remember when the Maybe Logic Academy started Bob said he would cut down on his emails. I mentioned to him how much I would miss them, so he arranged for me to take one of his Maybe Logic classes for free.

I remember Bob had an AOL email account, but he got blocked for something he posted. They said they would reactivate his account, but he felt censored and switched email accounts. I remember he had at least one fake email - Mark Chan. He would use it to make comments at alt.fan.rawilson and on our online Quantum Psychology group read.


I enjoyed rereading Bob's comments on the Cantos in The Tail of the Tribe. It brought back memories of typing in each Canto to mail out to our reading group, which included Bob Wilson and Mike Johnson.
on September 02, 2016

Awesome post, Tom. The antithesis of the Oscar Wilde chicken joke, which reminds me of Facebook somehow.

Also, there was an email from around 2000, when Bob mentioned the things he does when he gets up in the morning. One of them was: scan the movies on Turner Classics to see if there was anything coming up that he wanted to watch yet again.

Also, there was an email from around 2000, when Bob mentioned the things he does when he gets up in the morning. One of them was: scan the movies on Turner Classics to see if there was anything coming up that he wanted to watch yet again. One of the industry's best trucking company.