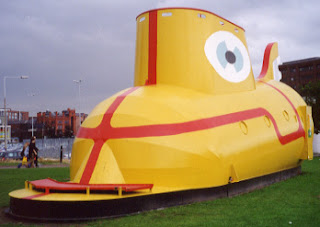 In Illuminatus!, Hagbard Celine remarks that the "yellow submarine" he operates is "right out of a rock song."

Robert Anton Wilson never offered much evidence that he paid close attention to pop music. In John Higgs' excellent KLF: Chaos, Magic and the Band Who Burned a Million Pounds, Higgs relates how he met Robert Anton Wilson while researching his book on Timothy Leary, and took the opportunity to ask RAW about the KLF, who of course recorded songs that referenced Illuminatus!, including "Justified & Ancient (Stand by The JAMs)" . Wilson claimed, "I've never heard of them."

On a hunch, I emailed Mike Shea about what kind of music his dad, Robert Shea, listened to and whether his father was a Beatles fan. Here is the relevant part of Mike's answer:

My dad listened to a ton of classical music while writing. He had piles of tapes recorded back to back with classical music. He found that any sort of dialog in his music hurt his ability to work with words on screen. 30 years later, I’ve found the same thing. I listen to video game music tracks. I have a playlist with 49 hours of video game music on it I listen to while writing. I bet he’d have loved that.

My dad was a HUGE Beatles fan (as am I!). My mom shared the story about how he waited and waited for the White Album to come out. He was the first to buy it, take it home, and listen to it non stop. It blew him away.