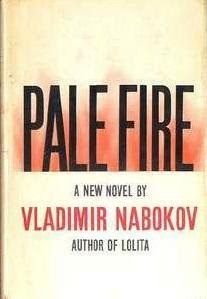 This week: Please finish reading the book, if you have time. But there will still be another couple of weeks of discussion.

I lean toward the theory that the narrator is actually V. Botkin, the "American scholar of Russian descent" in the index, whose name, as the index records, can be turned around to make "kingbot," the maggot. In this reading, Botkin is crazy and imagines himself as both the exiled king of Zembla, and as a professor under the pseudonym Charles Kinbote. He writes the book and commits suicide afterward.

At the end, the narrator imagines writing a play that includes "a lunatic who intends to kill an imaginary king, another lunatic who imagines himself to be that king, and a distinguished old poet who stumbles by chance into the line of fire ... "

At the end of the book the narrator grudgingly refers to what really happened: Jack Grey escapes and attempts to kill the judge who put him away, Judge Goldsworth, in whose house the narrator is living; by mistake he takes Shade for Goldsworth.

This theory also fits his admiration for suicide expressed at the end of the book ("God will help me, I trust, to rid myself of any desire to follow the example of two other characters in this work.") One of those characters would be Hazel Shade, who in the index "deserves great respect, having preferred the beauty of death to the ugliness of life." (The other person who kills himself is the assassin, Jack Grey).

Nabokov said in an interview, that Pale Fire "is full of plums that I keep hoping somebody will find. For instance, the nasty commentator is not an ex-King of Zembla nor is he professor Kinbote. He is professor Botkin, or Botkine, a Russian and a madman."

For a rundown of various interpretations, see the Wikipedia article.

Comment to line 991: I know the reference to "the five families" does not mean organized crime, but so it goes. I hear they may make a movie prequel to "The Sopranos".

The index entry for Botkin points to line 71, whose commentary describes the young king discovering photos of an airplane crash. I wonder what J. G. Ballard would have made of that? I wonder if he read this book.

The index entry for Igor II includes the word "catamite" which means "a boy kept for homosexual practices". Mr. Nabokov has quite the vocabulary, as does Botkin (or Botkine).

The index entry for Marcel makes me wish we would do a study group on Proust.

I wonder about the name of the leader of the Shadows mentioned in the index entry for the Shadows.

Yes, the ending seems quite ambiguous. I interpret this line to mean that the narrator does not wish to commit suicide:

"God will help me, I trust, to rid myself of any desire to follow the example of two other characters in this work."

Regarding "catamite," a few weeks ago I told someone about this discussion group. When I mentioned "Pale Fire," they heard me say pedophile. I didn't think anything of this sonic resemblance until later that week when I began noticing references to pedophiles, seeing about 4 or 5 since then not including mention of Lolita which I assume also covers the pedophile subject - I haven't read it. This fits my 'Against the Day" narrative. We can become children in the transformational work that appears a not so hidden agenda of "Pale Fire." This can symbolically portray as Horus - the Crowned and Conquering Child. Any sexual deviancy toward this child resists and/or helps destroy the transformational work - against the Day.

Arcady gets another mention on p. 279: "the motives, of our 'automatic man" ... was, in a word, further removed from our sunny, green, grass-fragrant Arcady." Arcady could appear as another reference to the Crowley world as it comes up in perhaps his most famous poem, "Hymn to Pan":

Thrill with lissome lust of the light,
O man! My man!
Come careering out of the night
Of Pan! Io Pan!
Io Pan! Io Pan! Come over the sea
From Sicily and from Arcady!

Arcady gets defined as "an ideal, rustic paradise."

On a personal note, my god-daughter's name is Arkady. She was named, partly, after a character from Asimov's "The Foundation Trilogy" who was a liaison, or mediator between the culture of psychics and the culture of scientists.

@Eric, I've never attempted Proust. Are you a fan?

@Oz, Certainly the ending is ambiguous and open to different interpretations! I'm reading Brian Boyd's book about Pale Fire right now, and it explores the various theories about the book proposed by academics. There's one theory that Kinbote wrote the commentary AND the poem, but also a theory that Shade wrote all of it.

Lolita certainly is about another pedofile, albeit one who likes little girls and likely would not have hidden away the photos of Judge Goldsworth's daughters.

Since you once gave a book to Sting:

Thought I'd point out Vladimir Nabokov is mentioned in a Police song, "Don't Stand So Close to Me," which rhymes "shake and cough" with "Nabokov."

@Tom, prior to this group, my knowledge of Nabokov consisted solely of that Police lyric which refers to "Lolita."

Nabokov returns to the theme of teaching in these last pages:

"and College Town was gay with summer students and visiting linguists, among whom Gradus might have easily passed for a salesman hawking Basic-English primers for American schoolchildren or those wonderful new translating machines that can do it so much faster than a man or an animal." (p.281)

Those machines probably refer to computers - quite prescient for the early '60's. "... hawking Basic English primers," likely refers,in my opinion, to Qabalah - the basic language of magick. Hawk = Horus. I wrote a fairly recent blog regarding the close connection between linguists and magick. Horus and the qabalistic primer this novel functions as reminds me that RAW has a character in Illuminatus! named Doris Horus (the door is Horus). Grokking Pale Fire can teach readers how to better comprehend the fiction of RAW and Joyce among others, both of whom use qabalah extensively.

Yes, I love Proust. I tried him a number of times over the years without much success. At the age of 48 or so I decided I wanted to finish his monster before I turned 50. I succeeded, and then I read it again. I've made it about a third of the way through on my third trip through. I now consider him my favorite writer. I study a little French every day. I hope to read him in French one day.