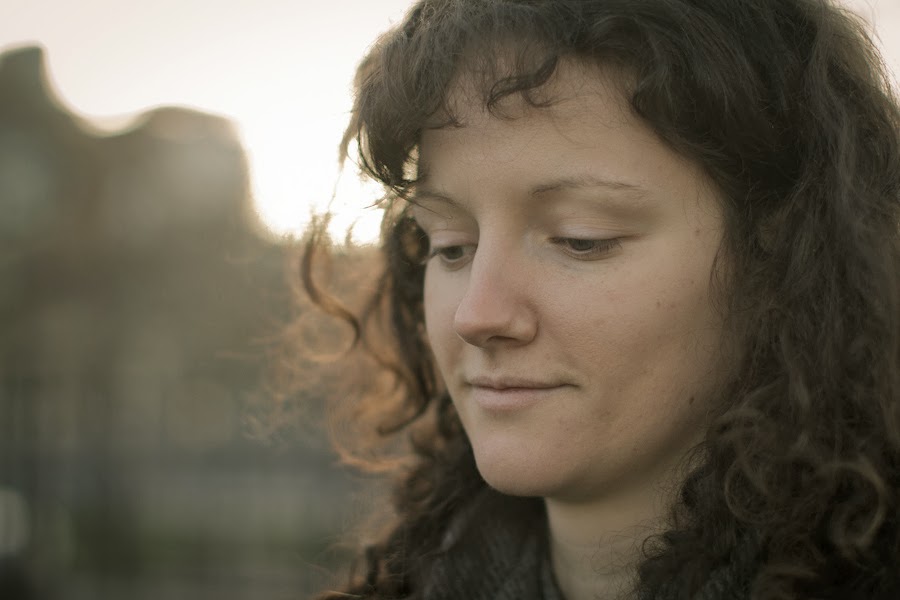 Caroline Contillo is a meditation teacher associated with  The Interdependence Project, a nonprofit Buddhist meditation center in Brooklyn, N.Y. She teaches mindfulness meditation, a form of Buddist meditation also known as Insight Meditation and Vipassana. She is also a stand-up comedian, artist, writer, political activist and probably a few other things I've missed. Apparently she has a reputation for  being fashionable as well as enlightened. Oh, and she's also influenced by Robert Anton Wilson. Here is a description of Caroline in her own words, "I'm a multidisciplinary artist, perfomer & writer based in Greenpoint Brooklyn.  I'm also a queer feminist and practicing Buddhist, interested in social change via decentralized movements like Occupy. I'm also interested in making the tools of Buddhist mindfulness meditation accessible to anyone who is interested." Her clear and useful instructions for getting started in mindfulness meditation are here.
I ran into Caroline on Twitter; somebody I follow had retweeted her Tweet advising everyone to read Quantum Psychology, which she said had helped her overcome depression. I tracked down Caroline via her official website and asked if she could tell me something more about her interest in QP, and she responded by sitting down and writing the following piece. I deeply appreciate her generosity in writing this. -- The Mgt.


How Quantum Psychology changed my life

In my early twenties I was, like many people in their early twenties, teetering on the edge of nihilism. I'd been disillusioned by my Catholic upbringing. So many questions about the nature of belief and the human mind were squelched in Bible study classes. I'd been a politically active teenager, but I'd even grown disillusioned with the efficacy of direct action in the face of George W. Bush and his war. I'd left college and was working in a freelance capacity for a major finance website. I drank heavily and sought solace in film. I was lucky to have a friend who was quite interested in what I'd call cognitive liberty. It seemed like there was a thread in some modes of thought, some philosophies, a thread of liberation from ignorance. We'd discuss this over drinks, late into the night. And then he lent me Robert Anton Wilson's Quantum Psychology, and everything changed for me.

What first interested me in RAW's nonfiction work was his take on what he would call "creative agnosticism." Belief was almost beside the point. In fact, why had I always taken it for granted that I should believe my thoughts? It could be much more interesting to learn to learn, as in mindfulness meditation, to observe them and then let them go, with judgment-free ear for what was interesting about them. As much as I was interested in science fiction, performance art, mystical and shamanistic traditions, it never really sunk in with me that my experience of reality was not the only way a person could experience it. That my perspective was not me, and that I could easily begin to set feedback loops into motion that would help me shift my perspective intentionally towards a more open relationship with things as they are.

Robert Anton Wilson's Quantum Psychology didn't merely lay out the principles of cognitive liberation, it provided exercises I could easily use in order to realize these things for myself. One of the early exercises in the book really struck me. I could take a large number of small objects and categorize them in several different ways. These are objects that cost more than ten dollars, and here are the objects that cost less than ten dollars. These objects have plastic in them, these objects don't. These objects have names that begin with a vowel, these objects have a name that begins with consonant. I could go beyond boundaries, too: these objects are utilities, these ones are for play, but here's a third category for objects that don't entirely fit into one or the other. I played around with this idea, first using the categories proscribed in the exercise, then making up my own, and then inviting another person to participate. This really drove the experience home. Adding another person showed that he might enter into the situation with an entirely different set of cognitive filters, informed by his past experiences and memories, and come up with categories I hadn't even thought of. And this was all from a single exercise!

Another key aspect of the book, for me, was RAW's use of Alfred Korzybski's General Semantics to point out the flaw in our notion of 'being.' That's a very heady way of saying that removing the word "is" from our language actually puts us more in synch with our experience of the world. RAW asks the reader to experiment with E-Prime, a version of the English language that excludes all versions of  "to be." In using this language, the thought "I am worthless" becomes "Today I exhibit what might commonly be referred to as feelings of worthlessness.” This of course forces the experiencer of the feelings to dig deeper. Instead of identifying and objectifying the self as a solid and static worthless being, might this curious observer instead dig deep and find the roots of these feelings? This new version of the though actually leaves the door open for change and transformation. And that, my friends, is magic.

Late in life, as I came to Buddhism, I'd notice a lot of themes from RAW's book come up in my exploration of mindfulness meditation. I began to see all of the various models we use to describe our experience as just that: models. I began to see that I have agency in choosing which model I might make use of. I can evaluate the models instead of identifying with them. I can notice thoughts, acknowledge them, and then let them go, really feeling the ephemerality and transience of these thoughts. The thoughts aren't me! The models aren't the world! There is something else, the actual naked experience of the present moment. I might only glimpse it every so often, but it's there beneath all my narratives, models, extrapolations, and editorializations.

The human mind is a story-telling machine. It's one of the beautiful aspects of being human. This is present in RAW's science-fiction work, which he uses artfully and with humor in an effort to underscore some of the very heady ideas mentioned above. How does a science – fiction author come up with a world from scratch and populate it with fantastical scenarios and characters? I'd say the same cognitive openness that RAW illustrates in Quantum Psychology, the openness that allowed me to begin to emerge from a deep depression, is the same mental flexibility that makes a fantastic science – fiction writer. RAW wrote about, demonstrated and in fact EMBODIED a form of mental syntax like E-Prime which puts one more in accord with things as they are, rather than a rigid thought grammar that solidifies and objectifies things as we wish them to be, or as we fear they are. The mind is a beautiful storyteller but the key is in noticing when we are mistaking the story for our experience. And knowing that we can use some gentle intention to change the story. RAW was a magician in that way, and his lessons of magic could transform the mundane into a gonzo conspiracy caper, or it could transform a person experiencing depression into an acolyte cognitive activist. I have incredible gratitude to the man for making quantum connections across disciplines. I am a changed person for it.
on November 19, 2013

And if it didn't you could be at risk of becoming a cosmic schmuck. :-)