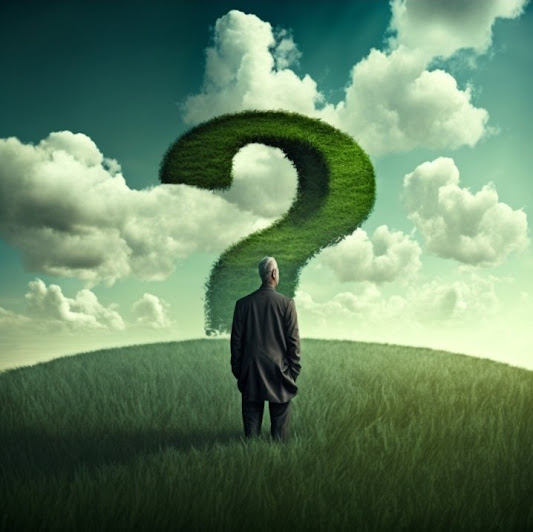 "Who is the master that makes the grass green?" Posted on Twitter by Dr Richard Waterloo. Source. Waterloo says it was created with MidJourney, an image generating prompt tool.

The essay that I had announced for this week, "The Compleat Skeptic," is a very short column published in New Libertarian, and is the first part of a three-part series of short columns, including "Skepticism and Solipsism" and "Neurological Relativism." Robert Anton Wilson concludes the first column by "hanging on" to an "ontological cliff" until the next column, but I think it might be easier on us to leave the cliff and consider all three columns together.

It seems to me that many of Robert Anton Wilson's ideas  are included in the three brief pieces.

I have been reading Rasa's RAW Memes book. Here is a section (from "Neurological Relativism") that I could see Rasa turning into a meme:

Wilson says (in the same piece) that under a system of neurological relativism, "one recognizes each belief system as a gamble, 'my latest best guess,' and does not confuse it with Truth, Reality, or any other variety of eternal verity."

A couple of paragraphs later, he lists some of his opinions, in libertarianism, the scientific method, in yoga, Space Migration, Life Extension and "dozens of other things" but says he can "suspend any of these beliefs at will, or all of them."

And doesn't his neurological relativism also fit with his libertarianism? At its heart, libertarianism is a philosophy of live and let live. Quoting Neuropolitics, written by Timothy Leary and himself, Wilson writes, "People are vegetarians or nudists or Communists or snake worshippers for the same reasons that other people are Catholics or Republicans or liberals or Nazis." If that's the case, wouldn't it follow that it's wrong for a government to impose one belief system on everyone else?

Here is one other Wilson quote, from "The Compleat Skeptic," but I have changed "in social life" to "on social media."

"I also maintain that people who are perpetually muddled, baffled, frustrated, angry, resentful and act as general nuisances and bring-downs on social media are that way, and cause themselves to continue being that way, only because they lack philosophical skepticism."

In the Neurological Relativism the example RAW gives of Godzilla getting interviewed by Baba Wawa (Barbara Walters, who just died) suggests Hermetic allusion.
"How do you and Mrs. Godzilla do it?" (italics in original). In the Book of Lies Crowley uses "it" as a tag for absolute reality. "Very carefully" seems good advice on multiple levels. 93 appears in the paragraph before. (p.124)

“Does this attitude explain why RAW's political views seemed to shift around over the years, as he adapted his opinions to new evidence?”
You might be very right here, Tom Jackson. We can indeed see changes in his stances over the years, and that was probably helped by his open-ended approach. So shifting political views appears an example of what Wilson calls here neurological relativism. In fact, that seems to be what he later came to name model agnosticism.

After accepting that different people have different reality-tunnels, the next step becomes to learn how to adopt different ones, and to juggle with those: “I can suspend any of these beliefs at will, or all of them, and look impassively into the Buddhist void, or switch around to other beliefs temporarily, to check out how the world looks to those who hold those beliefs.” (p. 126)
In later writings, RAW will come to call this habit navigating the ‘reality-labyrinth’.

In Stranger Than We Can Imagine, John Higgs writes that “a multiple-model agnostic would not say that all models are of equal value, because some models are more useful than others”, nor would they “concern themselves with infinite numbers of interpretations, as that would be impractical”.
This appears the way out of the conundrum of solipsism, and how to “deal with the outside world”.
Or, as the old advice given to acid beginners goes: “remember that cars are real.”

Although it is poetically called "the silk-lined womb of solipsism" on p. 121, the description of what happened to Crowley despite (or rather because?) of his magickal training seems an apt example of going through Chapel Perilous, the main danger of multiple-model agnosticism.
As Tom says, we find in a very condensed form many of RAW's ideas in these few pages.

Folks clinging for dear life to truth these days love relying on the kinds of quips made RAW’s NL-critic, rather than getting down into the weeds of nuanced debate: “Skepticism is a lovely game, after all, only so long as we ignore it long enough to deal with the outside world.”

Each of the three NL essays references Discordianism. Does anyone know whether this was RAW’s most explicitly Discordian phase? I’m trying to pull together other RAW writings that mention Discordianism.

Glad you pulled this trio together for a single week’s reading, Tom. They’re much more less potent in isolation. There seems
To be a definite progression in his argument, with Neurological Relativism as a real crescendo. The term “NR”, by the way, seems like a great descriptor for a lay audience, as opposed to some of the more esoteric labels getting at the same thing (Maybe Logic, model agnosicism, Discordianism, etc).