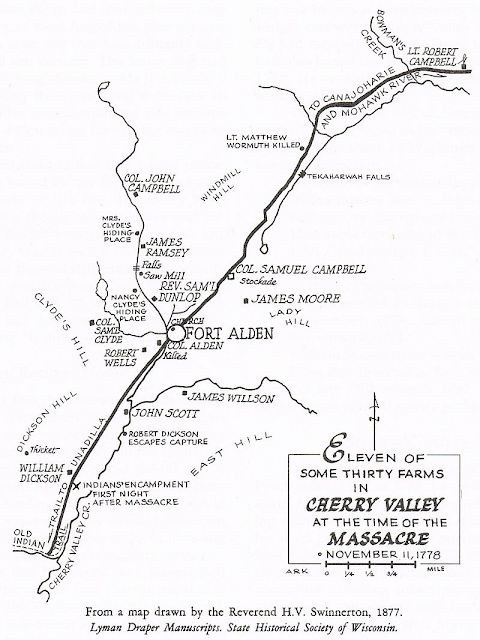 This chapter sees the climax of Sigismundo’s character arc in Nature’s God but before we get to that we’ve got to wade through the gore and confusion that was Cherry Valley.

Cherry Valley should stand, not as a memorial to patriotism, but rather as a reminder of mankind’s inhumanity towards man. Because this chapter deals so much with Miskasquamish, RAW’s main American Indian character, it is worth noting that historians are conflicted on how much the loyalists had to do with the civilian massacre at Cherry Valley on November 11, 1778.

The troop that attacked Cherry Valley consisted of loyalists, British soldiers, members of the Seneca, and Mohawk tribes of the Iroquois Nation under the command of loyalist Walter Butler. According to Butler he had little to no control over the indigenous people who were with his group. Historians seem to agree that it was the Seneca members of the raiding party who turned on the civilians. The Seneca’s anger was caused by the destruction and burning of their settlements by American settlers...an eye for an eye. Butler’s command was undermined by conflicts with Joseph Brant, leader of the Mohawk tribesmen. The division between these two leaders allowed for the massacre of 30 civilians, along with 14 soldiers, and Colonel Alden, the American commander of Cherry Valley. Curiously, one survivor of Cherry Valley, a Lieutenant Colonel Stacy says that he was about to be killed but appealed to Brant, indicating that he was a freemason, and Brant had his life spared. Brant would also capture 70 people from the survivors of the initial attack.

The Colonial forces had been warned up to three days before the raid by Oneida allies; however, the commanding officer Colonel Ichabod Alden didn’t take the reports seriously, keeping his command outside of the central fort. That is probably why his name is on the list of casualties of the initial raid. Indeed, the British and Indigenous forces didn’t have the firepower to breach the fort but swept around it, attacking the nearby settlements.

Cherry Valley did more than drive Colonel Muadhen, who thought he’d seen it all, into Bible-babbling catatonia. The colonists were horrified at the massacre and General Washington commissioned the Sullivan Expedition that spent the next year trying to drive the Iroquois completely out of New York. Eighty villages were attacked and razed over the next year by Colonial forces as a part of the Frontier War that raged along the Revolution. An eye for an eye. Funny how we’re not even good, as a species really, at proportionate response and some still believe in that dreadful equation.

Sigismundo, a colonist of the Northwest Territory, is having his own conflict with a native resident. Miskasquamish has pushed Sigismundo towards something of a breaking point; it is appropriate that during their tense conversations they sit by sulphurous water. Alchemically, sulphur represents the “heating” of the work...the rising action. Sulphur is also used in Afro-American Hoodoo to cross, jinx, or banish enemies and obstacles. “I hope you know...this means war.”

Their conversation also seems to play with European/Indigenous relations as well. Sigismundo tells Miskasquamish the story of Christ without identifying him and in the terms of Miskasquamish’s cosmology. Contrast this to the historical missionary efforts to forcefully convert the American Indians and erase their cultural understanding of the universe. Sigismundo also insists that he has the right to live in Ohio because he took the time to build his house there and hasn’t acted aggressively to his new neighbors. Right now, there is a small movement to rename the capital Columbus to something more suitable, like Flavortown. Many Ohioans and the folks in the peanut gallery are upset by this “erasure of history.” I wonder how many of them know where place names like Chillicothe, Cuyahoga, or Ohio came from and what they mean. We are left with the question, to whom does the land belong?

If we consider Wilson’s The Trick Top Hat, which to me seems to be a pretty earnest depiction of his version of a utopian United States, Miskasquamish is probably going to be disappointed in his property dispute. Neighborhoods in The Trick Top Hat are regulated thusly: if a neighbor annoys you by living eccentrically, loudly, outside the Homeowners Associations rules, etc. you may lodge a complaint. Government officials will try to talk with the neighbor, see if they can find them a more appropriate neighborhood- usually to one of the LaGrange floating cities where eccentrics are flocking during the novel. However, if the neighbor chooses to remain and they’re not directly affecting the rest of the neighborhood, there’s fuck all anyone can do about it. So, while Miskasquamish is worried about the moral depreciation of his neighborhood with a Reverser present, well...let’s just say “there goes the neighborhood.”

Miskasquamish’s confusion upon seeing the gun makes sense only at the end of this chapter. His naivety is almost offensive during the sequence as surely a man who had travelled so far during the pre-Revolutionary period and Revolution would have encountered firearms. Sigismundo’s display of the weapon also parallels the ultimate outcome of many colonial-native relationships and the Cherry Valley massacre. Sigismundo’s display of superior technology is troublesome to this reader and reflects the history of the Americas all too well. That said, RAW gives Sigismundo a moral “out” by having Miskasquamish note he never directly threatened his body with the gun...if that is much of an out. Miskasquamish takes this away from Sigismundo’s stories about the Builders and his interactions with the Neapolitan; all the Europeans are mad. Considering history, I’m not sure is Miskasquamish is truly “paranoid.”

Parallel to Seamus’ sickness as witnessing the maraschino-hued carnage of Cherry Valley runs the miraculous recovery of Paddy the Dog back on the Babcock Estates. Considering how Seamus saw himself through the eyes of the English, it is darkly appropriate that there is now a character dubbed “Paddy the Dog” trotting around his old stomping groups. Little Ursula has inherited her mother’s gift and while we see no evidence in the first part of the chapter, her nigh-resurrection of Paddy, who might also be a reference to Joyce’s departed Paddy Dignam, might have a sympathetic effect on Muadhen across the pond.

Miskasquamish returns to Sigismundo dressed as a woman; a reference to some native Tribe’s gender nonconformity and reminiscent of the gender swapping tradition found in shamanic traditions such as the Nat Pwe of Thailand. After appearing to Sigismundo, who asks no questions, they proceed to smoke and travel to strange new worlds.

From Eric: “Some witch music for this chapter. https://youtu.be/Nz5DLO8fclA ”

Good post. Our world could use Maria’s healings hands today.

Chapter nine has the title “Cherry Valley”. You put the chapter ten title.

Another excellent history lesson previously unknown to me, thank-you!

Three of our four protagonists access the non-local circuit, as Joyce called it, differently in this chapter. Muadhen from the shock and trauma of seeing the slaughter; Maria from invoking Lady Greensleeves through ritual; Sigismundo from ingesting psychotropic herbs.

We find ourselves at Chapter 9 = Yesod = the Moon, in this instance its lunatic aspect exemplified by the civilian slaughter. Muadhen (Moon) witnesses the immediate aftermath of the carnage and it temporarily drives him to lunacy or to what Pink Floyd called The Dark Side of the Moon.

Recall in Chapter 7 the prediction: "By 2020, autokinotons may even fly to the moon." This year seems to have more than usual lunacy. Autokinotons in this context suggests mechanical, robotic WoMan.

At the end of the last chapter we found a riff on the number 13. The first two sentences from RAW's Prologue to Cosmic Trigger I : "As the late, great H.P. Lovecraft might begin this narrative: It is now nearly 13 years since the ill-fated day when I first began investigating the terrible legends surrounding the enigmatic Bavarian Illuminati, an alleged conspiracy that some people believes rules the world. Like a Lovecraft hero, I embarked on my research with no suspicion of the perils awaiting me: I thought I was investigating notable cases of political paranoia and expected only to find insight into the psychology which causes otherwise sane individuals to subscribe to such absurdly ridiculous conspiracy theories."

The other day one of my clients, an otherwise sane individual, told me (via Q Anon) that Hilary's missing emails had been found which would prove that Russian collusion in the 2016 election was all a hoax. And furthermore, they implicate her in the child sex ring that operated out of a D.C pizzeria. Apparently, a rich pervert would go in and "order a pizza" but give the cashier $450,000 for what they really wanted. I'm not making this up. The conversation then shifted to how ridiculous the flat earth conspiracy is because of photos from
space showing it otherwise and besides, you have the testimony of astronauts. Good to know they draw the line somewhere.

Finally got a chance to finish this chapter, some interesting twists at the end of it.

I mentioned the lunacy side of the moon in my previous comment.
p. 180: "'Here I am again' he said aloud. 'Two lunatics for company and not entirely sure of my own sanity.'" I'm told a lunar eclipse will happen today, Saturday. Yesterday, I saw a fellow wearing a newly minted Pink Floyd, Dark Side of the Moon t-shirt.

p. 165: At the bottom of the page Maria shows her daughter how to pronounce veterinarian. We find five, one sentence or one word paragraphs beginning with the letter V there. V.V.V.V.V shows another motto/mask/identity of Aleister Crowley. I don't recall offhand what those initials represent, but do know he connected it with the Abyss in Chapter 42 from The Book of Lies. I sent the passage I'm about to quote to RAW a few months before his transition because it seemed one accurate indicator of his life work. Folks from the MLA Forum were asked to send him jokes at that time. I sent the quote along with a joke about Sirius.
"Now and again Travellers cross the desert; they come from the Great Sea, and to the Great Sea they will go.
As they go they spill water; one day they will irrigate
the desert, till it flower.
See! five footprints of a Camel! V.V.V.V.V."