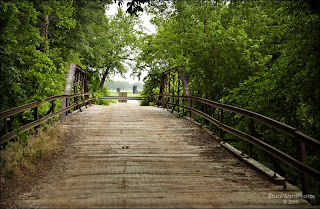 Judging from Robert Anton Wilson's introductory remarks to his article "The Motherfucker Mystique," the original manuscript of his book Playboy's Book of Forbidden Words would appear to be the great lost RAW work that none of us have ever read, or are ever likely to read.

If the corrected excerpt here is any way to judge, it would have been an interesting book. Given Wilson's apparently inability to preserve his literary papers, and his frequent moves, it seems unlikely that there is a manuscript anywhere that would allow the original book to be published.

I'll let someone who knows more about werewolves than I do analyze Wilson's poem. I've put a photo of Werewolf Bridge, near Chanute, Kansas, at the top of this blog post, taken from this photo gallery.

Forbidden Words was the first Wilson book I read (I'd been reading him in The Realist for years), and I liked it. Of course, I have no idea what was cut from it.

I wonder if the Japanese have an equivalent of mother fucker. 20 years ago i heard stories that Japan had more cases of mother son incest than father daughter. This alleged disparity was supposedly related to the 'work widow' syndrome where japanese men were absent from the family home due to their corporate devotion.

I bought a second hand copy of Forbidden Words on www.abebooks.com recently. I am finding it interesting even if RAW considered it one of his least favourite works, what with all the cuts etc.

@supergee, So you were reading RAW for years before Illuminatus! came out? What did you make of him, and where you surprised when "The Eye in the Pyramid" came out?

I'd like to read his Forbidden Words, but part of me feels guilty about that since he seemed to regret the final product so much. There are no verbal taboos in my house (except when "others" are around... like grandparents), but I don't know if I use "motherfucker" specifically all that much. I do use many a variant of "fuck" though. I'll ask the kids and see if there's any variant that comes out more often.

We went through a phase back when the kids were little of trying to use "swear alternates." It didn't last long. It was a fun mental exercise but ultimately I decided it was fucking stupid.

Just going off of a loose memory, is that the bridge RAW used hide and spook his kids when they came home from school? Or was that somewhere else? Don't remember if I read that or heard it in an interview either.

"Werewolf Bridge" brings to mind Bob Wilson's love of Universal horror films with its reference to Count Dracula, etc. I remember when I attended Bob's Conspiracy Game in 1989 (?) a character named Van Helsing played a major role. I also remember an interview where Bob kept saying "Give me my tanka leaves!" referring to the old Mummy movies.

I had to look up the identity of Mehmet Ali Agca who tried to kill Pope John Paul II. The poem has a nice Crowley-esque ending.

I started reading The Realist in the early 60s, and by the mid-60s I had decided Wilson was one of its most interesting writers. I read Forbidden Words and Book of the Breast and even found a copy of The Sex Magicians in 1974. The Realist had announced that Illuminatus! was forthcoming, so I was not too surprised when it showed up in the Science Fiction Shop.


I compared the two versions of Motherfucker, and they're pretty similar. Playboy toned down "hard as a fundamentalist's skull" to "hard as nails," left out the part about "old motherfucker," and gave more detail about incest patterns.

Link to last week's discussion: Under BASKET, Wilson notes that the gay writer Randy Wicker did a column called "Wicker Basket." He wrote about Wicker, the gay editor of a girlie magazine in his "A. Nonymous Hack" article in The Realist. When he told the story again in Book of the Breast, I realized that he was A. Nonymous Hack, which like learning some livejournal aliases, meant that there was one fewer interesting perosn in the world.

It sounds like RAW may be exaggerating a bit about the changes in FORBIDDEN WORDS, which is good news -- we can hunt up a copy and read it.

I first read PBOFW when it worked as the page for the reference desk in a public library: they had an original hdbk copy in the "can't check out" REF section. I sat and read it piecemeal in down time. Then I found another library that had a circulating copy, so I read it again then. Then I found a cheapie ppbk version for a couple bucks on eBay or half.com and have delved into it many times.

In the mid-late 1990s RAW told interviewers he was planning to re-write PBOFW as RAW's Black Magick and Curses, and D. Scott Appel was supposed to co-write, but Appel wasn't up to it, for financial reasons (we found out later).

There are shards of articles that make up what might be considered the abandoned attempt to get that Black Magick and Curses Book out.

Ever since I read what RAW says about Playboy editors and "the Sabine women" I've considered any subsequent piece that touched on language and taboo and magick and the semantic unconscious as possible fugitive pieces for what might have made up Robert Anton Wilson's Book of Black Magick and Curses.

In that same ish of Thresher RAW appears among fellow contributors: Jay Kinney (their relationship appeared strained?); RU Sirius, John Shirley, and two writers I consider totally fascinating from the Marginals Milieu: JIm Goad, who published the First Amendment-testing Answer Me! and a wonderful book titled The Redneck Manifesto. (Wherever he is now, I hope he's okay!), and John Zerzan, who the FBI suspected - with damned good reason - as the Unabomber. After Kaczynski was nabbed and forced to plead nuts, Zerzan and Ted had a lively correspondence. Zerzan admires Ted. Nothing has done more to sell Zerzan's books than the media noticing he's a friend of the Unabomber.

"Werewolf Bridge" seems an excellent example of poetically conveying an awe-full lot without many words. This follows the essay on the Wake which communicated a whole labyrinth as well as a methodology for navigating it using many words.

A werewolf represents a man consciously aware of his incredibly strong animal nature. This man knows his animal will go out of control in the light of the full moon so he does what he can to control and prevent it. A solution to taming and harnessing the power of the animal ends Wilson's poem. This ending also strongly recalls the Strength card from the Thoth tarot.

Your average person who goes through life never knows the struggle a werewolf goes through under a full moon unlike shaman, mystics, magicians, musicians etc who have stirred the heights and depths of their inner life and thus know their Shadow and the Beast within. A werewolf bridge might be the link from the person just starting out to the vision at then end of this poem.

The more I read it, the more profound it seems. It looks at the collective Shadow of humanity and possibly juxtaposes it against the individual werewolf shaman or vice versa. Starting from:
"Every twilight as the shadows fall, I ask: ..."

Also love the lines:
"Until defiance builds of it's own ruin
A truth more brave than the truth of death."

I might've added D. Scott Appel's "Fire You", from Chaos and Beyond, pp.151-153 as something that might have informed the Black Magick and Curses books.

From the Lon Chaney Werewolf films:

Every man who is pure of heart

And says his prayers by night

Can become a wolf when the wolfbane blooms

And the moon is full and bright.
---------
The werewolf can't help himself when he hurts someone else. The poet's half-century of sometime "rage" or "laughter and scorn", etc: he's caught in a gnostic Time, seemingly only redeemable by the love of Woman. The poem (maybe RAW's best?) somehow manages to combine gnostic ideas with something tantric influenced by John Donne and Ez Pound.

Furthermore, the advent of Freud and the idea that we have far, far less control over our actions than we'd thought: the unconscious seems to have too much sway over our cherished ideas about Self. And yet he'll still rage against "werewolf God and werewolf Man."

Which reminds me of Orson Welles at the end of F For Fake:

I'd like to see the Book of Forbidden Words entry for 'Cunt' which is probably the only word that still has the power to jar your average everyday English speaking person. I find it interesting that American usage of the epithet is usually reserved for demeaning women where in England it's usually aimed at men and in Australa it can even be used an endearment. Considering Bob's research and writing on feminism and on goddess religions it would be fascinating to see what he wrote about this word.