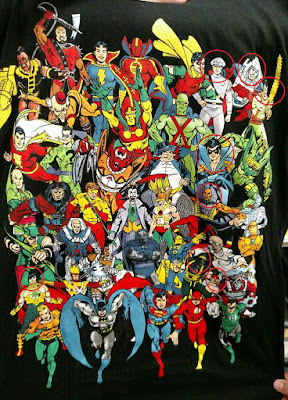 On Monday, November 23, 2020, birthday of both Harpo Marx and Boris Karloff, I went to the emergency room. I had had sharp pains in my lower left signs two days before and again that morning. I suspected I that had had an attack of diverticulitis. I had one once before over ten years ago. (Bobby Campbell told me at the time that Bucky Fuller also suffered from diverticulitis.) On my way to the hospital listening to Elliott Carter (my favorite music for the chaos of 2020), it struck me that this might prove a good chance to try an exercise from Prometheus Rising. I would view this visit to the ER as a party, and I would imagine myself as handsome, irresistible, and witty. I figured this would at least get some endorphins flowing to help with my healing. I did in fact talk with more people in person that day than I had since the pandemic shut-down started in March.

I had on a t-shirt with a bunch of DC characters on it. While in the waiting room the security guard commented on my cool t-shirt. I mentioned that my wife had gotten it for me at Target and that it came from a 1980’s TV show. An older couple came over to take a look at the t-shirt (maintaining social distance, of course). They also liked the shirt. The man, leaning over his walker, said, “Yup, that’s from the 80’s. I’m an expert on cartoons from the 50’s and 60’s.” I had only ever gotten one comment on the shirt before (from a security guard at Walmart – I haven’t talked with many people this year). I don’t know if this interest in the shirt came from my metaprogramming exercise, but I’ve never talked so much with strangers at the emergency room (and I have spent a lot of time in ER’s with my family).

All the best to you Eric !

After something like a month and a half, still no luck finding coins...
It is getting to the point where my Prover is starting to find all types of reasons as to why that is. "The vast majority of people in here do not use cash anymore" is the main one at the moment. It is kind of true, there's so much contactless card payments nowadays that even though I work in a cafe/bar, we don't get tips in the tip jar more than once a week or so.
Still, if nothing else, I now think about checking the ground almost every time as soon as I set a foot outside. That sure is a cognitive improvement.

I was last night watching Jim Henson (the man behind the Muppet Show) 1969 TV play The Cube. It is about a man trapped in, you guessed it, a cube. Somehow more existential than Natali's 1997 Cube, this one "dramatizes the complex, baffling problem of reality versus illusion." ( https://nofilmschool.com/2017/03/watch-the-cube-jim-henson-trippy-existential-short-film )
I find it somehow relevant to mention it here as it touches on a fair amount of subjects that should appeal to RAW fans, there is even mention of quantum physics. This hour long film being from the 60s, I assume that what is being discussed was pretty far fetched for the people outside the scientific community.
A big recommendation, even though I am not sure how easily one might be able to get their hands on it...

I am very happy to hear that you are okay Eric. I hope the pain subsides quickly and completely. I am impressed by your ability to turn something that would usually cause anxiety into a fun experiment...that's high magic to me. Sounds like you brightened a few other people's nights as well!

Nice post, Eric. I had diverticulitis once. Ever since, I've taken fiber, and never a problem again. Hope you heal well!

There is certainly something to be said for RAW's optimism and general hilaritas.

Great story! Illustrative of using/transforming stress to an advantage and having the presence of mind to not allow C1 and C2 to dominate. Illustrative of real, extemporaneous and improvised magick; the use of music to alter the mood of the situation and, of course, the exercise. Note the coincidence of wearing the DC superheroes t-shirt and encountering an expert in the area at a hospital of all places. Glad to hear everything ended well. Very cool to hear about this practical use of the exercise and how it made a real difference.

Thanks everybody. Only four days until the Beethoven sesquicentennial.