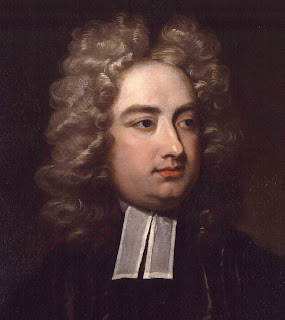 This week, please read part six, "The Hanged Man," from the quotation from William Blake's "Milton," ("I will not cease from Mental Fight," page 247, to page 264, "Someday. Somehow."

This was one of my favorite chapters, tying together Robert Anton Wilson's interest in personal liberty with his interest in Irish literature. Sir Edward Babcock explains that Jonathan Swift served "intellectual liberty" and "not just political liberty" (page 251) and the rest of the chapter illustrates how personal liberty is important, and not just the liberty to debate "political issues." The chapter is about sexual repression, although Wilson was interested in other personal freedoms such as  freedom to read or freedom to control what foods and drugs you choose to put into your body.

I liked the references to the works of James Joyce on pages 249-250 and the discussion of Jonathan Swift. I probably haven't read enough Swift, as I haven't gotten much further than Gulliver's Travels and "A Modest Proposal."

Years ago, I belonged to a book discussion group in Lawton, Oklahoma, and we would take turns suggesting works to read. I once suggested reading Gulliver's Travels and the others agreed, although when we had the meeting, I was mortified to find out that almost nobody in the book club had bothered to read it.

The capacity to feel a "fierce indignation" and to want to write about it is a characteristic of many investigative reporters.

The William Blake verse excerpted at the beginning of the chapter is from a poem often known as "Jerusalem" and also known as "And did those feet in ancient time." It was set to music and apparently is a popular patriotic song in Britain; many Americans who are my age likely would know it from the cover version by Emerson, Lake and Palmer on Brain Salad Surgery, an album that was popular among my friends when I was in high school. It would also be difficult for even an American to miss the connection to the movie Chariots of Fire. The Blake poem also is referenced in Alan Moore's novel Jerusalem. William Blake is a great favorite of many RAW fans, although I confess that when I studied the English Romantics in my English lit survey course, I wound up going all in for Percy Bysshe Shelley. (Perhaps you should be able to tell something about a reader by asking him/her/they to name a favorite Romantic poet, just as supposedly you can tell about a person by asking which Beatle is the person's favorite. I'm not sure how the latter would work for me, as George originally was my favorite, then John, and finally Paul.)

The section of the chapter in which John Babcock is considering his options -- whether to confess or keep silent, and how that decision will affect both him and Geoffrey Wildeblood -- sounds a lot like the "Prisoner's Dilemma," perhaps reflecting RAW's interest in game theory.  Prisoner's Dilemma also is a novel by one of my favorite writers, Richard Powers.
on May 20, 2019

Since I'm one of those RAW fans who like William Blake and Alan Moore I guess I should acknowledge how it is always thrilling to see any part of the Preface to Milton. I sing it to myself all the time and it was part of my first ritual when I was a kid.

I also really love the Babcocks who might be my favorite conglomerate of Wilson's creations. Sir John's ruminations on Wildeblood- "John fell in love. The boy was the other heretic in geomertry class, Geoffrey Wildeblood, who believed there was a perfect chicken coop in the mind of God."- are beautiful.

I haven't read anymore Swift than that either Tom- but I do love Gulliver's Travels. I want to live with the Houyhnhnms.

And that's funny in regards to the Beatles Tom- my rotation has been John, George, and now Paul. I hold Ringo in his own holy regard.

ELP's "Brain Salad Surgery" was popular with my high school crowd too. I didn't know they did a Wiliam Blake cover until now.

Yet another tragic death in this week's reading. Why all this tragedy, I thought? Then I remembered Nietzsche's "The Birth of Tragedy" where he convincingly argues for the importance of tragedy in art and criticizes Ancient Greek playwrights for diminishing the tragic element in their theater. For instance, the last sentence in chapter 20 from BoT reads: "Dare now to be tragic men, for ye shall be redeemed."

I also see a symbolic, non-tragic aspect to Wildeblood's death. Before that though, Wildeblood recalls Oscar Wilde who also experienced tragedy due to his homosexual preferences. Symbolically, it tells another story. Wildeblood believes in Plato while his lover Babcock looks forward to a better Philosophy or Logic to come. This comes to light when Drake, their teacher ridicules Plato's Ideal Forms then asks Babcock what he thinks about that.

As mentioned earlier, Nietzsche expressed a project to overturn Platonism. Plato's philosophy plays a significant role underlying many basic assumptions of how we see the world. Korzybski's famous maxim, "the map is not the territory" rebels against Plato's system of representation based on Ideal Forms. As I see it, the death of Wildeblood while Babcock gets away with their common sin, symbolizes the overturning of Platonism by the desire for a better philosophy to come. Deleuze in "Difference and Repetition" argues that Plato incorporated elements in his own philosophy that could be used to overturn it. Wildeblood's death by suicide, by his own hand as it were, could symbolize that.

Once again a passage in TEWS reflects current political events. p. 252: "John, by then in his teens, began to hear about those passages in Coke that said parliament, just like the king, could not do anything it pleased but must obey the constitution." Rep. Jerry Nadler accused Trump of behaving like a king last week and declared a constitutional crisis. I hear a lot of lip service in that regard. Maybe this is what it feels like when the Earth is shaking?

Man, I lovd ELP in high school. I also knew "Jerusalem" from a Monty Python sketch.

Keats is excellent Eric- he's my favorite of the late Romantics- or at least the main ones. I like John Clare the most. The old head of the English Department in undergrad and I used to get into arguments about whether Endymion and Hyperion were accomplished works compared to his later Odes. (I was one the side that they were.)

Suzi Pinns version of "Jerusalem" is really good, it's the one used in Jarman's magnificent Jubilee, and I have a soft spot for the Pet Shop Boys Remix as well.

Tom do you remember who the Hanged Man is in this illustration? I remember you and I either thinking it was supposed to be Geoffrey instead of Antonio or vice versa and Bobby having to correct us. Or was it Babcock himself? You really should see my hallway where I have most of the prints he gave me hung up- the Hanged Man is there.

I don't know what character the Hanged Man in the illustration represents, Rarebit, but symbolically it surely connects with Geoffrey Wildeblood's suicide in a pond. Hanged Man = Mem = the element Water. The Hanged Man also represents esoteric suicide, a death/rebirth type of ritual where the aspirant intentionally dies to some aspect they want to change. RAW came up with a formula of this nature in "Cosmic Trigger I." In "The Game of Life" Leary assigns The Hanged Man to the first stage in the Higher circuits, stage 13 the input side of C5 as if one must die to the dominance of the 4 terrestrial circuits, the ordinary personality, ego and mind, to reach the more interesting neurocircuits.

Knowing how to call forth the element Water through visualization, invocation, sympathetic resonance, etc becomes an invaluable tool for the working mystic. Crowley talks about going through an ordeal of fire in The Book of the Law. Crossing the Abyss, the second ordeal in his sytem, gets symbolically illustrated as crossing a desert. The path of Gimel crosses the Abyss connecting Tiphareth with Kether. Gimel = camel, a beast noted for its ability to internally store water on desert journeys. Wildeblood = wild blood suggesting kundalini out of control.

Babcock, reacting to the death of his friend and lover, goes through absurd iterations of Plato's Ideal Forms in memory of Geoffrey's philosophical beliefs.

p. 263: "And the hangmen are all perfect there; when they flay a whore, they use perfect whips."

The first phrase with "hangmen" in it adds to 106 via the intials of each word. 106 = Fish; the letter Nun, and Attained. Nun = Death. The Hanged Man = a man reversed. The next two phrases in the quote communicate something interesting and practical for alchemical work when added.

Pg. 249 - Bob used to live in Howth. Howth Castle left its door open at dinner due to a deal with the pirate Grace O'Malley in the 17th century. Joyce uses this in the Wake.