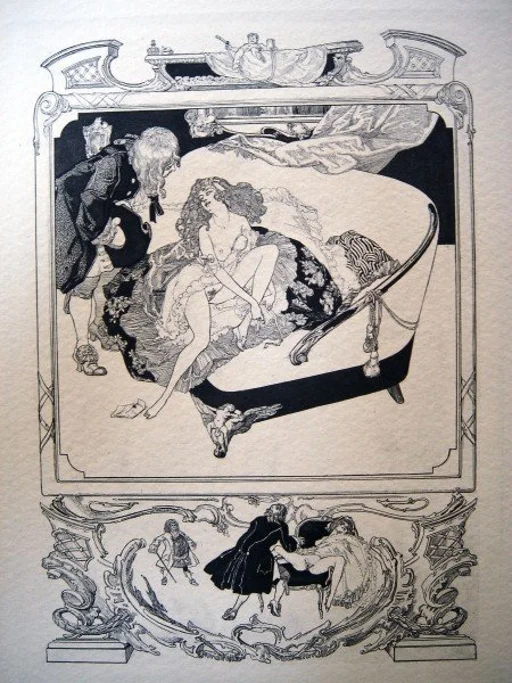 From Fanny Hill; or, The Memoirs of a Woman of Pleasure (illustrated by Franz von Bayros)

Like the end of the separate Parts of The Earth Will Shake and The Widow’s Son, Book One of Nature’s God closes with a panorama of the historical events that surround our four protagonists. This gives the book an epic scope and allows RAW to make his riff/commentary on history and progress. I doubt that I need to point this out to any of us but this chapter is of course written somewhat in the style of “The Wandering Rocks” from Joyce’s Ulysses. (I say somewhat as, despite the headlines, Wilson doesn’t really ape newspaper writing and instead writes in his regular, suggestive style.)

Maria’s rather innocuous letter to London Gazette and the actions of Weskit Fitzloosely, while fictional, reflects the complicated history of the press in England. It was often the actions of drunks and pornographers that pushed the borders of decency and championed true freedom of the press. For example; The Yellow Book was the most popular periodical in 1890s London, it published the artwork of Aubrey Beardsley and John Singer Sargent, contributors included Ernest Dowson, W.B. Yeats, Max Beerbohm, and Baron Corvo. Yet, when Oscar Wilde was brought to trial he carried a yellow bound book with him- most likely a copy of Huysmans or Pierre Louys, and although Wilde had never contributed to The Yellow Book, because Beardsley’s (who detested and even feared Wilde personally) sumptuous illustrations had graced both Wilde’s Salome and The Yellow Book the periodical was inextricably linked to deviance, buggery, and indecency. A valuable publication was snuffed out. Luckily Arthur Symons is in the corner, rubbing the shoulders of his prize-fighting pornographer Leornard Smithers who fearlessly puts out The Savoy. Smither’s provides work to the members of the Decadence Movement when other publishers fear Victorian prudishness and public opinion and The Savoy remains to this day a jewel case of gemlike parts of English prose and art. A more contemporaneous example, in relation to Maria’s publication, would be the downright humorous publication of John Cleland’s Fanny Hill; or, The Memoirs of a Woman of Pleasure. Cleland wrote his pornographic masterpiece while in debtors prison and promptly found himself back before a judge after the initial publication of his manuscript. There Cleland whittled and wailed his way out of a conviction and according to one biographer was rewarded a pension by the court to prevent further writing. Meanwhile, Fanny Hill went merrily along being published by the pirate press by the boatload- no one really knew what to do about it.

Maria, under her borrowed-from-Jonathan-Swift nom de plume of Beckersniff, ironically asks if anyone more civilized than “the Methodists, the Howlers, and the Ranters” believe in God as a physical being versus a spiritual concept. I say ironic since it was the Protestant dissenters who really began the underground printing tradition in England. Going back to Tyndale’s Bible in the early sixteenth century and continuing to John Bunyan’s writings (written while imprisoned for his preaching more often than not) in the late seventeenth century and beyond to Blake in the eighteenth, Protestant religious nutters have had a lot to do with freedom of the press. This is something I’m sure most of today’s fundamentalists would regret if any of them were literate or capable of having even the most rudimentary grasp of history/reality. Oh well- ignorance and dragging the world back to the Dark Ages are bliss, as they say.

We are told that, like Fanny Hill, Maria’s “little volume” proliferated in pirate editions and that seven copies remain in libraries around the world today. Two of the libraries are interesting: one is the collection of Gershon Legman. Legman was a folklorist who specialized in erotica and wrote The Rationale of the Dirty Joke, a book the author of Playboy’s Book of Forbidden Words would surely have appreciated. The second library is of course Miskatonic University. The subject matter of A Moistness in the Wind, as I mentioned before, harkens back to Wilson’s first published essay in Krassner’s The Realist. The material in the excerpts seems to be an anachronistic rewrite of the original essay with some of Hargrave Jennings material thrown in for extra flavor. (In the spirit of Wilkes I will relate that my wife pointed out a few evenings ago that there seems to be no purer happiness than that of a man who is having his penis touched. I couldn’t argue in most circumstances, but she’s never had to endure that supremely awkward part of a physical.)

Hilary Mantel’s Cromwell trilogy deals in part with the challenges of publishing an English Bible at the time of Henry VIII.

p.83 - Quoting religious scholars on the inferiority of women, probably accurate quotes, illustrates the extreme imbalance of male and female energies in Christianity, the dominant Western organized religion. RAW puts this theme in a new context symbolically present and recurring since the beginning of the book.

p.84 - In the spirit of Nietzsche and Crowley, a subtle yet profound attack on institutional Christianity: "The person who had called her 'the worst heretic since Simon Magus himself' was quite simply correct. Her ideas were completely un-Christian in any historical objective reckoning of what Christianity meant"

The "her" in the first sentence refers to Maria Babcock getting attacked for the book she wrote. The "Her" that begins the second sentence seems a pun referring to both Maria and the Goddess archetype. Of course, Maria's name connects with the Goddess energies that did make it in to Christianity in the worship of Mary, the Mother of God.

The headline that introduces Maria's book, A Moistness in the Wind reads:
"And She Was The Mother Of Isaac
No Doubt"
This refers to the biblical Sarah and the pseudonym she uses, Sarah Beckersniff.
The initials of the first line, A + S + W + T + M + O + I = 196
196 = Mare Soph, a phrase found in The Aenead by Virgil that appears part of a sentence translated as: "calm winds allow the sea to rest." The commentary on this reads: "The winds are said to do that which by absenting themselves they allow to be done"; 196 has other related correspondences and it = 14 x 14. We recently encountered the number 14 on page 78 with Sigismundo in the woods, there seems a possible connection there.
The second line of the headline, "No Doubt"; N + D = 54 = Thelema = Will.

The title A Moistness in the Wind suggests a slight bit of feminine receptivity symbolized by Water into the prevailing intellectual ideology symbolized by Air.

This title almost seems a reversed image of Crowley's Clouds without Water which plays a part in Masks of the Illuminati, an earlier novel by RAW featuring a different John Babcock as a protagonist; different because in a different era more than a century apart; no idea if the two Babcocks are related though it would make sense if the latter John Babcock came from progeny of John and Maria.

The caps of the title = A + M + W = 47. The title of Chapter 47 in The Book of Lies = Windmill Words. Though the titles have an obvious correspondence with wind, the subject matter of Windmill Words has nothing to do with the feminism of A Moistness in the Wind. Rather, it appears a concise sketch of the 8 limbs of yoga and seems much more relevant to Sigismundo's magical retirement.

p.87 - In the next section after the book's announcement we find out one of the 7 remaining copies ended up at Miskatonic University in Arkham. M + U + A also = 47. Windmill words seems not a bad way to characterize both a University and H.P. Lovecraft's writing career from whence came M.U.

I'm amazed by the thoroughness of Gregory's research. I had no idea, for example, who Gershon Legman was.

The Mormons believe that God is married to a Mrs. God and they live on a planet together, so I have to assume they believe God really is male.

@Eric- I still need to read those books.

@Oz- Yeah, I imagine the quotes are historically accurate. I'm decently sure that Sir John in "Masks" is a direct descendant of Sir John in "Historical." I forget where but I believe there is a reference to this in the novels. I'll try to find it. Great catch with "Clouds Without Water." I have a tiny Yogi Press edition of that and "Konx Om Pax."

@Tom- Legman sounds great and I'm going to have to get a copy of his book. Folklore is a delightfully crass field of study- one of the "dirtiest" books I've ever read was a mid-century collection of Ozark folklore.

I've always been partial to the more obvious symbolism of Shaivism. Lucy was playing with one of my Shiva Linghams yesterday and asked me what it was. I had to practice a lot of discretion to not just explain it to her and instead teach her about Shiva. She knows Brahma, Kali, and Ganesha but I think yesterday was the first time I really got to explain the Trimurti to her.