Many of you would enjoy Znore''s book 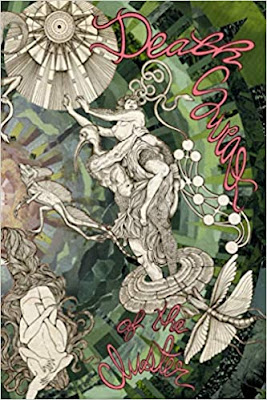 While 2020 has been a bad year in many ways, at least we got something to read. Hilaritas Press issued definitive new editions of Ishtar Rising and The New Inquisition and put out a totally new title, The Starseed Signals.

Groupname for Grapejuice has a particular focus on James Joyce, but Znore's work discusses Robert Anton Wilson, Philip K. Dick, Ezra Pound and William Blake, among many others. The first essay begins with Znore walking into a used bookstore in 2008 and finding a copy of Cosmic Trigger on the shelf. I'm about 70 pages into the book so far and I've come across many references to RAW.  And the series of essays in the book about Dick's final novels should not be missed by Dick fans

One reason to buy the book as opposed to simply reading the blog (aside from the logical organization Znore gives to his collection) is the introduction, which amounts to a defense of taking literature seriously and also provides a map for what Znore is trying to do. (In a personal literary synchronicity for me, he writes that "in the widest and roughest of terms, the tradition could be called 'Platonic'." Before starting Znore's book, I just finished Richard Powers' Plowing the Dark, which explicitly references Plato's allegory of the cave. Powers' book also is all about the power of literature.)

Death Sweat of the Cluster also is a very good-looking book, with cover and interior art by Kaylee Pickinpaugh. It is only issued in paper; there doesn't seem to be an ebook edition, at least for now.

My 2017 interview with Znore, which I enjoyed re-reading, offers some background on the book.

Death Sweat of the Cluster is published by Sync Book Press, the publisher's website is worth a look.

Email ThisBlogThis!Share to TwitterShare to FacebookShare to Pinterest
Labels: Death Sweat of the Cluster

Talking of synchros I thought you might find this interesting...

The Black Books, by Carl Jung were released the week before RAW's Starseed Signals came out.
For those who don't know, The Black Books are the hand written journals that Jung drew on to create his illuminated manuscript, Liber Novus. Several references to Star Seed come up in one section of the collected books. Here's just one example:

His interior is foreign to me, a foreign star seed, which fell into this world...'

He is no child of the sun, but its brother. He put on a sun dress and covered his distant blue light in solar colours...'

The visionary accounts (of the star seed) date back to 1917. I'd suggest that The Black Books themselves are a fascinating read, but some people might find them a bit heavy-going in places. According to the editor, about 50% fed into Liber Novus. The rest, like the star seed references above, have remained hidden in Jung's family library this last 100 years.

Stay safe everyone, not looking too good here in the UK.

My copy just arrived today! Really nice looking book... Looking forward to re-reading these essays in a book form rather than on a computer although I really enjoyed most of them the first time...

Thank you very much for linking to the Sync Book website, it is indeed fascinating. Further down the rabbit hole...