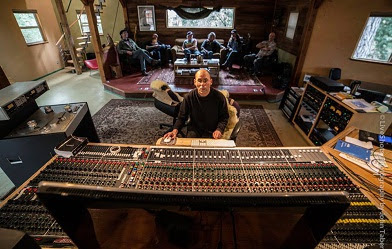 Oz Fritz in the recording studio. Like Nabokov, Oz wants you to pay attention. (Photo by John Tabor).

Commentary to Line 596: "As many people of little culture, Gradus was a voracious reader of newspapers, pamphlets, chance leaflets and the multilingual literature that comes with nose drops and digestive tablets..." Perhaps the modern Gradus would be those who consume social network posts to the exclusion of reading books.

Here is one of my favorite passages: "How much happier the wide-awake indolents, the monarchs among men, the rich monstrous brains deriving intense enjoyment and rapturous pangs from the balustrade of a terrace at nightfall, from the lights and the lake below, from the distant mountain shapes melting into the dark apricot of the afterglow, from the black conifers outlined against the pale ink of the zenith, and from the garnet and green flounces of the water along the silent, sad, forbidden shoreline."

Compare Nabokov talking about the virtue of being "wide-awake" with Robert Anton Wilson's remarks in his essay "How to Read/How to Think" in Coincidance. See also Oz Fritz's remarks about paying attention in his classic "The Art of Listening" blog post, which was part of a series.

I liked Oz Fritz's comment in the last installment: "Deleuze says that writers of what he terms "minority literature" write for a "people to come." Their audience doesn't exist when they write, their literature has to find readers who will grasp it. This seems similar to Nietzsche's philosophy. Joyce wrote for readers of the future. You have to become smarter and broaden your awareness to comprehend his later works. Nabokov teaches how to be such a reader. He creates a bridge for the current reader to become one of those "people to come" who will understand and appreciate Joyce and perhaps realize Nietzsche's or Crowley's philosophy. Twice already, through Kinbote, Nabokov explicitly expresses an intention to teach, putting the word "teach" in a sentence by itself or with one other word to emphasize this intention."

Compare with the famous anecdote about Beethoven: "Legend has it that when the Italian violinist Felix Radicati complained that Beethoven’s Opus 59 Quartets were 'not music', the composer responded: 'Oh, they are not for you, but for a later age'.” (Source).

And I do think that whether he was in the classroom or in the pages of a novel, Nabokov was teaching us to read carefully, and to re-read.

Kinbote's criticism of the reading of "wide-awake indolents" reminds me of Bruce Sterling's observation of the influence of "invisible literature" on the cyberpunks, the sort of things Gradus read.

The note to line 662 mentions this song: https://www.youtube.com/watch?v=5XP5RP6OEJI

Thanks Tom. The photo is from mixing a 2017 album by Achilles Wheel. We just finished and released their new album, Sanctuary which can be found with a google search. People who like the Grateful Dead or Americana music would probably appreciate this album.

This week's section ends with a provocative sentence: "The poets plan is to display in the very texture of his text the intricacies of the "game" in which he seeks the key to life and death (see lines 808 - 8290)." This reminds me of Leary's (with contributions by RAW) qabalistic masterpiece, "The Game of Life" The alliteration of "p" and "t" correlates with the paths of Pe and Teth on the Tree of Life which are the two crosspaths below the Abyss and the Supernals. They get suggested for study to beginning students after they've gone through Tiphareth.

Let's look at those lines in the poem:
Line 808 - "Just this: not text, but texture; not the dream
But topsy-turvical coincidence
Not flimsy nonsense, but a web of sense"

Could coincidences point to this "key to life and death?" RAW talks about a web of synchronicities in "Cosmic Trigger."

The whole section of lines 808 - 829 rewards contemplation in this regard. It concludes with:
Line 826 "...Coordinating these
Events and objects with remote events
And vanished objects. Making ornaments
Of accidents and possibilities."