The inside story of the lost RAW photos 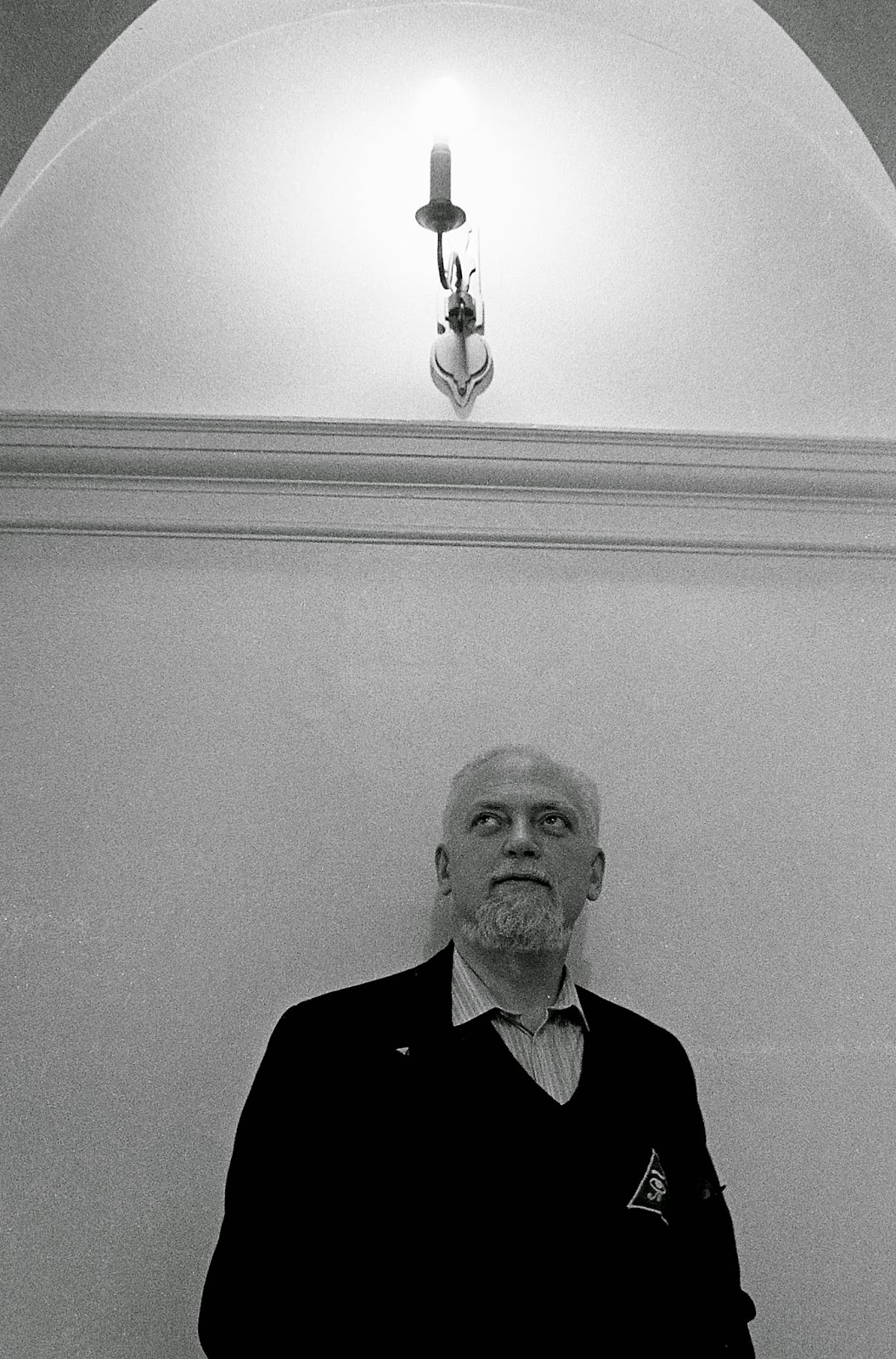 A couple of days ago, John Higgs wrote that during last weekend's Cosmic Trigger play and festival in Liverpool, a man named Duncan Harvey handed him a thumb drive filled with photographs of Robert Anton Wilson. If you checked out Higgs' excellent article, you can see that he illustrated it with his favorites from the 43 pictures that Mr. Harvey handed him. The photos were all taken in January 1986, but lost to the world until now.

Harvey was there to attend the play, too. In fact, he loved it. He writes, "Hopefully, the Cosmic Trigger play will get picked up for a deservedly long run on the West End and beyond…. It was brilliantly adapted to the stage and the performances were just fantastic – great cast! It deserves to be seen by many more."

Here is the story of  how Mr. Harvey took those "lost" photos. But before I get to that, let me tell you a bit about Mr. Harvey, who along with his partner Vicky Jackson, is the founder and director of Nomads Clothing, a fair trade clothing company. An excerpt from the company bio:

Duncan and Vicky met while backpacking around India in the late 1980s. With only £200 left in their pockets, they used the money to fill up a trunk of wonderful ethnic clothes and head back to the UK.

They soon returned to India with the profits they had made, mixing business with pleasure; staying at Buddhist retreats, discovering crafts at local markets and picking up gorgeous handmade fabrics along the way. A shared love of India and it's culture inspired them to start up their own clothing company. Inspired by Indian craft, they worked with a designer to create styles perfect for the European market, finding a niche for bohemian fashion with an ethnic feel.

But on January 26, 1986, Mr. Harvey was not a clothing importer. He was young man trying to make a living as a photographer. Duran Duran was maybe the biggest band in the world. Robert Anton Wilson was 54. The Widow's Son had been published the year before. (Mr. Harvey, who lives in Cornwall, has tweaked the pictures since giving the initial roll to John Higgs and has selected his favorites for this blog.) He picks up the story:

I was a young man of 22 and struggling to make a career as a freelance photographer in London. I was particularly attracted to doing work in the music industry (publicity shots, record covers, live work) and portraiture. I was hauling my portfolio of graduate and personal work from one side of London to another, showing it to record companies, magazine editors and agents. A red phone box was my only method of communication, from which I would call my parents twice a week to see if there were any messages or offers. I had a darkroom set up 50 miles away in Colchester with them in case I got work.

So one day in January they told me that an editor from IQ  magazine* had an urgent request for me to fill in for an absent photographer. It had to be that day and could I get to Chelsea by 6 o’clock? When I immediately phoned back the editor and he told me it was Robert Anton Wilson I could not believe my luck nor contain my excitement. (I had been introduced to the Illuminatus! Trilogy by a stoner friend at college who was a good 15 years older than me. He became a mentor and taught me a lot of things. I remember trying to play Illuminatus! The Boardgame with him and his pals – which went a bit over my head at the time).

Armed with my trusty Nikon FM and a couple of lenses, a tripod and flashgun, I public transported myself from my Balham bedsit to the Chelsea Old Town Hall. I thought it would be a good idea to buy a half bottle of vodka to drink on the way, oh and a wee spliff, just to neutralise my anxiety. I had no idea what I was doing nor any experience of anything like this. To me this was a huge assignment and possibly a breakthrough moment for my career in London?

I arrived "just right," "in the mood" and "ready to go." Except that, when I got past the doorman and found the room I was supposed to meet RAW in, he was only just starting the interview with the journalist, with whom nods were exchanged. So I had to wait a while. No problem. I remember doing a reccy of the town hall and being very disappointed with what I had to work with. The lighting was poor and I only had a cheap flash gun – which gives a very harsh direct light.

When I got back, RAW and the journalist were still deeply engaged. I was only over-hearing bits and pieces of the interview. I remember being really nervous, particularly as my time to do the shoot was getting shorter. So I got a pint of beer, which became another pint with another spliff in between. Near the end of the interview the journalist asked him about his ring, which was a massive gold (or silver) spiral – much too large for the finger. I noticed his sweatshirt with the third eye embroidered. RAW was also totally grey and seemed really really old to me.

I was trying to figure RAW out - I knew he was a huge intellect and had written all these books and been a massive influence upon all the counterculture stuff that I loved and celebrated yet he was not like a professor at all – he was so casual and, I don’t know, normal.

Suddenly, the interview was over and it was my turn with Robert Anton Wilson the Philosopher, Mystic, Genius. Hero. 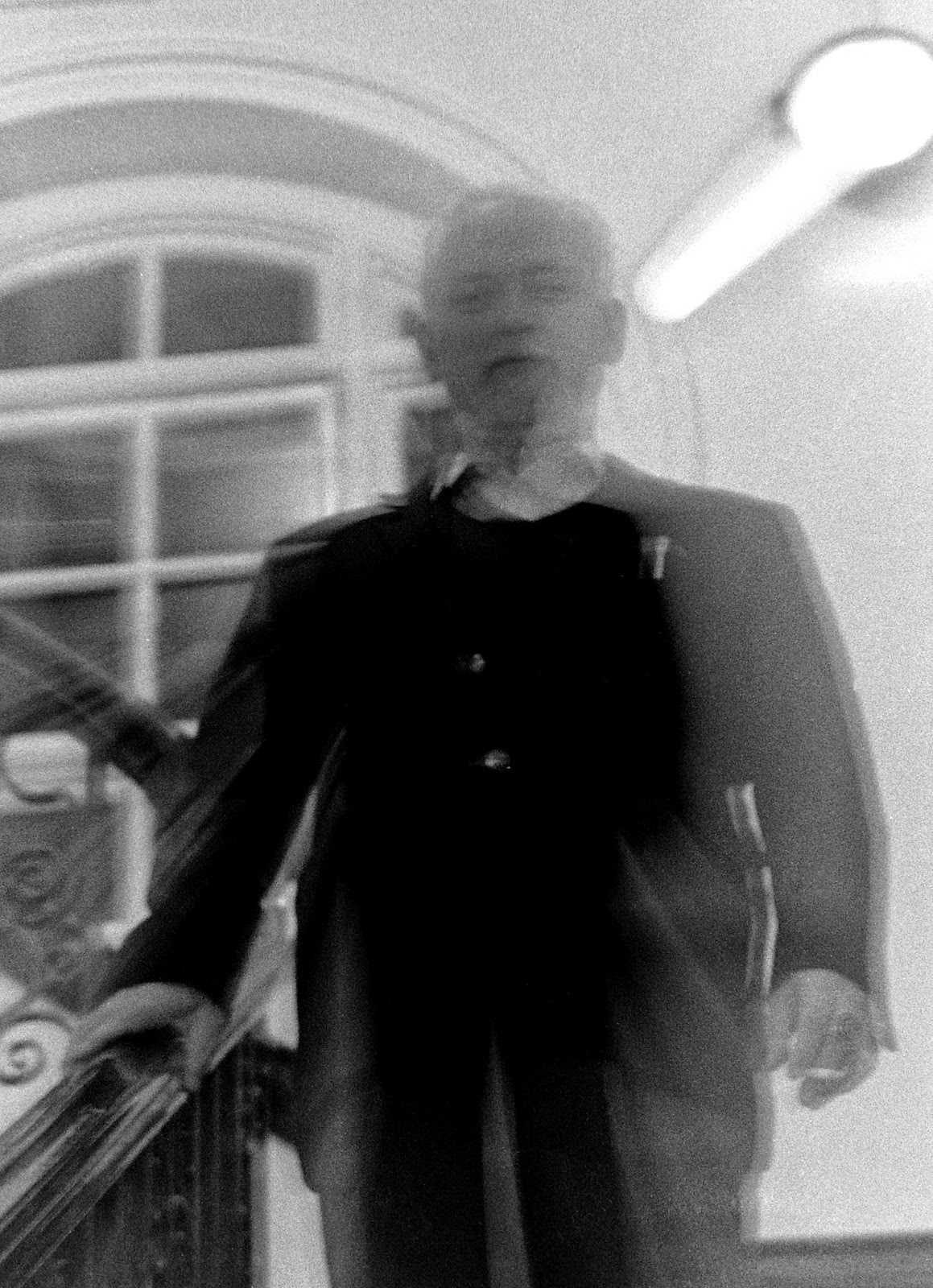 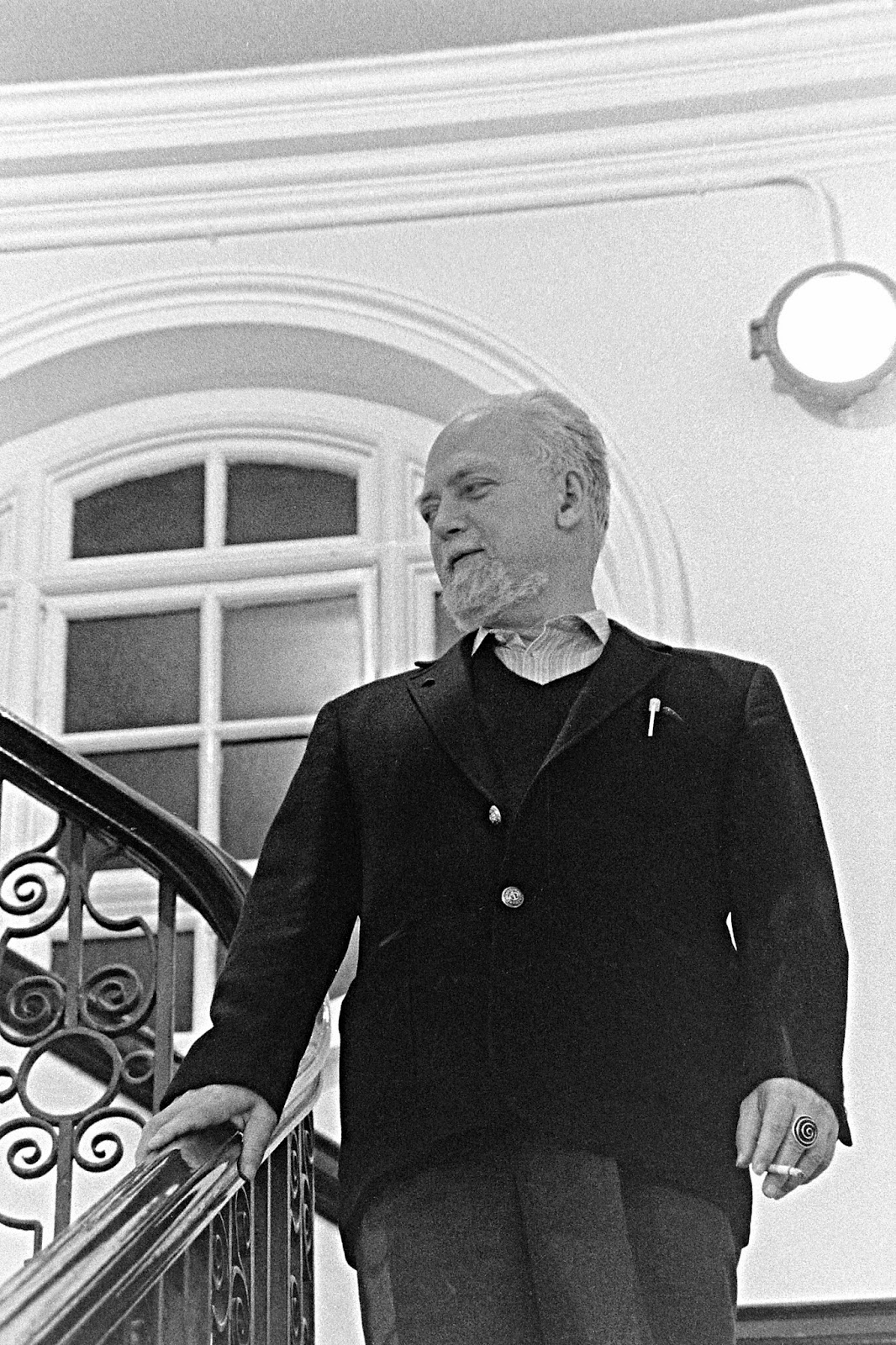 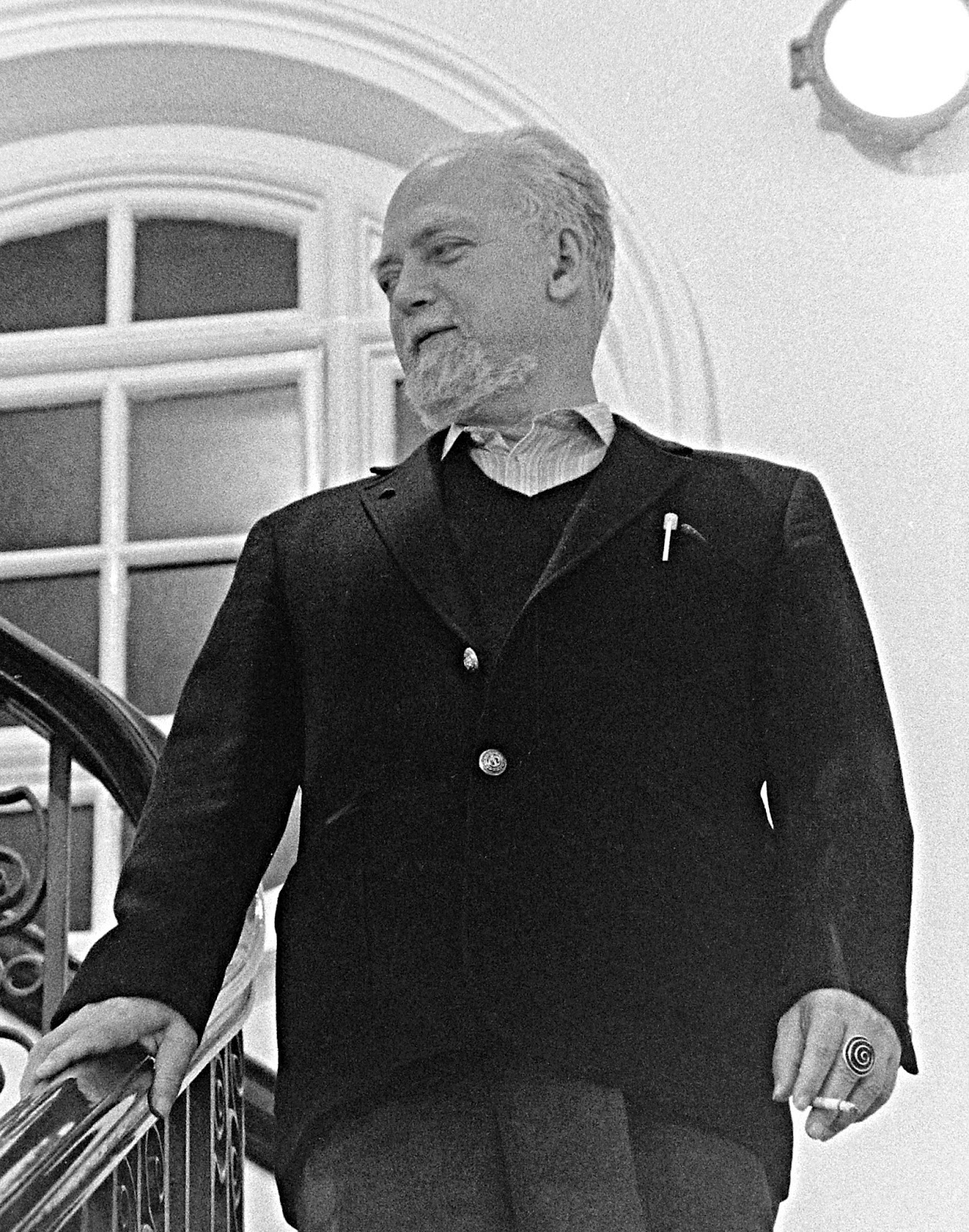 I must have already been prepared for these first pictures I took because they were obviously done on a tripod in the corridor and are looking up the staircase just from outside the bar where the interview happened.

I told RAW just to stand half way up and I started doing all this experimental shit! What was I doing? When I look at these now I am surprised, but then reminded, that this was a normal approach for me at that time. Also I suppose, it was a good ice-breaker. Basically, RAW just stands there and I fuck about with double exposures and zooming long exposure effects etc. I was trying to achieve a ‘quantum jump’ effect. He was very happy to comply. 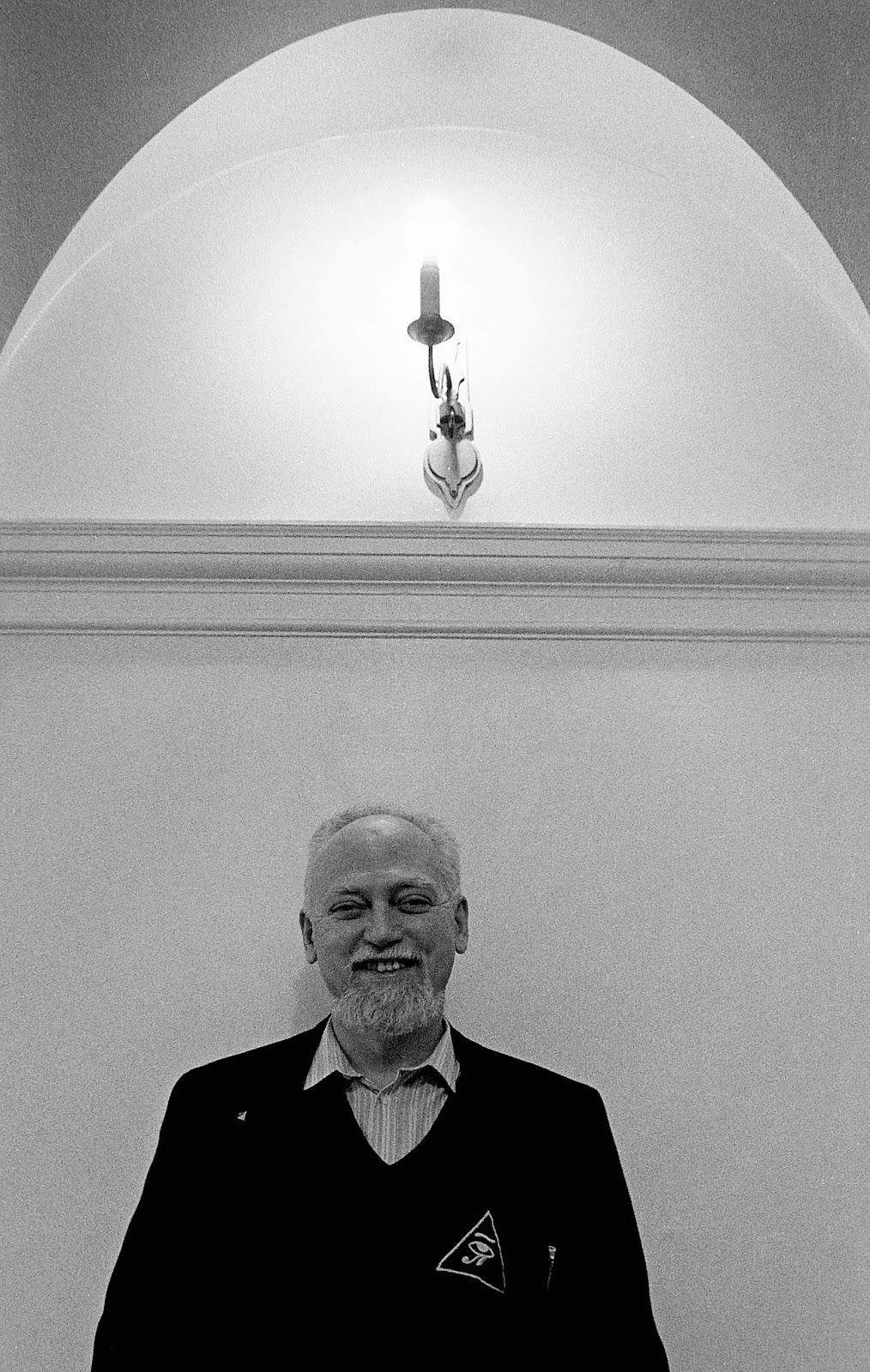 Here I was using what I had at hand which was a light in a recess of the corridor. The idea was illuminati(on). I remember liking the ‘domeness’ of the composition. Anyway, I think I sold the best negative from this group to I know not who – a publishing agent? If I did it today I would have got a lot closer in. 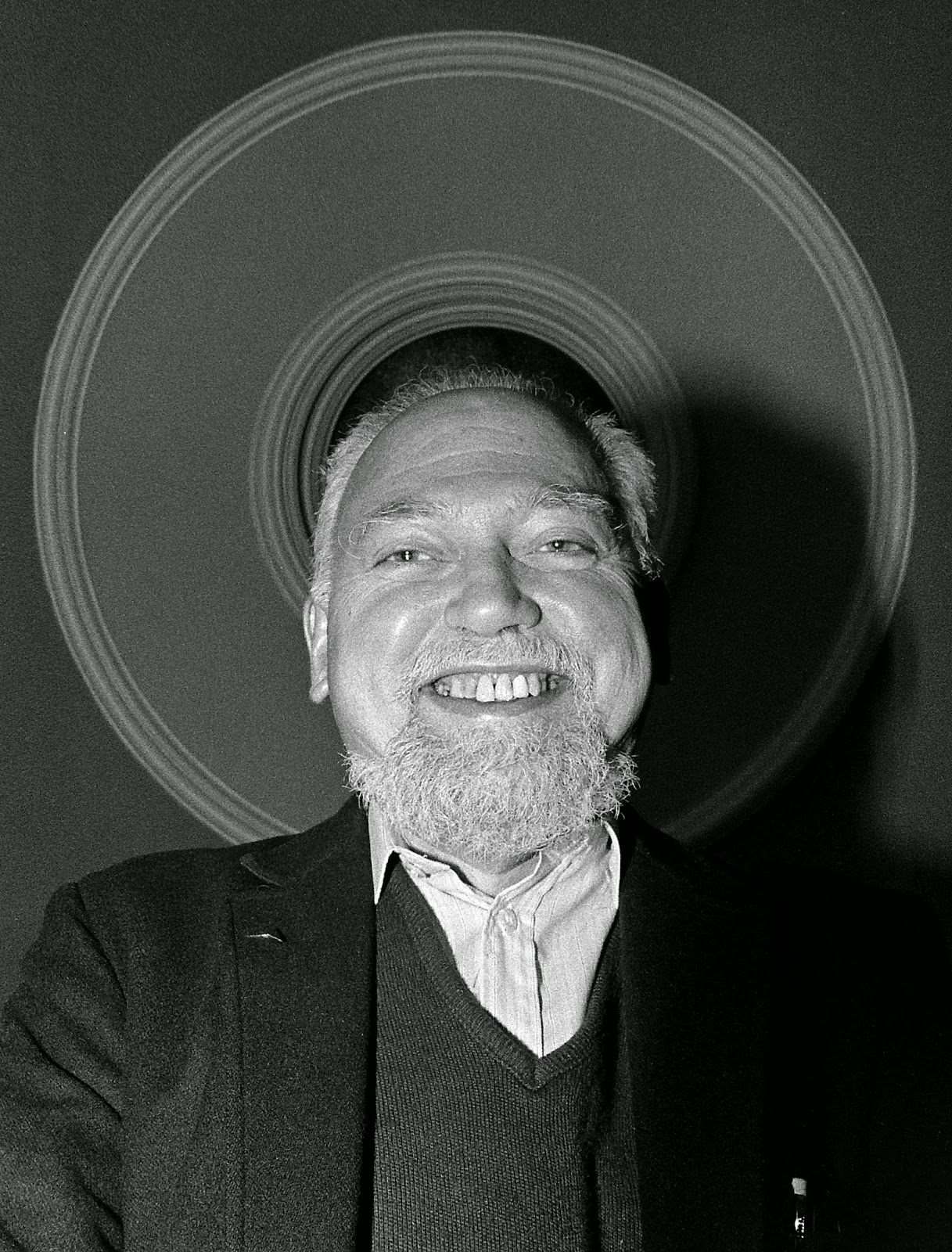 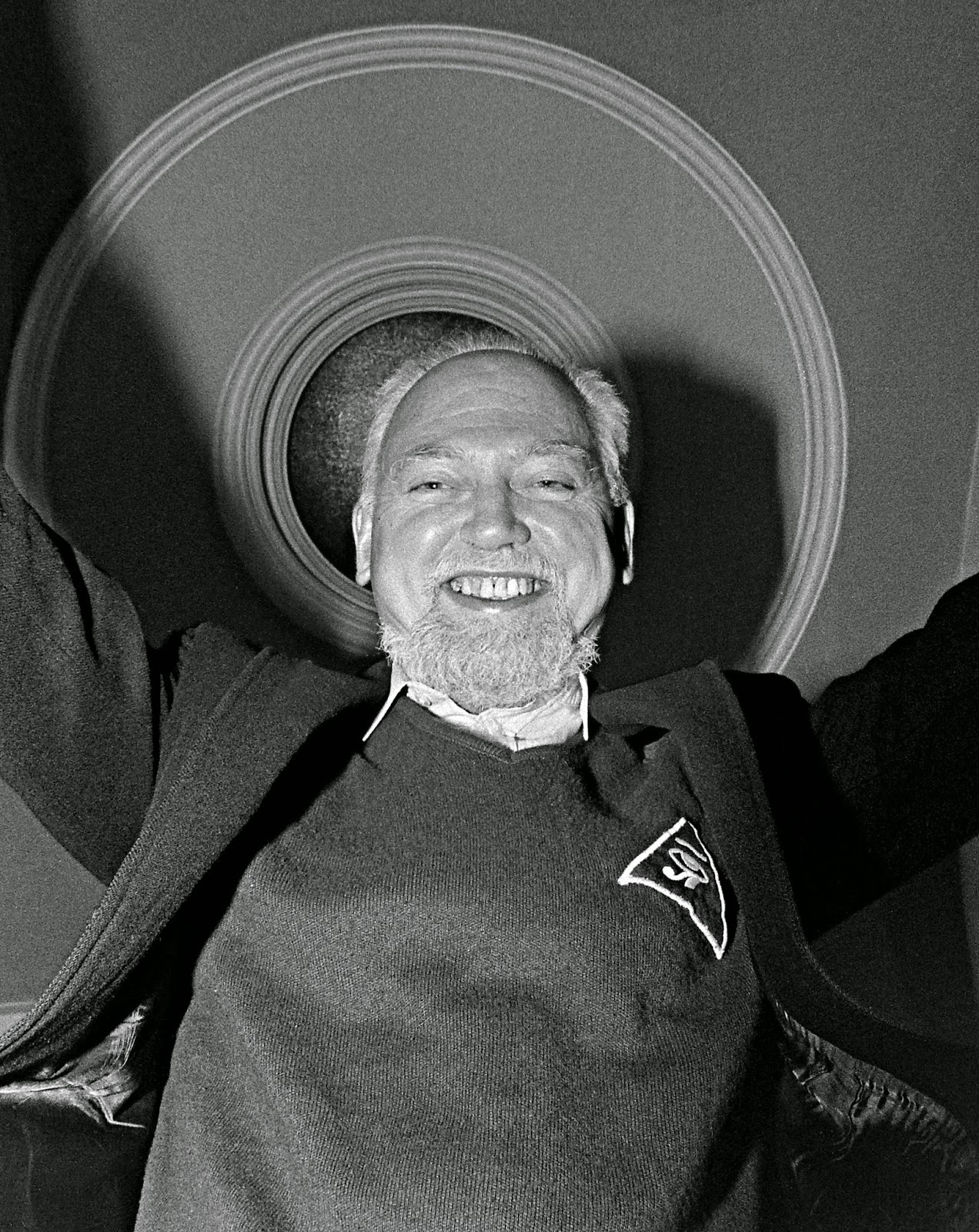 Out of desperation I notice that above on the ceiling is an architectural circle feature around the light fitting and after loving the ‘domeness’ I am getting carried away now. So I lay on the floor and ask RAW if he would mind leaning over to get himself, mainly his head, in the circle to form a ‘halo’ effect. We start laughing together as he can’t lean over enough while I’m trying to compose the shot. And I’m saying ‘ a bit more over Bob please’. The shot isn’t really working but he was finding it funny which made me lose it even more. I realise I have properly lost it when RAW says to me ‘what are you on?’ And I confessed that I was indeed fucked up, and he knew I wasn’t joking so we laughed some more until I had tears running. That is one of the reasons this day was so memorable to me. 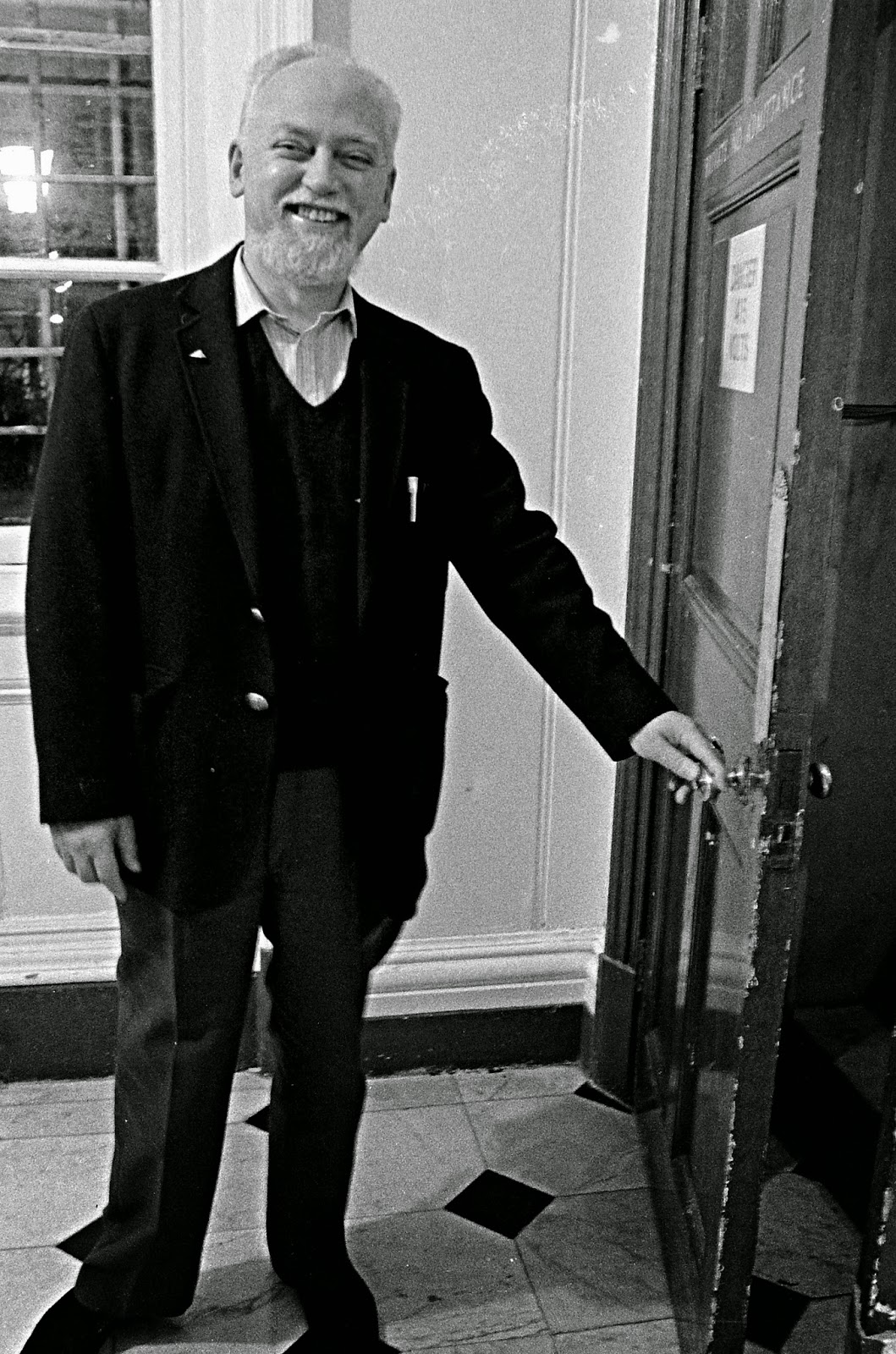 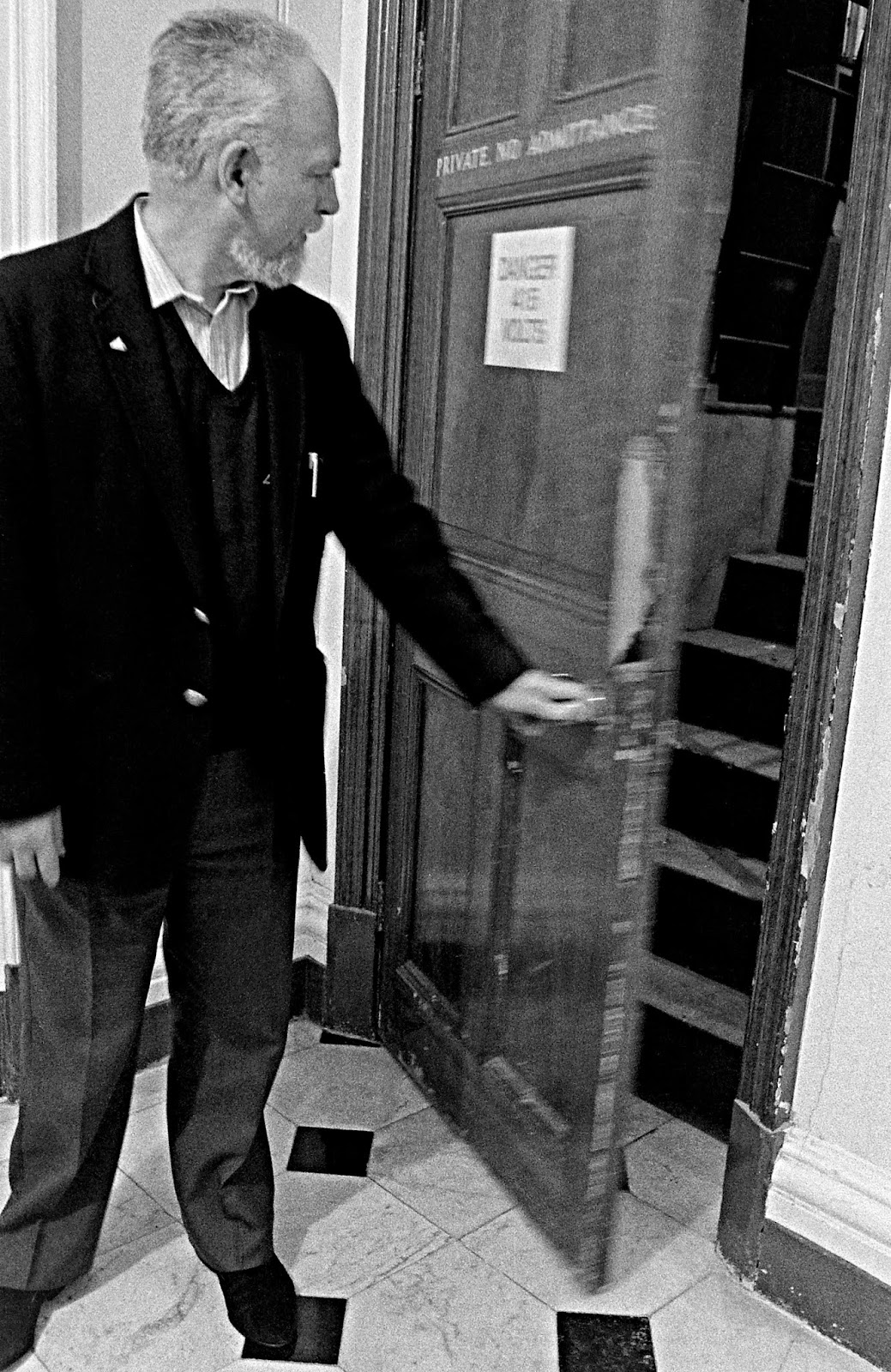 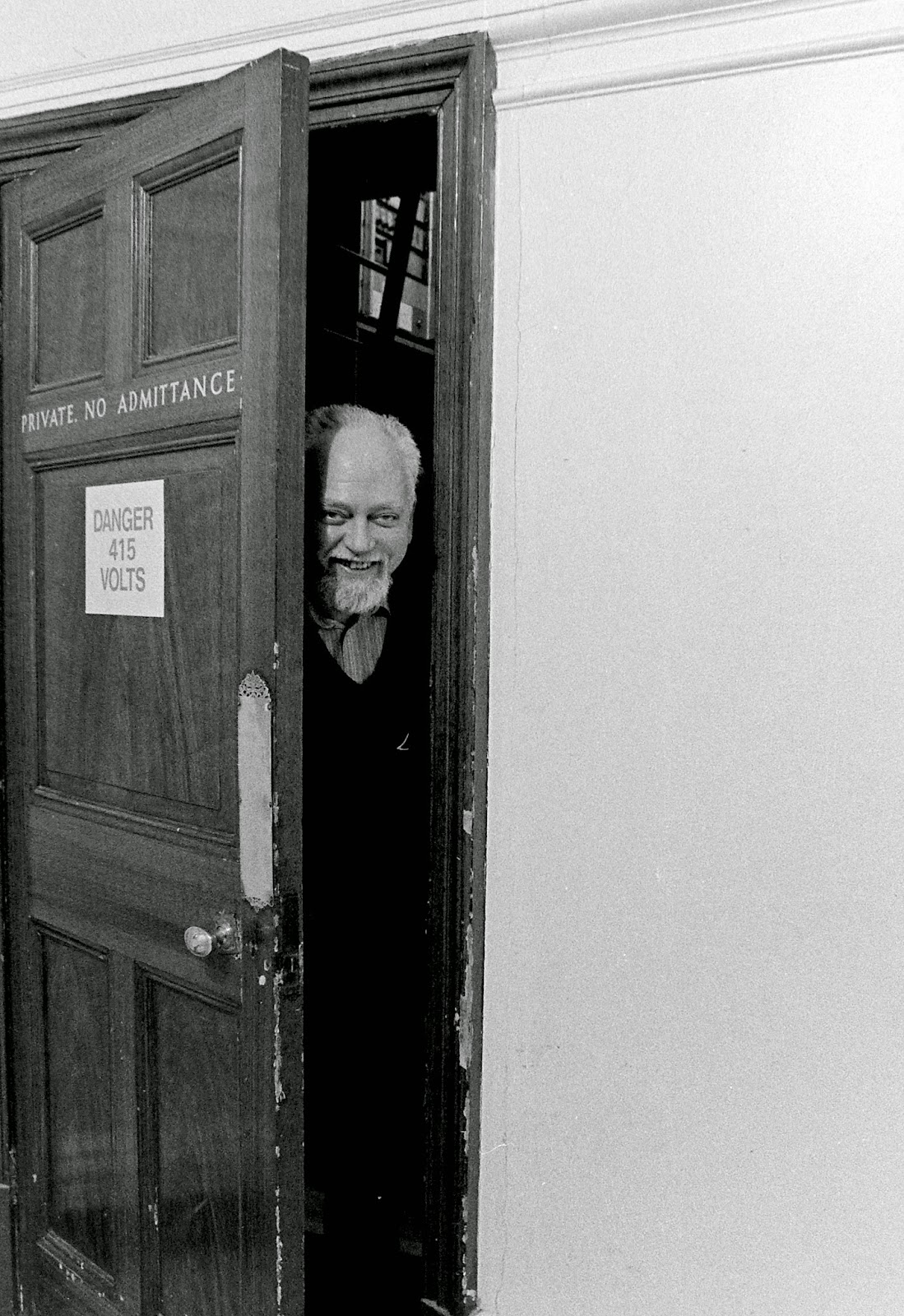 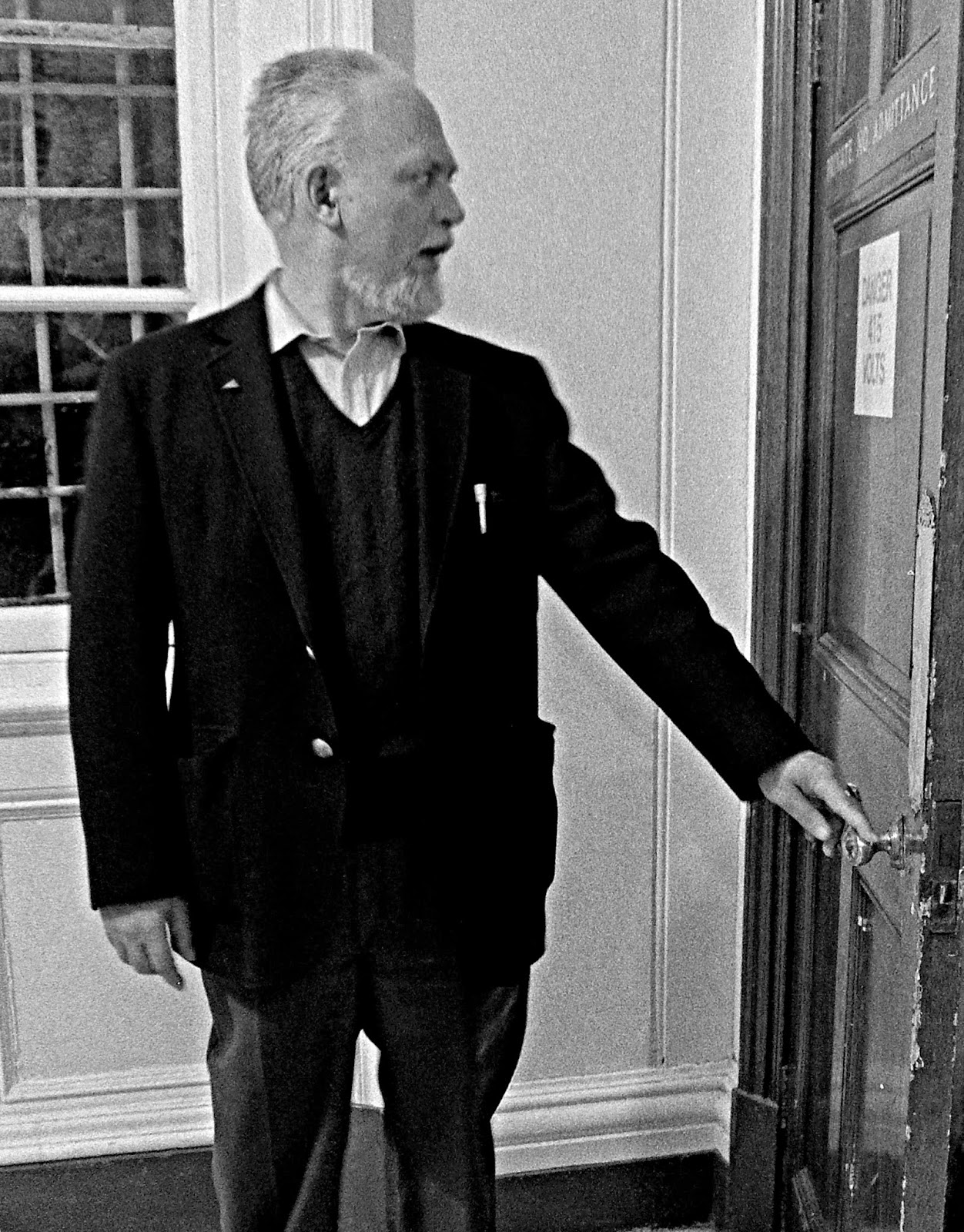 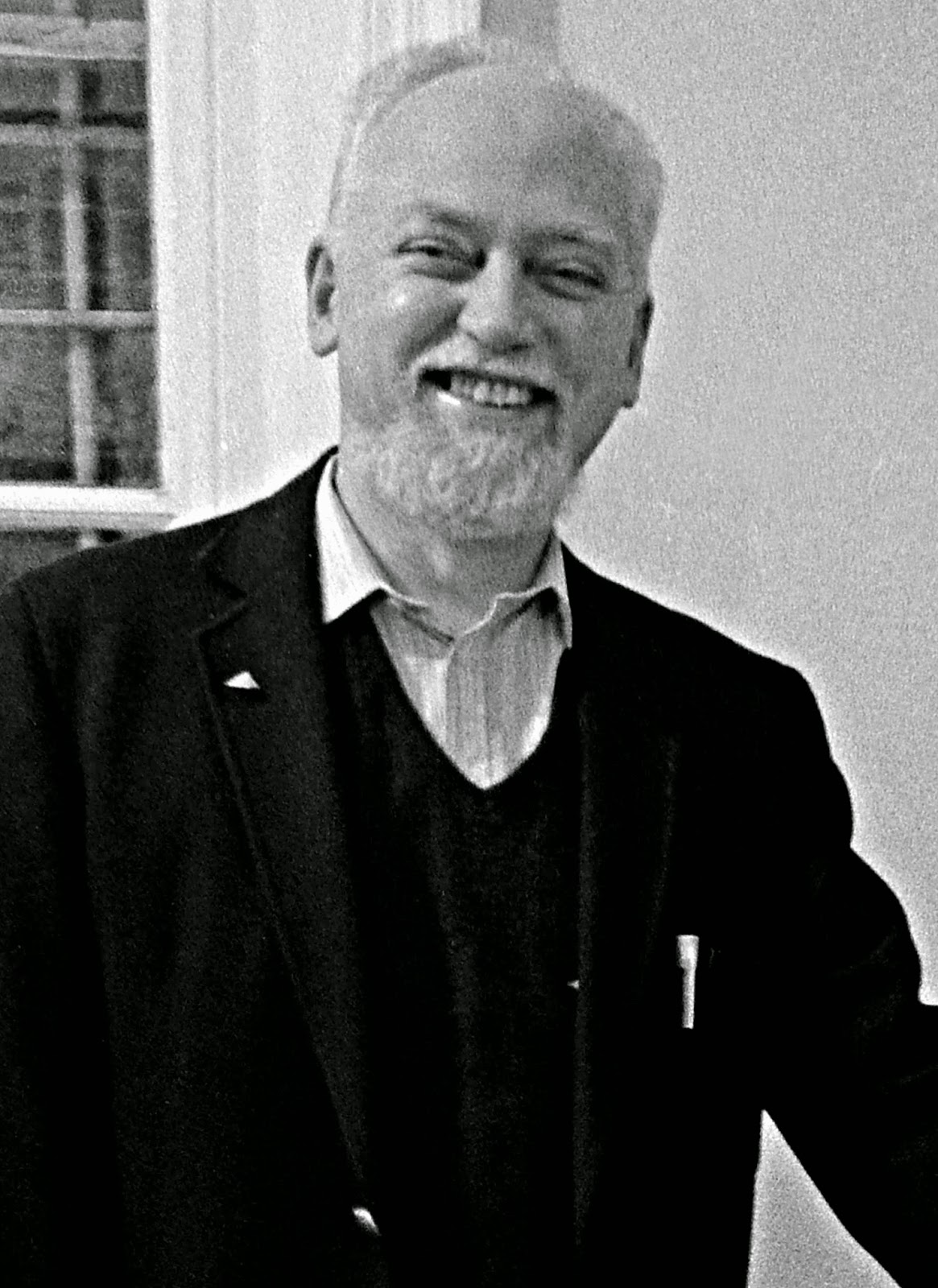 This, as I remember, is a maintenance door that I had earlier found on my reccy. It was in the same corridor by all the rest of the above nonsense. By now Bob has loosened up while I am gathering myself and he graciously mucks about with the door…. He even goes in the fucking cupboard. (Frame22 is JH & my favourite from the whole series). Looking back at them now this could be interpreted as ‘The Door to Chapel Perilous’. Hmm tempting to photoshop the sign on the door…. 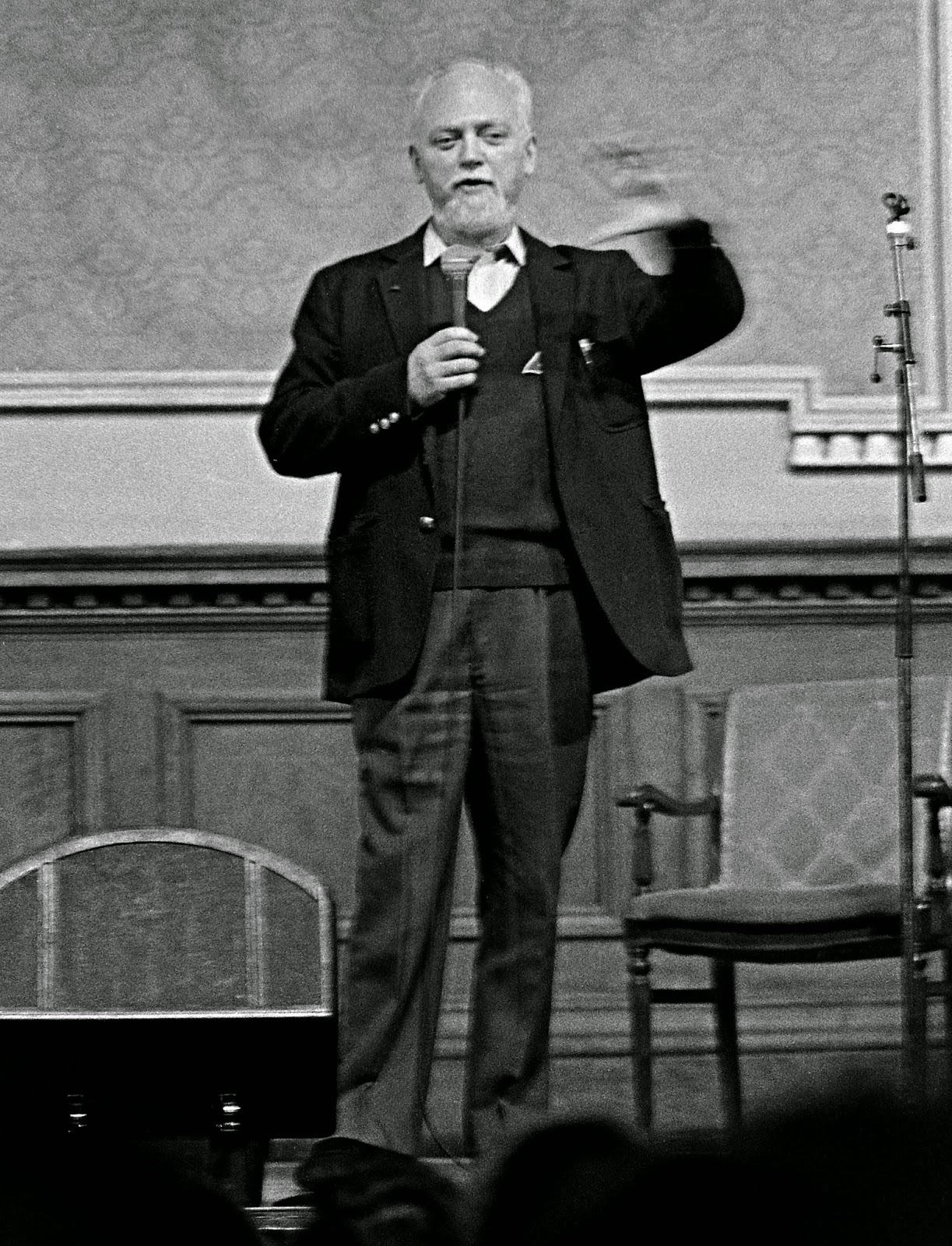 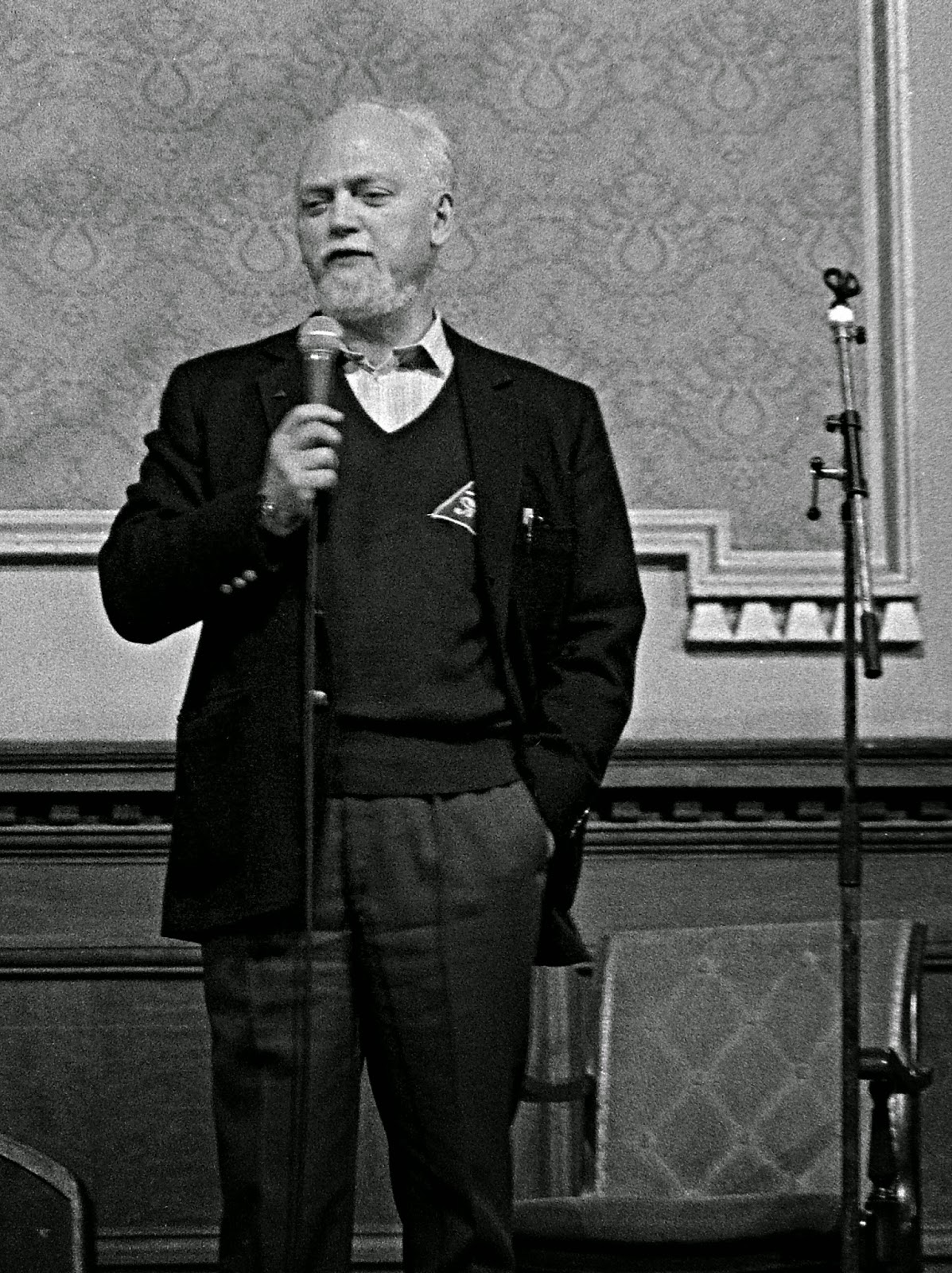 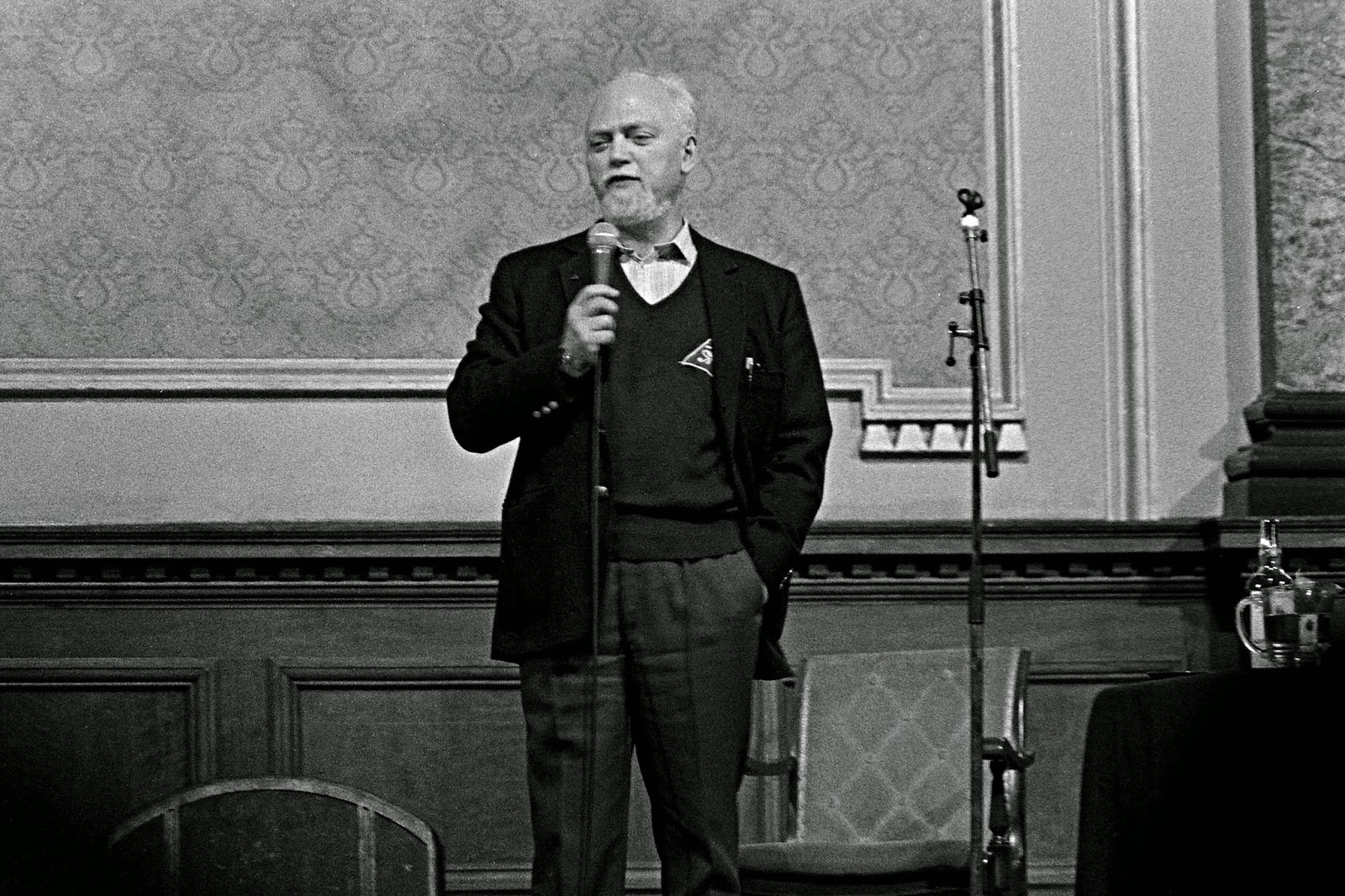 I stuck around for his talk which he was touring. (I can’t remember what it was – maybe Schroedingers Cat stuff – even though a few years after publication). There is only 1 well focused image here - RAW was animated and walked about the stage with a lot of hand gestures. However, on this night there was a persistent heckler who kept challenging RAW with Christian nonsense. RAW was very patient and did all he could to converse with the heckler to no avail. The heckler wasn’t thrown out for quite a while and Bob just had to get on with his talk with constant interruptions, but he was such a gentleman about it.

By the end of my encounter with Robert Anton Wilson, I found that I loved the man. He was so warm and generous and full of vitality and acceptance. We had laughed together — he had sussed me and it was funny.

The publication went bust shortly after, so I was not paid for that commission. Perhaps explains the original photographer’s no-show in the first place.

Shortly after, in Feb 86, I was contacted by a RAW publishing agent who bought all the negatives off me.

Until 1 month ago I looked in my attic and went through the archive and discovered that was not true.

I had only sold 1 negative frame, and I have since digitalised the remaining 43!

I did not become a professional photographer.

* It may not have been IQ. It could have been a different mag called ZigZag that commissioned then went bust.
on November 29, 2014