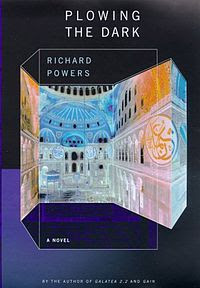 Tired of "homework" reading such as reading nominees for the Prometheus Award and reading locally written books for my newspaper, I decided to give myself permission to read something I really wanted to read. I'm a big fan of Richard Powers, so I read Plowing the Dark, one of his I had never gotten around to. It's a good novel; I think there's only a couple of his left I haven't gotten to yet.

I mention this because I guess I'm curious about other people's reading habits; one of my tendencies is that when I find an author I really like, I try to read as many books by him or her as I can. Robert Anton Wilson would be an obvious example; for the few I still haven't read, I'm waiting for the definitive Hilaritas Press edition. I've also read everything by Jane Austen I can find, and all of Tom Perotta's books and all of Jack Vance's science fiction titles. I only have 1-2 Iain Banks Culture novels left. Every few years I do another Vladimir Nabokov novel. And so on.

Plowing the Dark is largely about tech geeks in Seattle working on a virtual reality project; the book makes the argument for the novel as a art form, and as a form of virtual reality, as Powers remarks in this interview:

At the end it's as if a digital Byzantium has somehow crossed over into the real world.

That is my metaphor for reading; that's what reading does. In the end, the book becomes an apology for the virtuality of fiction, fiction not as a replacement for the real world, but as a hybrid place where the real world is suspended and reconstituted into something more survivable.

Addendum: I forgot to mention that the title Plowing the Dark apparently takes it title from a poem by William Blake. It's believed to be a reference to "Or the plowman in darkness plow?" line 20 of "Earth's Answer."

John Higgs says, "There's a fair amount of plowing in Blake - hence you find Blake-titled novels like Drive You Plow Over The Bones of the Dead by Olga Tokarczuk, who won the Nobel Prize a couple of years ago. Plowing in Blake is often a metaphor for revolution, in the French and American sense - the old order needs to be overturned in order that new life can grow - so he talks a lot about the plow passing over nations."

I try to cast a wide net in reading, but yeah, there are certain authors whose work Ive tried to read all/most of... John Barth, PKD, RAW, Crowley jump to mind.