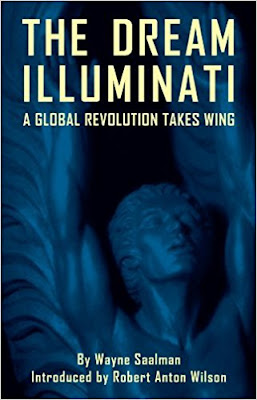 So, this week is a doozey. One of the thoughts that has preoccupied me while reading this book is how well it has aged and whether the ideas that RAW introduces are as relevant today as they were a little more than a decade ago. When I first read email to the Universe I was what I would call a RAW-purist and naturally agreed with everything I read- emphatically so. Now that I have changed and am revisiting the text I am finding the reading to be a much more provoking and rewarding experience.

pg 54 In the initial haiku we have a reference to dolphins and their presumably idyllic lifestyle (without money! how nice of an idea) which echoes back to Howard and his compatriots in Illuminatus!

There’s an interview where RAW says that every so often his mother would go crazy and beat him up, and ever since then he’s been afraid of angry women. I consider it most charitable to treat the two Not All Men essays as triggered reactions and move on to more interesting parts. (There’s some good stuff in them, but he’s said it better elsewhere.)

Another book about flying is J.G. Ballard’s The Unlimited Dream Company.

I was laughing at the Marx Brothers about 20 minutes before seeing this comment; just watched Horse Feathers.

General statements and careless language can probably lead "beyond the bounds of reasonable discourse"; especially the narrow and manipulative language of political discourse we hear every day, such as: "We need more jobs". In my view we do not need more jobs at all. We need more well paid jobs, meaning jobs that pay $20 and above. Who needs more $9 or $11 jobs? Another example that makes me go ballistic when I hear politicians say: "That's what American people want." Really? Which American people? If politicians would just modify their language by inserting words like "some" or "most" (Some/ Most American people want that.) I think it would help a lot instead of constantly putting all American people in the same basket as if differences do not exist. When anyone from this administration makes a statement: "That IS who American people voted for and that IS what American people want" - I find it sounding very hierarchical and patriarchal (even if a woman says it). (Welcome to Disunited Kingdom of USA!) As RAW wrote: "Every tribe has its own "reality - map"."

The person who really caught my attention in the past several weeks was Tristan Harris, a Silicon Valley insider who left Google to lead "Time Well Spent" movement to align technology with our humanity. I am sure some of you watched him on "60 Minutes" or on Bill Maher's HBO show. Here is the link on "how technology hijacks people's minds and psychological vulnerabilities":

Harris posits that "attention based companies" such as Google, Facebook, etc, are in "race for attention" in "attention economy" where only one side profits in billions of dollars. I wonder if we could use technology to abolish poverty in the US and globally? Imagine getting paid on each click !

Jaron Lanier, a pioneer in digital media and author of "Who Owns the Future?", postulates that the vast majority of internet users (mainly the middle class) is increasingly disenfranchised from online economies. According to Lanier firms can accrue large amounts of data from users at virtually no cost and instead of paying each individual for their contribution firms keep all the money to themselves.

We have all heard of "shared economy". Where is it?

The discussion of Confucius on page 62 points to Wilson's study of Ezra Pound and Fenollosa, two members of the Tale of the Tribe.

Coincidentally, I just watched "The Making of Sgt. Pepper" where Paul discusses Julian Lennon's painting "Lucy in the Sky with Diamonds" and mentions how children often paint people floating, not connected to the ground. I thought of this reading pg. 67 on dreams of flying.

I reread "Shocking Hidden Facts About Male Non-Violence" during my lunch hour today, and I thought it held up fine. Of course, there's a problem with the minority of males who are violent, as anyone who follows the news knows, but there is also a problem with a minority of Muslims who are violent. Yet if RAW had written an essay attacking Islamophobia, I daresay many readers of this blog would be fine with it. Perhaps it is a feature and not a bug that the piece, as Gregory observes, has become more controversial.

Eric, I am glad you watched Harris on "Real Time". I sent a letter to both of them: Tristan and Jaron. I am very concerned about the "invisible hand" style of violence.

The State - all it has, it has stolen!
It even bites with stolen teeth!
- Nietzsche

I agree with Cleveland Okie on this one.I think "Shocking Hidden Facts About Male Non-Violence"holds up just fine. It's one of the many things I love about Bob. Not being afraid of cultural taboos.Master of intelligent dissent indeed. I also love that Bob refers to Leary's info-psychology in this text. I first heard about Info-Psychology through Christopher S. Hyatts book Undoing Yourself and other energized meditations. Talk about a reality-tunnel enlargement! Info-Psychology really changed my perspective on our planet and the "big picture" of humanity. S.M.I.2.L.E. Do you know what I mean?😉🖖

Yes, swordfish is the password that gets Groucho into the Speakeasy where he wants to hire football players in “Horse Feathers.”

“Shocking Hidden Facts About Male Non-Violence” reads to me as a very sarcastic caricature of the radical feminist literature of the time. I’m not familiar with the propaganda of “Steinheim and Company” so call it an intuitive guess or speculation. The “suppressed facts” starting on page 56 sound exaggeratedly absurd and one-sided (like a caricature) and really have nothing to do with gender. An example of the one-sidedness of one of the less absurd facts: “Jazz, was created almost entirely by Black males.” This appears true, but leaves out the part that jazz musicians got their first gigs playing the brothels in New Orleans – working women provided the first public outlets to hear jazz. I suggest that Wilson intends to highlight the selective perception of radical feminist propaganda in this and the other “facts.” He ends that section by saying: “All of this sounds strange, bizarre, almost unbelievable, I know.”

I find amusement taking some of Wilson’s statements into a different, current context as if they became inadvertently prophetic. P. 65: “ … that the Republicans represented the Orangemen…” Recently busted classified secrets leaker, Reality Winner, allegedly referred to Donald Trump as an “orange fascist.” Trumps orangeness appears a much visited trope in current politically based comedy. P. 68: “… and the Fool is depicted walking off a cliff – just like Donald Duck or Wiley Coyote in the cartoons. Funny coincidence, what?” E.J. Gold, a consistently strident vocal critic of the fake President has referred to him as “Donald Duck Trump” among other things. P.68: “ Like Porky Pig walking off a cliff…” Bill Maher recently ranted about Trumps overweight physique.”

In the Introduction, R. Michael Johnson wisely hints at examining the form of “Email to the Universe.” A main theme in the essay “Dreams of Flying,” starting on p.67, concerns going beyond limits as suggested by the quote from “The Center of the Cyclone” by John Lilly on p. 69. John Lilly also distinguished himself as one of the foremost researchers into dolphin intelligence. “Dreams of Flying” is framed by three haikus, one before and two after this essay. Two of them mention dolphins, the third describes clouds floating above the hills. Lilly also designed the first floatation tank. Wilson talked about using floatation tanks as an imprinting technique in his lectures. Coincidentally, I mentioned “The Center of the Cyclone” in a short interview about floatation tanks a couple of weeks ago. That video interview got posted on Facebook yesterday by the people who made it.

p. 74 – 76: Wilson mentions a dream that he apparently really wants people to know occurred in 1968. He mentions that fact FOUR times – three of those times on p. 76. The number 68 previously turned up on the first page of “Illuminatus!” I have discussed the 68 trope frequently in the past. The paragraph on p. 68 that begins, “The Sufi order employs as its emblem a heart with wings …” and ends with “… Hermes, was portrayed as more human, but had bird’s wings on his sandals” symbolically communicates how I interpret the 68 trope.

Great original description of Nuit, one of Crowley’s primary conceptual persona, at the top of p. 74.

I agree with Wilson’s comments about the film “2001, A Space Odyssey.” The word he puts in quotes, “haunting” has interesting gematria related to the multiple symbolism expressed earlier in the same sentence. I’ve had profound contact experiences with both “2001” and with “The Man Who Fell To Earth.”

p. 74 RAW advises practicing the excellent Middle Pillar ritual on a daily basis for students of qabala suggesting that this became his praxis at one time. Gregory correctly states that Crowley didn’t write this ritual though the quote does accurately paraphrase what Crowley wrote in Liber O (Sub Figura VI) section 6. Any beginning student of magick knows that Regardie and not Crowley came up with the Middle Pillar ritual, so in my opinion this doesn’t indicate an oversight on RAW’s part, rather a deliberate piece of minor disinformation that aligns with a Crowley trope RAW used to publicize that roughly goes: “other gurus say believe me, believe me, Crowley says DON’T believe me.” This piece of disinformation suggests not automatically “believing” everything RAW writes. I suspect this reflects RAW’s intention with the disinformation.

Much further exegesis of this amazing essay on magick, “Dreams of Flying,” could surface, but there is only so much time in the day.

While it has been noted elsewhere On this blog that there is no evidence that Umberto Eco followed Robert Anton Wilson, it is interesting that Foucalt's Pendulum followed Illuminatus! by 12 years, and that Eco's Serendipity: Language and Lunacy followed Bob's similarly titled essay by two years.