Look what's on the cover 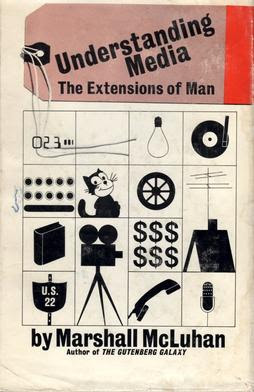 Cover of the first edition

Charles Faris, catching up on his reading just like me, sends me a photo of the book he has checked out of the library. It's a first edition of Understanding Media: The Extensions of Man by Marshall McLuhan, also pictured above.

Charles remarks, " I just borrowed from library to see if I could understand understanding media now that I’m an old fuck and who knew there’s an old school computer print 23 on the cover?

"I’m also noticing how much 8circ is influenced by McLluhan. In some ways it could be helpful to think of 8circ as a media theory especially in terms of media as extension. Of course this begs the question 'extending what?' "

McLuhan also figures in the book I've begun, Death Sweat of the Cluster by Znore.