Trapped by his books! Mike Shea on Robert Shea

I've always been interested in Robert Shea as well as Robert Anton Wilson, and early in the  history of this blog, I interviewed Mike Shea, who is Robert Shea's literary executor and maintains the official BobShea.net website. (See the bottom of this page.)

I decided to seek a new interview for Robert Shea Week, and Mike obliged. I've been in touch with him periodically over the years for information or to raise a point, and he's always immediately replied.

I asked Mike for a biography and he obliged: "Michael Erik Shea is a writer, gamer, and programmer living in Vienna, Virginia with his wife Michelle. Mike is the son of Yvonne Shea and Robert Joseph Shea, author of Illuminatus! and other novels.

"Mike is a huge Dungeons & Dragons nerd. He runs Sly Flourish, a website and Twitter feed dedicated to building better D&D Dungeon Masters. Mike wrote and self-published a number of RPG and D&D related books including Return of the Lazy Dungeon Master, Fantastic Adventures, and Ruins of the Grendleroot. He also wrote freelance articles for Wizards of the Coast, Kobold Press, Pelgrane Press, Sasquach Games, and other RPG companies." 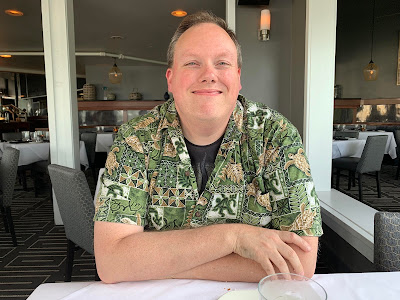 As far as you can tell, from sales, contact with fans, etc., what is your father's most popular book? I know it's probably hard to track downloads.

MIKE SHEA: Illuminatus! is still, by far, the most popular of his books followed by Shike. The sales on the books are roughly proportional to the way they were when they were published. One of the harsh realities of being an author is that your first book may be your most popular and you never quite get back to that level. I don’t remember my father talking about that very much but I imagine it’s something he thought about and it’s a hard thing to deal with. I see it with a lot of authors as well. Many people have said that Shaman, his last published book, was his best.

Has there been any interest in Hollywood adapting any of his books? Does the Creative Commons license you use mean they would have to pay you to turn Shike into a miniseries?

MIKE SHEA: The only interest has been for Illuminatus! Every few years a company would option the book for a movie, TV show, VR game, or something like that. It’s a nice unexpected bit of cash once in a while but isn’t job-quitting money. Once optioned, however, things usually fall apart. Recently however a company picked up the rights for Illuminatus! for an Amazon series. The big digital players are buying up properties like crazy and they seem to have deep pockets for experimentation. You can read more about it here.

Unfortunately, none of my father’s other books have been optioned.

Did your father ever give you advice on writing?

MIKE SHEA: Not really. I wasn’t doing a lot of writing when he was alive. It wasn’t until after he died that I got into it. A shame. Reading through his journals and interviews elsewhere helps me get an idea for the style of writing he would have recommended. Of course, I’d give anything to have had him read something I’m writing now. I think he’d love it. One of the things I always admire, and something that helps guide my own direction now, is that he never let go of being a kid. He loved Buck Rogers comic strips from the day he was like 5 years old to the day he died. He found a guy who was reprinting Buck Rogers in color and would mail the guy begging for more of them. He was never afraid of hanging onto childhood fantasies. He would doodle rocket ships on everything.

Do  you know if he particularly liked any of the cover art for his books?

MIKE SHEA: There were some he sure didn’t like. The ones that had Jebu from Shike with black hair pissed him off when the fact that he had red hair was a big part of the story. I think he always dug the original Illuminatus! covers, as do I. They’re classics.

I recently re-read Patricia Monaghan's essay "Physics and Grief," did you know Monaghan very well and what was she like?

MIKE SHEA: I can’t say very well but we spoke often before and after my father’s death. She was really smart, of course, and funny and warm and caring. She took care of my dad at the worst parts of his life and I am always eternally grateful for that. I wasn’t ready to do that at 20 years old. I liked her a great deal and was really happy she was in my father’s life.

How did your father and Robert Anton Wilson stay in touch over the years, was it mostly letters, and are there any new clues on what happened to that correspondence?

MIKE SHEA: I think it was occasional phone calls but probably mostly letters. I don’t have any of the correspondence in my own archives. I don’t know if Christina Pearson, Wilson’s daughter, has any. She’s never mentioned them to me. [I've asked on the RAW side and had  no luck. So far, no one seems to know anything. -- Tom]

Do you want to tell Robert Shea fans something about him they might not know? Is there anything your father told you that sticks with you that you'd like to share?

MIKE SHEA: He was a pretty normal guy. For the guy who edited at Playboy and wrote Illuminatus! and marched in the 60s and all of that, he was a pretty straight forward dude. He took his walks every day. He took naps. He was always soft spoken and relaxed. Our family certainly had some hardships but he always kept on going. He had an awesome office full of his tchotchkes and tacky souvenirs that he loved. Even though he stopped smoking in the early 80s his office always smelled like a tobacco shop, which was nice.

Boy did he collect books. He had these huge old green shelves in the back of his office. He filled it up with books, then crammed more books above the ones lined up on the shelves, then another row in front of the first, then more crammed in above that. Pretty much as many books as you could pack in. One day I came home from school and he was yelling at me for help. The book case had collapsed in front of the door of his office, trapping him inside. He was slowly working his way through the bookcase, piling up these monoliths of books across the office floor. He might have starved back there but at least he had something to read!