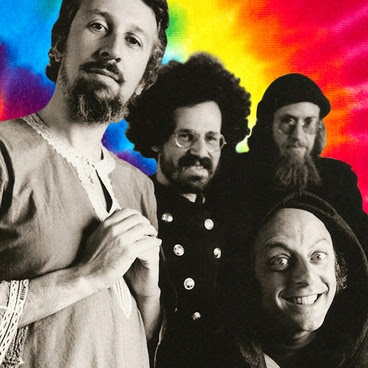 
Welcome to lucky week 23 of the RAWIllumination Cosmic Trigger Reading Group. This week we take a look at ERP and Bell’s Theorem (193) and “see what modern physics has to offer.” 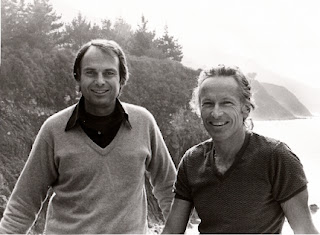 Of course, what Bob called “modern physics” in the mid 1970’s is not what we would call modern physics today. And of course, like Bob, I am not a physicist. The Author’s primary sources for information on the relationship between physics and consciousness were members of the Fundamental Fysiks Group, which included Jack Sarfatti, Nick Herbert, Fred Wolfe, Fritjof Capra, and Saul-Paul Sirag. Many of the members of this group also made up the Physics-Consciousness Research Group, which was founded by Sarfatti and Michael Murphy (of the Esalen Institute) and funded in part by Werner Erhard of EST fame. 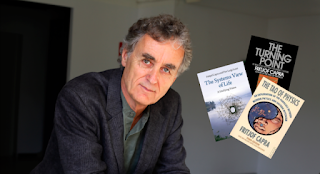 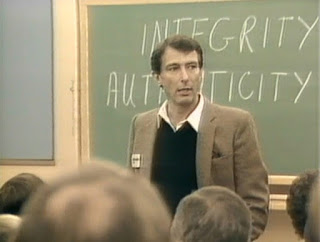 At the time that Bob was writing Cosmic Trigger the PCRG approach was white hot, and best-sellers such as Space-Time and Beyond (1975—Fred Wolfe), The Tao of Physics (1975—Capra), and The Dancing Wu-Li Masters (Gary Zukav—1979) were high in the public consciousness. The Zukav book in particular, partially ghost written by Sarfatti, Bob’s primary source for New Physics in CT, was a big hit and set the tone for the popularization of anything that mixes Quantum Mechanics and Eastern Mysticism into a frothy stew. Today we have Deepak Chopra, Amit Goswami, and Michio Kaku, all of whom are prone to much more Pronouncement and much less Model Agnosticism than Bob, which could explain a bit about his life-long financial struggles (but I digress). 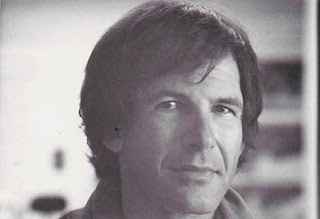 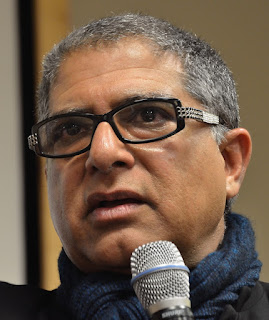 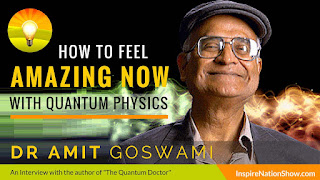 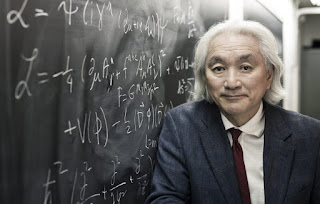 Of course there was also a lot of push-back from The Skeptics, led by The Amazing Randi and his famous million dollar prize, which has yet to be collected, although this is hardly surprising given that PSI, ESP, and Telepathy etc. seem to operate more in a Quantum Chaos throw the dice manner, whereas Randi wants proof that looks more Newtonian Classical, like “put that damned particle through the left slot EVERY TIME, dammit.” Again, not much Model Agnosticism going on. 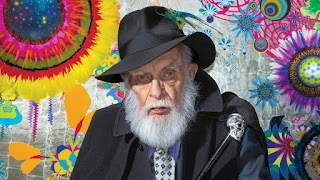 Since The Author wrote Cosmic Trigger a lot has changed as far as interpretations of Quantum Mechanics go, and there are now at least 13 competing (and perhaps commingling) interpretations currently.

Since he was apparently Bob’s primary source in the writing of Cosmic Trigger, I contacted Jack Sarfatti and asked him to bring us up to date on the information presented in this chapter. Bearing in mind that the following is Jack’s particular reality tunnel, it may perhaps be best to utilize this chapter as a historical view—if anyone has a well-written contemporary piece of similar intent and agnostic attitude, please let us know!

Herewith is my email interview of Sarfatti regarding the info in ERP and Bell’s Theorem:

CF: ERP “proves” that if Quantum Mechanics is “true” this requires instantaneous contact between some particles, even if at opposite ends of Universe.

JS: Not accurate. Back when it was written it was plausible, but no longer.
Quantum entanglement is very fragile, and for particles out in space, the initial entanglement will almost certainly be destroyed by collisions with other particles.
Even if it was not, it is of very little consequence since actual message using entanglement alone is not possible in quantum mechanics.

We now know through the work of Yakir Aharonov, Huw Price, Ken Wharton, and Rod Sutherland, that the only way to correctly understand quantum theory is through OBJECTIVE LOCALLY REAL RETROCAUSALITY in which future "destiny" causes post-determine what happens in the present in addition to the common sense past "history" causes. OBJECTIVE LOCAL RETROCAUSALITY is the only way to understand quantum entanglement without violating Einstein's special and general theories of relativity.
FASTER-THAN-LIGHT NONLOCALITY never happens directly. It is a mirage, the effect of OBJECTIVE LOCAL RETROCAUSALITY as probably first explained in the 1950s by O. Costa de Beauregard as the "zig-zag" also used by John Cramer in his "transactional interpretation." Indeed, so long as the entanglement is not destroyed by environmental decoherence, the statistical correlations do not depend on the space-time separation between the localized strong measurements on each particle in the entangled network.

Quantum uncertainty (e.g. Heisenberg) in the present is only because we must integrate over all possible future destiny causes. Therefore, our quantum theory using only past causes is incomplete as Einstein correctly thought. When one includes future destiny causes "God does not play dice with the universe." However, because quantum theory does not allow stand-alone quantum entanglement messaging, the usual Heisenberg uncertainties apply as a pragmatically useful effective description for simple scattering experiments on dead matter. This situation changes for those degrees of freedom responsible for life and consciousness in open complex systems with long-range quantum coherence (as first discussed by Herbert Frohlich). The situation changes for living matter, which is a POST-QUANTUM THEORY effect.

CF: If QM fails, then we have a Whole New Ball Game—I assume we are not at this juncture.

JS: Yes, we are. QM fails for living matter. We now have a Bohmian Pilot-Wave/Beable Post-Quantum-Theory PQM that explains living matter. It solves the "hard problem" of David Chalmers i.e. how our conscious "qualia" fit in with laws of physics and it opens up the door for new kinds of super-technology.

CF: If Objectivity fails we might have an Observer-Created World, which would allow for Psychokinesis, and/or Many World’s Model, which allows for Time Travel without paradox.

JS: No, the "observer-created world" is largely a fantasy. It's the same as believing in Santa Claus and the Tooth Fairy. One does not need to sacrifice objectivity to allow for psychokinesis, and time travel to the past without paradox. That is a wrong idea that was plausible in the 1970s when Bob wrote Cosmic Trigger, but no longer.

CF: If Locality fails we have Superluminal Information Transfer, which allows for ESP and Extra-Terrestrial Communication, and/or Synchronistic Acausal Connections, which is like a Jungian World.

JS: No, again this is muddled. There is never Superluminal Information Transfer SIT - that is Fool's Gold that we all bought for a long time. What we have is PQM OBJECTIVELY LOCALLY REAL RETROCAUSAL ENTANGLEMENT MESSAGING THAT ZIG-ZAGS IN SPACETIME AND WHICH IS MISTAKEN FOR SIT. It's AS IF there is SIT, but in fact it is BACK FROM THE FUTURE PQM messaging. 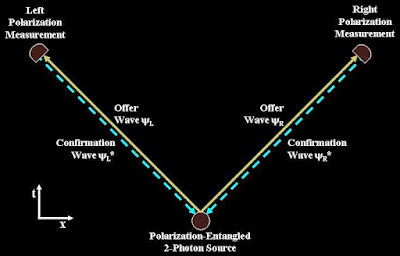 it's really BACK FROM THE FUTURE SPOOKY ACTION - that does not violate Einstein's relativity.

Bottom line—everything R A Wilson wrote over 40 years ago was how we thought back then, but no longer.
We have advanced significantly since then.

Other useful links are

If you would like to see how Jack writes when he is not trying to be simple, this is worth a look: https://www.linkedin.com/pulse/progress-post-quantum-theory-consciousness-augut-27-2016-sarfatti?articleId=7008179474198465064

If this subject is of particular interest to you I recommend How the Hippies Saved Physics, which is mentioned quite a few times right in this blog. Nick Herbert’s Quantum Tantra blog is also a good place to explore if you are interested in a contemporary gloss on this sort of thing, and his book Quantum Reality is still a good look at Quantum Mechanics from the more psychedelic POV, even if it is 30 years old. Jack Sarfatti is active on Facebook and has an active blog as well. [You can also follow @JackSarfatti on Twitter — The Management.]

Okay — that’s about it as far as the physics goes. If anyone has any interesting insights into this intellectually challenging area please share them with the group. Next week we change tack and look at the Leary 8-Circuit Model of Consciousness with Tunnel-Realities and Imprints (201).
on September 12, 2016

For a straight peoples' up to date view of what physicists think currently see ''The Big Picture: On the Origins of Life, Meaning, and the Universe Itself," by Sean Carroll (2016) http://tinyurl.com/hb9d27g

Neat post, this part of the book always makes me feel like a dunce. So, am I correct in gathering that Sarfatti is currently a logical positivist? (i.e. that there isn't much mystery to our reality) Not to be glib...I'll have to check out the article above.

This particular chapter appeared one of the most significant upon first reading because it offered possible explanations for starnge phenomena like prophecies, ESP, etc. I was raised with extreme skepticism, may father was a scientist, so I had problems accepting things like ESP until RAW tied it with quantum physics. It's very cool to have an update from Sarfatti, a prominent voice in this chapter, a sort of where are they now feature. I love Herbert's Quantum Reality and still refer to it at times. RAW recommended it the first time I attended one of his lectures.

Sarfatti sounds very sure when writing: "that the only way to correctly understand quantum theory is through OBJECTIVE LOCALLY REAL RETROCAUSALITY ." RAW sounds less sure in this chapter, maybe because he didn't get a physics degree. Sarfatti's explanation seems to bring us back to weirdnesses in Time. I'm still going with the Marx Brothers.

RAW accurately describes this scenario in the opening sentence of this section: physics = another perspective.

Oz--He who has a trusted map is always sure of his interpretation of the territory; he who has multiple maps is always in doubt!

Charles, thanks for the interview and for your continuing work on the reading group. I wonder why you consider Dr. Sarfatti Bob's primary source for the physics in Cosmic Trigger? Wilson certainly mentions Saul-Paul Sirag's comments more than those of any other physicist's. I agree with the commenters above that Dr. Sarfatti seems to have little interest in model agnosticism. I wonder what Saul-Paul Sirag thinks of his chart in CT today.

I've never looked deeper into QM than what was presented in RAW's books, but have wondered what breakthroughs have been made since Quantum Psychology was written. Thanks for giving an update on more recent speculation.

I traveled to Ohio to visit family this past weekend, and took time to hang out with an old friend. That morning I read this week's section. The parallel universes theory always fascinated me. Later that night my friend introduced me to the Mandela Effect. I remain very skeptical of the Mandela Effect, but thought it was a neat coincidance that I found myself in a conversation about parallel universes, time warps, and perceptions just hours after reading this summary of Quantum Mechanics.

Retrocausality as a means of explaining particle entanglement without violating relativity makes my think-meat hurt.

As a PBS article explained,
"It’s like sending a letter back in time to a friend—you send it, but even before you’ve gotten to the post office, she already knows the secret message inside because, at one point, you were roommates."

Tramping about, a professor stumbles over RAW and znore