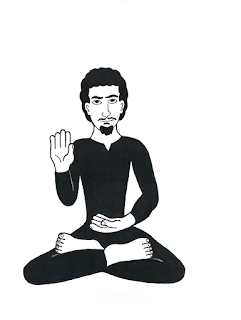 I’m not up to doing a blow by blow commentary on this chapter, the prospect is too daunting. As Bobby Campbell said when we began the reading group “a shocking amount of the most virulent RAW quotes come from Sigismundo's wilderness journal.” There’s a lot herein and much of it is best contemplated upon- preferably, in some sort of silence.

“I found that my long abstinence from magical practices had injured my powers. I resumed elementary drill and soon got back to my old form. For one thing, my protection against mosquitoes had worn off. I spent a night motionless, offering my body to them and concentrating on the thought that they were equally divine with myself. I forced myself to love them, so that in union with them the apparent differences between us might vanish in   ecstasy. I compelled my body to accept, to welcome and even to long for their bites, as being acts of love whereby I nourished their lives. In the morning, though badly bitten all over, there was no inflammation whatever; and from that time on they never bit me at all.

I soon recovered the powers of Pratyahara and Dharana. My mind became still; the impact of impressions ceased to obsess me, I became free of the illusion of the reality of material things. All events became equally indifferent, exquisite phrases in an eternal symphony. (Imagine listening to Beethoven with the prepossession that C is a good note and F a bad one; yet this is exactly the stand point from which all uninitiates contemplate the universe. Obviously, they miss the music.)”

The Confessions of Aleister Crowley
From Eric Wagner: "This seems good for the solstice." https://www.youtube.com/watch?v=KY1p-FmjT1M&feature=youtu.be
on June 15, 2020

I hope everyone has a nice Bloomsday tomorrow.

@Tom, Nietzsche got known for his aphorisms and for communicating that way, innovative for Western philosophy.

The following had been intended for last week, but I ran out of time. It sets up, a little bit, this week's Wilderness Journal.

p.76: the headline: "Neopolitan Musician Seeks Rest and Solitude" adds up to 411 by Notarikon. We encountered this number, and I commented before, with the last sentence of Chapter 4, also adding to 411 and also referring to Sigismundo. 411 = "Fundamenta Terrae" also = "Habitaculum"; further elaboration in Chapter 4's comments.

Of all the short biographical notes in Chapter 6, Sigismundo appears the only character with astrological signs given. RAW famously didn't care much for astrology, one area I also know little about preferring to rely on the Tarot for astrological indicators. " ... moon in Leo, Gemini rising" reminds me of Seamus Muadhen (James Moon) and that the two characters appear twins of sorts.

The twins Seamus and Sigismundo, one outgoing and actively involved in the Revolutionary War, the other in a wilderness retreat, what Crowley called a magical retirement, recalls the twins that make up Horus, the deity in charge of the present aeon according to many Thelemites. According to AC's mythological reckoning, Horus comprises two gods, Ra Hoor Khuit, active and outgoing represented in posture by the Sign of the Enterer, projecting force, and Hoor Pa Kraat with the Sign of Silence.

I love the descriptions of composers in this chapter. J.C. Bach as "black opium in a lush and expensive brothel" always made me want to check out his music, and I am actively doing that this week.

Mozart as "the planets revolving in Newtonian orbits, while children play and birds sing" capture his sense of logic and light musical touch, while J.S. Bach as "a naked goddess, a compass, a mason's square" speaks to both his earthiness and his profundity. (I recently discovered a great J.S. Bach album, Hilary Hahn playing Bach partitas for solo violin.)

Eric, I hope you had a Happy Bloomsday as well. My old best friend and I used to make buffalo chicken dip on Booomsday. I regret I didn't make the chickpea version this year. Maybe tomorrow. I hate I emerged out of Mom a day late to be born on June 16.

Oz, Thank you- I can't claim credit for sequestering the quote. The aforementioned fried sent it to me in a moment of existential crisis. I thought it fit perfectly.

Great observation about the dualism between Horus/our protagonists.

Tom, I always thought Voltaire was the best aphorist, which is fitting for our group. I agree that the naked woman, the square and compass are a symbol of earth. V.I.T.R.I.O.L.

I have not read any of this trilogy, but reading this post makes me want to. Do they need to be read in order, or could I jump right into Nature's God?

@Unknown You should probably read all three in order. They're all their own book but you'll appreciate the developments in Nature's God more if you've followed the characters and history. The Wilderness Diary is a collection of aphorisms that you can easily dip into, but you'll catch more of what Sigismundo is musing about by reading in order.

While our book groups are made to savor the novels, the first time I read them I zipped through them. They are page turners.

p.119: The musings about "types of idiots recalls Gurdjieff's famous "toasts to the idiots" ritual he would have at his Paris apartment in the final years of his life. Gurdjieff's different idiots represented different types. One exegete or another said the original meaning of idiot indicated someone who acted true to their nature without regard for convention.

The paragraph about Maria that follows seems important for illustrating how to practically engage with that archetype: "... even though the real woman of that name is fourteen years older than the myth." RAW keeps the connection between the two alive despite their separation in space and time, the point being, perhaps, that love can continue and thrive beyond physical limitations.

p. 120; "Painting and Berlin will never be quite so important to me – but they are nonpareils to painters and Berliners." Googling "nonpareils" reveals them as a confectionary chocolate candy. However, nonpareil = French for "without equal" which makes sense in the sentence. Nonpareils = 456 = Paries, Latin for "the wall." Berlin had a famous wall that came down not long before the writing of Nature's God. Painting has been used as a metaphor for theurgic activity. "Painting and Berlin..." = 83 by Notarikon. See the "List of Primes" in 777 to see how that might apply to helping to bring down a wall like that. The phrase up to the dash = 360, another indicator if you look it up, also 360 = 36 x 10 or 6 x 6 x 10. This also reminds me of RAW's book The Walls Come Tumbling Down.

Largely seems like RAW is playing as Nietzsche, ie, the mask tell, and comes off as tedious in this chapter.

p. 122: I suddenly understand why my autokinoton has never worked. What I need to do is simply to create controlled explosions. Strange that it took me so long to see this. I knew that about my music all along."

The way he puts it lets us know that "controlled explosions" represents a generalized principle applicable to both physics and spirit. His music suggests his spiritual expression. Controlled explosions as a metaphor gets greatly expanded and elaborated in Pynchon's Against the Day (2006), a book I think shows influence from RAW in other ways.

From the pov of theurgic magick:
autokinoton = auto+kinot+on
auto = 86 discussed earlier; also, the obvious meaning that you do this yourself, you don't rely on a priest or any other intermediary to do it for you.
kinot = 159. Also discussed earlier, I believe. When you look it up, besides two meanings, it connects with 934. Looking up that number and translating the Latin will show what one can aim for in this art.
on = the ON formula = the how to go about doing this.

controlled = 476 = Latin terms basically translating as "lawful"
Lawful explosions. The law in this case refers to: 'Do what thou wilt shall be the whole of the law. Love is the law, love under will.

The last aphorism on p. 122 that starts: "I watch the ducks in the pond ..." seems an apt comment about social media.

With various past comments relating these Historical Illuminatus Chronicles to current events in mind, I was startled to see the mention of our current nightmare year: "By 2020, autokinotons may even fly to the moon."
"By 2020" = 42 = Terror, calamity and a few other obvious indicators pointing to the current chaos.
"autokinotons may even fly to the mood" = 110, the spirit of typical RAW optimism; positive energy as the final secret of the Illuminati.
110 = Father of Faith
= Angel of the 6 of Wands called "Victory" in the Thoth Tarot.
= Kinsman