From 1981 until his death in 1994, however, Shea was a successful writer of historical novels, including All Things Are Lights, a personal favorite of mine that I've described as a "thematic prequel" to Illuminatus! All of his books are worth reading.

Recently, while researching Shea for an upcoming project, I discovered that many of his titles have become available as free ebooks. His son and literary executor, Michael E. Shea, has been more interested in keeping his father's works and ideas alive than in trying to squeeze out the last bit of book royalties.

Here's a guide to what's available as free ebooks. Many of these books also can be purchased as modestly priced used books. 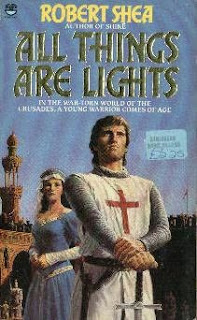 All Things Are Lights

Set in the 12th century, All Things Are Lights is about a knight and troubadour named Roland. He gets himself into many adventures, including participating rather against his well in Crusades against the Cathars in southern France and the Muslims of Egypt, and also has a complicated love life.

As I've implied, All Things Are Lights can be read as a straightforward action novel. But as I wrote earlier, "there is rather more material than I expected about secret societies and secret occult teachings. The Templars and Cathars feature prominently in the book, and Gnosticism, paganism, sexual tantra and the Assassins also are referenced. The book's hero, Roland de Vency, has a skeptical attitude toward authority and an agnostic attitude toward religions."

Simon Moon in Illuminatus! explains Shea's title: ""An Irish Illuminatus of the ninth century, Scotus Ergina, put it very simply— in five words, of course —when he said Omnia quia sunt, lumina sunt:
'All things that are, are lights.' "

I've read quite a few historical novels, and All Things Are Lights is one of my favorites. You can download it as an HTML file, which formats nicely on a Kindle ebook reader. The opening of the book draws you in. 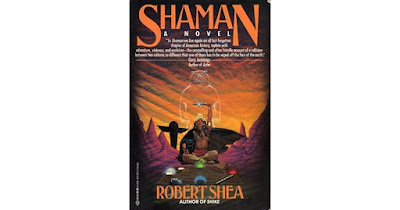 A frontier novel that focuses on Native Americans. Available as a free download in Various formats from Project Gutenberg. 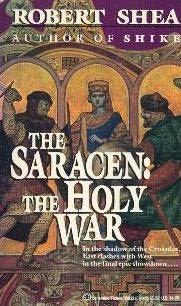 Saracen: Land of the Infidel and its sequel Saracen: The Holy War

The son of the main characters in All Things Are Lights is one of the characters in these two related novels. Available as free ebooks at Project Gutenberg. 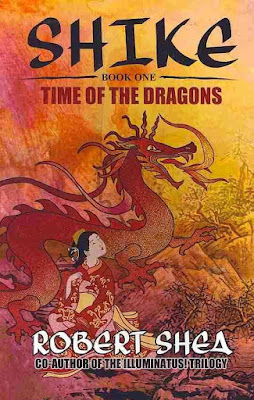 Shike: Time of the Dragons and Shike: Last of the Zinja

The two Shike books are available for purchase as Kindle ebooks. The reviews on Amazon complaint that there is text missing from Shike: Time of the Dragons. I called this to Mike Shea's attention and he promised to look into it.  He is unhappy with the publisher and will fix the situation in May, when he can reclaim the Kindle rights.

Although it isn't publicized on BobShea.net, the Wikipedia article on the Shike books has a link to a Creative Commons version of the two books.

I asked Mike Shea about his plans for the book. It won't be available in the near future because it would require considerable work to get it ready for publication.