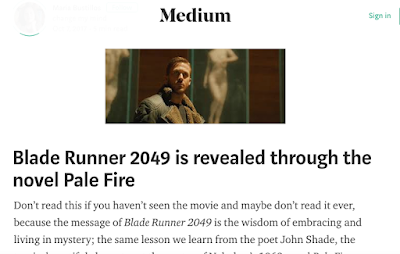 Wait, what? Apparently this is real.

Line 130: As the New Zealander Brian Boyd remarks, the  discussion by Kinbote of the line in the poem "I never bounced a ball or swung a bat," in which the commentator remarks that he also was not good at soccer or cricket, is hilariously inept; an American poet would be referring to PQ's preoccupations, basketball and baseball. Kinbote cannot help making every passage about himself.  Contrast with Kinbote's fine discussion of lines 131-132 before he wanders again into his own concerns.

"The death of Oleg at fifteen, in a toboggan accident," the theme of the sudden death of all of Kinbote's close friends and relatives continues. But the trip through the passage that reminds Kinbote of Oleg is a kind of rebirth -- he is "born again" in the new world, and escapes the fate of the Romanovs after the Russian revolution.

I am curious what Oz will make of this section about a long underground passage. Boyd's book about the novel points to the repeated references to the color green, the number 1,888 mentioned twice, and the references to actress Iris Acht -- Acht is "eight" in German.

Line 137: A "lemniscate" is a figure eight curve (more here). See illustration, above, from Wikipedia, of the "Lemniscate of Bernouli." A bicycle's tires, as Shade's poem states, could leave a similar impression upon wet sand, so Kinbote's remark that the phrase "has no real meaning" is another failure by the commentator.

Note: Readers are still posting comments to the earlier weeks of the online reading group. See for example, PQ's new comments for the first and second weeks (handy links at top right). The connection between Pale Fire and Blade Runner 2049 (comment to Week Two) was certainly news to me.
on February 12, 2018

The lemniscations in the text seem to me to do with the concern for life after death. The math figure for "infinity" is basically this shape.

The shape also looks like wings of a sort, though not butterfly wings.

I often associate 8 with Mercury, the trickster god of communication in his guise as messenger of the gods. Mercury also has the function of psychopomp like he's described on p. 133 of my edition.

Iris Acht's name holds great gnostic interest. Iris suggests eye. The Hebrew letter "Ayin" translates to "eye." The English letter corresponding to Ayin = O. When you place this O after Iris' initials you get IAO, a gnostic name for the supreme deity. In Golden Dawn magic IAO gets connected with the death/rebirth cycle (Isis, Apophis, Osiris). Acht = 8 = communication so Iris' name, to me, symbolizes the communication of the death/rebirth archetype. In both instances where we first hear of Iris (p. 122 and 123) we see mention of a door. Esoteric science holds that, in one sense, whenever you go through a door you experience a small, usually unnoticed, death/rebirth. In the second instance, the King soon recalls the secret passage where he will take rebirth as a free man after his escape. Death/rebirth is alluded to on the next page (124): "...(the gift of a foreign potentate who had recently been assassinated) which had amused Oleg and him during a previous Easter."

The clockwork toy, which perhaps triggered Shade's first youthful fit, is a connection to a dead relative and a foreshadowing of the person spied in the final line of the poem, a harbinger of his death. Are we to now think that this fit was perhaps a premonition?

Is it a literal key that Kimbote has which will make the figure work again? Or was some other meaning intended? The publishing of this book, the possession of the poem?

What are we to make of the King's scarlet clothes? Is it looking too hard to see this as an echo of the crimson features of the butterfly also spotted at the end of the poem?

It's likely meaningful too that the King has so many doubles flitting around... even beyond the obvious that Kimbote seems to an army of doubles in himself.

I'm all questions and no answers.

Vladimir Vladimirovich, Petar Petrovich, Alexandar Alexandrovich - when the last name is created by the first name in Slavic languages/culture it usually refers to "xy" person; it's a "for example name" and it has funny sound to it. (Try pronouncing it loudly.)

At first, I laughed at Vladimir Vladimirovich - Nabokov, and now he will have some 239 pages long laughter at me as I am trying to meander through this enigmatic book. It seems to me Nabokov experiments with his readers by "a weird forms of trickery".

Toward the end of the commentary for line 130 Nabokov writes about the artist: "Eystein showed himself to be a prodigious master of the trompe l'oeil in the depiction of various objects surrounding his dignified dead models and making them look even deader by contrast to the fallen petal or the polished panel that he rendered with such love and skill." Nabokov uses Norwegian last name Eystein alluding to, in my view, to Einstein. Just a few lines below Nabokov touches on "relativity of reality" without using word "relativity": "...but the basic fact that 'reality' is neither the subject nor the object of true art which creates its own special reality having nothing to do with the average 'reality' perceived by the communal eye."

Of course, Nabokov's thoughts associated me with RAW's Email to the Universe chapter: The Relativity of 'Reality' "Every tribe has its own "reality - map", or worldview, or weltanschauung."

The two journeys through the escape passage implies a few different things - voyaging through the bardo, diving into the subconscious mind, crossing the Abyss. "A remembered spread of colored sand," and the Egyptian child (p.133) suggests the symbolic desert of the Abyss. The first path on the Tree of Life after crossing the Abyss = Daleth. Daleth = door and corresponds with Venus as does the color green: "The last bend of the passage, ending in the green door ..."

p. 117 - 118 - "I am a passable horseman, a vigorous though unorthodox skier, a good skater, a tricky wrestler, and an enthusiastic rock climber." Aleister Crowley was also an enthusiastic rock climber setting world records in his time. Spiritually you could call him a "horseman" - horse = horus. "Passable" seems an interesting pun in that regard. This reminds me of the description of Sherlock Holmes (p.78) as "hawk-nosed" i.e. hawk knows; hawk = horus

The description of lemniscate: "A unicursal bicircular quartic...," reminds me of Crowley's unicursal hexagram probably because that's my only other instance of encountering the word "unicursal." The unicursal hexagram has congruence with infinity. Kinbote dismissing the lemniscate phrase as having no real meaning seems another example of opposites or reversal of meaning from the original intention.

As Oz Fritz has stated, Pale Fire has a Bardo-esque nature to it. I think we can safely say that this can translate to a sort of Chapel Perilous feel as well. In Antero Allis book The 8-Circuit Brain he has a chapter dedicated to Chapel Perilous where he gives exercises for the reader to try and embody the feel of The Chapel. One of the exercises includes watching films that embody the feeling of Chapel Perilous, and can you guess which film appears on the list ? If you guessed Blade Runner then go ahead and give yourself a little pat on the back.

Tom, your mention of baseball reminded me of Line 98 and Kinbote’s commentary.

I was impressed at Shade’s working this bit into the poem. Then Kinbote’s commentary added to a growing suspicion that he’s been butchering the meaning behind many of Shade’s lines. Kinbote speculates that the printer made a misprint here and transposed the title of Keats’ poem “On First Looking into Chapman’s Homer” with “the account of a sports event.” Feels more likely that the significance of a baseball headline is lost on Kinbote.


Anyone else finding Kinbote increasingly irritating?

The more I read the commentary the more I get this sense of him smothering and strangling the beauty and meaning out of Shade's poem. I find him extremely annoying, yet I'm impressed at Nabokov's orchestrating of it all.

The secret passage discovered in the note to line 130 makes me think of how the notes refer to other parts of the notes, forming secret passages from one note to another. I used to love the Universal horror films with their secret passage ways to hidden laboratories.

I wonder about the significance of “Timon of Athens”. This note has a Timon Avenue and the play comes up over and over again.

The clockwork toy of line 143 makes me think of “A Clockwork Orange”.

Joshua, I agree that Chapel Perilous feels like a bardo space. In the early 90's I ran a film discussion group called the Sufi Movie Club dedicated to esoteric informing films. "Blade Runner" was the first film viewed and discussed in that series. I didn't see "Blade Runner" for a long time because I was working for the band Blade Runner, named after the film, and I had little appreciation for much of their music. I wrongly assumed that I wouldn't like the film, but quite the opposite occurred.

Coincidentally, my friend Timin paid me a suprise visit last week after not seeing him for about 5 years though he is "Timin of Chico," not Athens.

On p. 129 the King is telling Odon about the secret passage closing the paragraph with the sentence: "Definitely out of the Palace." The next paragraph begins: "Anyway Odon had to leave in a few moments, being due to act that night in "The Merman..."

Merman suggests the Hanged Man of the tarot while also alluding to the gender reversal theme. Hanged Man = Mem = the element Water = key 23 in Crowley's "777." Chapter 23 from the "Book of Lies" examines the formula OUT instructing the student to GET OUT which is what the King wants to do. The Hanged Man is associated with stage 13 in Leary's system, the first stage of the extraterrestrial circuits getting out from the habits and programming of the terrestrial circuits.

This sentence from p. 133 occurs just as the King reaches then end of the secret passage. It strongly suggests reincarnation, to me:

"A remembered spread of colored sand bore the thirty-tear-old patterned imprint of Oleg's shoe as immortal as the tracks of an Egyptian child's tame gazzelle made thirty centuries ago on blue Nilotic bricks drying in the sun."

The next sentence is the one quoted above where the King encounters the statue of Mercury as psychopomp. There may be other reasons for using 30 twice, but 30 = Resh = The Sun (tarot).

I think Resh = 200... 30 = Lamed = Libra. Is Nabokov known to play kaballistic games? The earlier post referencing where 9 and 6 were mentioned with heliotropes did make me wonder, but I'm not convinced. The King dressed in scarlet probably means something... if he were a woman in scarlet that would be more obvious, but Kimbote does have a gender reversal theme as you've mentioned. Kimbote= Babalon?

The key number for Resh in 777 is 30. The key number is to the left in all the tables of correspondences. That's different than the value of the letter which is 200. I don't know if the qabala is intentional on Nabakov's part.

Oh yeah, sorry. Resh is the 30th path on the tree. I didn't think of that. From moon to mercury.