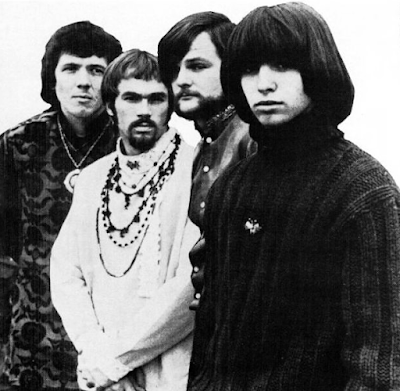 Eric Wagner once asked Robert Anton Wilson to write down his 10 favorite musical recordings. He couldn't lay hands on it when I asked to see it, but Michael Johnson tracked down his copy, so sharing it with you is a team effort.

I did not know there were recordings available of Scott Joplin's music on harpsichord; that sounds interesting.  I wish I could ask RAW what his favorite Mozart piano concertos were; I like #20, #21 and #24. I like Beethoven's Seventh Symphony a lot.

I'm going to say that Iron Butterfly is the surprise on this list.

In Trajectories #12, Spring 1993, RAW mentions how great Gould's Goldberg Variations sounded as used in Silence of the Lambs.

In notes for MLA Sept/Oct 2004 someone asked RAW about his favorite music and he listed Beethoven's 9th, the Emperor Concerto, Four Seasons and Goldberg Variations.

In the Dr. Jeffrey Eliot interview: jazz as American contribution to world music: "I think the Modern Jazz Quartet will some day be looked back at in the same way we look back at Vivaldi."

In Chaos and Beyone, p.166 RAW mentions listening to Bach and Ravel while testing out mind machines.

I asked him if he listens to his favorite music when he writes, and he said he'll have on the "light classical" station that he got through his TV package, but that his favorite stuff is too engrossing; it compels him to quit writing and listen.

In TSOG, RAW quotes Nietzsche: "How good bad music and bad reasons sound when one marches against the enemy!" - Dawn, 1881

There's a lot more, or course. I think RAW's most articulate writing on music in in the Historical Illuminatus Trilogy, and I really love his phenomenological approach, almost always Siggy's nervous system speaking to us.

Also, as you both know, there are a handful of lines scattered throughout his books on jazz and pot. In addition to MJQ, he's mentioned Bird and Monk.

In Masks, p.108, use of "voodoo drums" adds to tone of Sir John Babcock's paranoid state, and I always think this bit was related to a film both RAW and I love: I Walked With A Zombie.

When Bob gave a talk in Phoenix in 1988 he came to my house for our Thursday Finnegans Wake reading group. He asked me to play Beethoven's Emperor Concerto and then Beethoven's Triple Concerto, but at the time I didn't have a CD of the Triple Concerto. Then for a change of pace he asked me to put on the Goldberg Variations. Over at rawilsonfans they have a list I asked Bob to make of his ten favorite CD's.

I heard him talk more about Beethoven than any other artist. He did like jazz but was curious about anything that might tickle his senses. We regularly gave Bob our new Starseed CDs, and I know he liked it when I brought my sitar and Marlis brought her tamboura over to his house. I don’t know how much he listened to our CDs, but he did write a wonderful near-Haiku about our peculiar sound,

"This music - intricate yet melodic as Bach,
austere as a Zen shrine, sensory as a massage
- seems like aural eroticism to me."

In the piece "Credo," in Right Where You Are Sitting Now, Wilson writes, "I believe in Bach, the creator of heaven and earth, and in Mozart, his only begotten son, and in Beethoven the mediator and comforter; and inasmuch as their gods have manifested also in Vivaldi and Ravel and Stravinsky and many another, I  believe in the communion of saints, the forgiveness of error and mind everlasting."
on September 01, 2016

Listen to the MJQ's CD "Fontessa" to hear what RAW meant. Their recording of the soundtrack for the film "One Never Knows" is a close second. While there are many fine versions of LvB's 9th, Furtwangler's wartime mono recording has always seemed to me the most powerful.

I love that recording of the Ninth!

Somewhere he also mentions his love of Scarlatti sonatas.

"For years I thought the Goldberg Variations were something Mr. and Mrs. Goldberg tried on their wedding night." ~Woody Allen

p.66:
"I like peace, quiet afternoons, the prose of James Joyce, chess, and listening to the sonatas of Scarlatti while stoned on marijuana."

pp.193-195, "Choose Your Hallucinations," has some wonderful commentary on pot and music. He mentions Charlie Parker, Beethoven, and...

"Now I found that marijuana definitely enriches the sensory-sensual manifold. I not only saw more colors, and more beauty generally, but I also found that I heard music better, including the more complex forms of progressive jazz and the more intricate baroque composers such as Scarlatti."

I've stolen the Woody line many times. As soon as the name "Glenn Gould" comes up in conversation, I'm stealthily waiting for just the right time to drop that line in. Sometimes I attribute it to Woody. (It really IS his line, of course.)

Gould's first Columbia recording of the Goldbergs was a classic, since it freed classical music of its supposed "seriousness" and made it sheer play. But there have been better recordings since: for instance Ekaterina Derzhavina's http://tinyurl.com/z4ofrqp