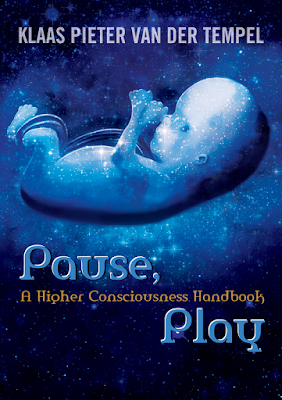 A couple of years ago, a couple of the usual suspects pointed me to a Dutch-Canadian "philosopher and mystic," Klaas Pieter van der Tempel, who maintains a High Programming website.

Eventually, I got around to reading Klaas Pieter's Higher Consciousness Handbook, essentially a collection of different ways to alter  your reality. As he explains in the interview below, he went looking for such a book on the Internet, could not find it, and decided to write it himself.

"I decided to write things out for myself: a compendium of the many techniques, tricks, and disciplines I had learned or come up with during those first four, post-psychedelic years, to alter my own state of consciousness," he says. "In that sense the book was me writing to myself, encoding the simplest wake-up calls to wake myself up on a daily basis, with or without psychedelics. To get high every day, at work, on the train, in the supermarket, just by using my brain."

Klaas Pieter put out the book himself and also made it available for download. I found it and enjoyed reading it, and wondered if other people would like it. Klaas Pieter isn't very active with social media and on the Internet, and I thought it was a shame that only a relatively few people would have a chance to find out about the book, much less read it.

I've tried to fix that by publishing an inexpensive ($2.99) ebook edition for Amazon Kindle, in collaboration with my publishing partner Gary Acord. You don't have to have a Kindle tablet to read it, just a free Amazon app for your web browser, smartphone or tablet.  In fact, I've put a copy on my smartphone, so that when I have a spare moment I can re-read the entries and practice the recommendations. (You can also buy the collection of antiwar essays by Randolph Bourne that Gary and I put out for 99 cents.)

And with that commercial announcement out of the way, here is my interview with Klaas Pieter, to introduce him and his book to you.

RAWILLUMINATION: Can you say something about what you were trying to do with your book? Who do you think will find it useful?

KP van der Tempel: "Pause, Play" was written four years after I'd had my first mind-shattering experiences with psilocybin mushrooms. Those experiences were so powerful, and so alien, that I looked all over for people who could relate to what I'd been through. I suppose I was looking for confirmation that I wasn't insane for having unlocked the realms of higher consciousness, and that I wasn't alone. There was plenty of information online about how to use psychedelics, and even more about enlightenment, illumination, and so on, but it was all so fragmented and replete with all kinds of dogmas and religious moral values that I was kind of put off by it. The result was that I decided to write things out for myself: a compendium of the many techniques, tricks, and disciplines I had learned or come up with during those first four, post-psychedelic years, to alter my own state of consciousness.

In that sense the book was me writing to myself, encoding the simplest wake-up calls to wake myself up on a daily basis, with or without psychedelics. To get high every day, at work, on the train, in the supermarket, just by using my brain. And then to use that high for fun, creativity, transformation, love, and above all for an active participation in the co-creation of my reality tunnel.

The book was intended for anyone like myself who has experienced higher consciousness and wants to integrate into their daily life. To live not just as a human, but as (a) god or as the trickster. And of course, anyone who has read RAW will quickly see how much he's influenced my writing — hopefully for the better. For those who want to dig deeper, my master's thesis provides a background for "Pause, Play" by comparing the works of RAW, Joseph Campbell, Leary and others. It's available online, and it's called "How To Go Out of Your Mind And Come Back Again." Somehow I managed to graduate with it even though my professors hated it. They just wanted to get rid of me.

RAWILLUMINATION: Your writings show that you obviously were influenced by Robert Anton Wilson and Timothy Leary. Can you say something about how you encountered their writings, and how they influenced you?

KP van der Tempel: I "met" RAW on the internet, I'm sad to say, only a few months before he died in 2007. At first, my interest in him was because of his conspiracy talks. One of my earliest reactions to taking psychedelics was an increase in paranoia; I figured that if I could discover these incredible insights into reality, language, and power, then somebody (or some group of people) must have done the same a long time ago. They must have started a secret club and initiated followers.. gained power in society.. and honed their skills and extended their influence over the millennia. And so I ended up deep inside conspiracy territory. Bloodlines, reptilians, Rockefellers, the works. And somewhere in this world of fear and control I saw a quote that said that there was this guy, Robert Anton Wilson, who was the King of Conspiracy Theory. I had to check it out. And thank jah I did, because he helped me pull myself right out of that shithole. I read Illuminatus! first; then Cosmic Trigger, and then every other book, article, and online video I could get my hands on. I wrote a RAW reference bible, for personal use, and started incorporating his ideas into all my academic papers. Bought a ring with a little swirly thing on it, grew a goatee and a potbelly... Just kidding. I guess you could say that he became the grandfather I never had; a wise teacher, hilarious, and weird. I wish I'd had the chance to meet him.

Of course RAW put me on to Timothy Leary, through the Eight Circuit Model of Consciousness that they'd worked on together. Leary is still such a controversial character, and so many people think he was a buffoon. But there would be no RAW without Leary. And I'm glad to keep the legacy of their ideas alive. Leary said somewhere that he considered himself the reincarnation of every great author he'd ever read. Their ideas became his ideas, shaped him, determined his behavior. And now I'm one of the many reincarnations of Tim and Bob. Spaghetti!

RAWILLUMINATION: Could you tell my readers a little bit about yourself? You are a Dutch scholar and teacher, but you also are something of a citizen of the world.

KP van der Tempel: People sometimes tell me that I'm good at thinking, and I've recently been told I have an important brain because I'm good at asking questions. I think that last bit is right: asking questions is pretty much the only skill I've developed any expertise in. For the rest I'm kind of an intellectual idiot with two left hands.

Genetically, I'm fully Dutch, or rather Frisian, which is a distinct ethnic group in the Netherlands that predates the Dutch. But my mother emigrated to Vancouver, Canada, right after she was born after the war, so even though I was born in the Netherlands I have two nationalities. My father is a diplomat, which means I grew up all over the globe; we spent four years in one country, then moved to the next, and the next, and the next. I went to middle school in Chile, high school in Washington, D.C., college in Toronto, and university in Utrecht. We just upped and left everything behind over and over again. I'm sure it's scarred me in some ways. But it's also taught me many different perspectives and made me a cultural relativist before I ever read RAW. That's not to say that I get black people and their social plight in America; or that I know what it's like to be a poor fisherman in Sri Lanka. But I do get that I don't get it, and don't make assumptions about why other people think or behave the way they do. Not even about Donald Trump.

Being a diplomat's kid also got me into some pretty elite schools and communities, along with the children of politicians, CEO's, bankers, and what not. I even dabbled in a secret society in college, but I quit that. All along, as a voracious reader with an analytical mind, I kept looking for answers to the big questions in life. I was raised a Christian, but when I started asking questions in Bible study about all the strange contradictions in the great book I quit that too. I'm allergic to bullshit. That's probably why I got into philosophy and anthropology. I wanted to really understand reality, truth, and how other people understand it and express it. There is such an endless supply of opinions about reality out there, so many great books other than the one great book; but none of them satisfied my questions. It just seemed like an endless stream of bs. Or at least, that's how I used to think before psychedelics. I was an absolute nihilist and I dreaded life amongst the civilized apes. And then I changed. There's a Hallmark quote coming up here, I can feel it: something about how RAW, drugs, and philosophy saved my brain. Or as Leary put it, I went out of my mind to come to my senses. And now I work at an engineering university in the Netherlands, corrupting the youth, or at least the ones who dare cross paths with a young bearded mystic who babbles on about Satan, drugs, E-Prime, and synchronicity. And it keeps me happy.
on December 22, 2015

RAW was not an anti-vaxxer, his daughter says