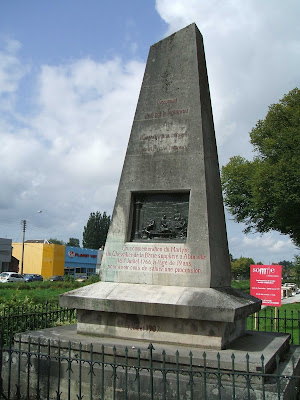 This week, please read Page 229 (Tomorrow we take the coach southward, back toward Napoli") to Page 245 ("The lights of the city came closer.")

This is an interesting section. One reads about the worst of humanity in the horrible execution of the French nobleman, and the best, in the selfless efforts to rescue the young man who threw himself into the Bay of Naples.

I had assumed the execution of François-Jean Lefebvre de la Barre was something Wilson had just made up to dramatize the cruelty of the old regime, but in fact the account is based on a real execution of a nobleman of that name on July 1, 1766. Wilson's account apparently is largely correct although the real la Barre was only 20 when he died. According to the Wikipedia article, the prosecution was secular (albeit for impiety) and the church hierarchy tried to obtain a pardon for la Barre.

Saudi Arabia recently carried out a mass execution of 37 by beheading. Nearly all were members of the Shia religious minority and the "evidence" was largely obtained by torture.
on May 13, 2019

Toward the bottom of p. 243, the paragraph that begins with, "You wrestled with a professional assassin ..." catalogs most of the times Sigismundo confronted death. It only leaves out the trick Drake and the Freemasons pulled on him when he thought he might die and the execution he witnessed in France when he pictured himself in the same situation one day. He's confronting death once again when he has those thoughts. This time he voluntarily trying to defeat it by rescuing his cousin. He calls up "real courage" to aid him.

Sigismundo and Carlo, ostensibly enemies from their family feud, bond over their effort to rescue Tony. The last sentence in this week's section when S. and C. are going back to shore - "The lights of the city came closer" seems both literal and figurative.

The description of S's diving efforts on p. 242 reminded me a little of H.P. Lovecraft.

I knew the name Hans Zoesser sounded familiar, I thought perhaps he was a minor figure in the Bavarian Illuminati but it turns out I had read the name before in Cosmic Trigger where RAW says that it was a name given to him by a psychic as one of his past incarnations. This makes the descriptions of Zoesser a funny gauge of how RAW might have seen himself had he lived during these times. It also gives RAW a chance for some self deprecation as he depicts his former self as a lawyer, Wilson was no friend of that profession, a "fat Bavarian," and someone with a "penchant for florid sarcasm."

On pg.236 we hear the bells of the town through Sigismundo's ears: "I am the Iron God of Death- Kill, Kill, Kill." Even if you're not a fan of the show I'm sure you've at least glanced at a headline concerning this week's Game of Thrones, "The Bells," where Daenerys goes full "Mad Queen" after being triggered by the sound of ringing bells and commits a big ole war crime. Perhaps she was hearing the same thing. On the next page Sigismundo tries to clamp down on his emotional conjectures in the aftermath of the execution: "I must not become a fanatic." This also ties into Daenerys' arc in the final season of the show- many viewers seemed to think her decision was out of character, but for anyone who has been paying attention to her dialogue, when she says things about overturning the old order and how she's the savior everyone needs, could have seen her massacre coming. It's never a good thing when revolutionaries begin to get sucked into their megalomania.

Speaking of fanaticism my initial comment about the innkeeper on pg 236 was that he would certainly have a red ball cap on if the series was set in today's society. The innkeeper is my least favorite character in the book so far. At least Peppino had some sort of reasoning aside from abject ignorance and xenophobia.

On pg. 239 Uncle Pietro gives a small bit of advice about feeling compassion for those who fall victim to their own conspiracy theories. This reminded me of the "incel" community online which uses a closed feedback group to assure themselves the reason they're lonely is because of a vast system of emasculation and feminine empowerment. Many of them are suicidal or talk about ending it all pretty often. It sucks because I can see how miserable they are, no young monkey wants to be alone.

Before diving Sigismundo reflects that "Dante had turned them (suicides) into trees" on pg 240. I really like the wording here since it clearly indicates that Dante had created that vision of Hell instead of any Biblical or "divine" source. Reminded me of Alice Turner's History of Hell which chronicles the evolution of the imaginary place from its scant, scattered, and not-really-related-to-the-modern-conception-of-Hell Biblical sources into the solid idea we have today.

Oz- I kept trying to think of a time Lovecraft had tried to save someone from drowning after I read your comment before I realized you were talking about the stygian waters and critters therein as the Lovecraftian element. I thought my misconception was funny.

I used to play with the notion that I had lived as Eve Weishaupt in a previous lifetime.