My interview with Ian 'Cat' Vincent 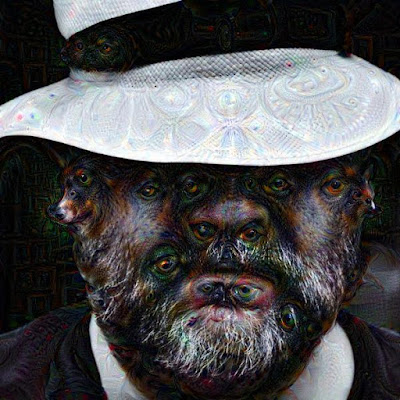 I am pleased to present an interview with Ian "Cat" Vincent, a British mage, writer and student of Robert Anton Wilson. Here, Cat holds forth of RAW, Festival 23, Brexit and other subjects. And there's news — Festival 23 will return in two years!

Cat sent me his official bio, but a couple of additional notes: If you like this interview, please see the very interesting one with Dubious Monk; I tried to avoid overlap with it. Trivia about Mr. Vincent (from the Internet Movie Database): "Was the basis of the character 'Romanov' in Diana Wynne Jones' novel 'The Merlin Conspiracy' (2003)."

And now we hear from the man himself:

Ian "Cat" Vincent is a lifelong student of the occult, and a former paranormal protection consultant.

In recent years he has turned his attention to Fortean journalism, with a focus on examining the rise of "hyper­rea"' (fiction­-inspired) belief systems and other pop­ culture manifestations of the occult. He was one of the earliest journalists to write in depth on the Slenderman phenomenon.

His writing has appeared in Fortean Times, the American college text Apocalyptic Imaginary, a monthly column at Spiral Nature and the Darklore anthologies, and he is a a contributing editor at The Daily Grail.

He has lectured on subjects including Slenderman, the life and works of Robert Anton Wilson, the fictional roots of modern paganism and the Westernisation of Eastern beliefs at a range of venues including the Senate House Library, the University of Leicester and the Royal College of Art.

His first book, New Gods and Monsters, on the evolution of pop culture belief systems, will be published in 2017 by Daily Grail Publishing.

Ian is a Fellow of The Institute of Atemporal Studies. He blogs at catvincent.com and he can be found on Twitter @catvincent.

A resume of Ian’s writing and lectures to date can be found here: http://www.catvincent.com/?page_id=1309


RAWILLUMINATION: For those of us who couldn't afford to come from the U.S. to Festival 23, can you describe what the highlights were like? How did your own appearance go?

CAT VINCENT: Very hard to describe! (Here’s my latest newsletter where I try to approach summing the event up...).

Quickest possible summary: in a field of at­ peak 500 people, I did not encounter a single arsehole. I got at least three magical upgrades. People I’d never met before became pals; people I already knew became close; people I loved became immortal. The music was varied and excellent, the art fascinating, the spoken­ word and other performances magnetic. The spirits of both Bob Wilson and Ken Campbell were properly venerated. Possibly the best weekend of my life. And ... they’re doing it again in two years time.

My appearances ... well, I was scheduled to do two, ended up doing five. They seemed to be well­received ...  even the bit where I had the temerity to use Alan Moore’s words to impersonate Glycon! 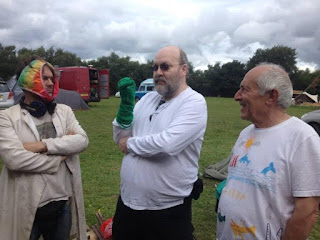 Cat Vincent with his hand puppet at Festival 23. I don't know the identity of the other other gentlemen.

RAWILLUMINATION: How did you get interested in Robert Anton Wilson? At this stage in your life, is there a book or books by RAW you particularly like?

CAT VINCENT:  I was a weird kid even before I got to reading Bob: something of a prodigy (but not having anything I was especially good at, other than Being Weird and reading a lot), the local library gave me adult tickets once I’d read all the kid’s books ...  then closed shelf access once I’d read all the adult ones. I had access to literally any book I could think of. I was reading Crowley, Tim Leary, De Sade and such by the age of ten. So I was well-primed for finding a second­hand copy of Illuminatus! in the local bookshop ... but it was Cosmic Trigger (back then there was only the one) which did the job. I was around 13 and it was barely in print. Between that and the other Wilson ­ Colin (especially The Occult and A Criminal History of Mankind) I was immediately upgraded, and somewhat prepared for a life of magic. Emphasis on the ‘somewhat.’

I always return to Cosmic Trigger and Quantum Psychology. Of the fiction, Masks of the Illuminati and the Historical Illuminatus Chronicles (especially Nature’s God) stand out.

(And now, Cosmic Trigger 1 is back in print, with a new introduction by John Higgs ... and I’m mentioned in it. 13 year old me would be astonished.) 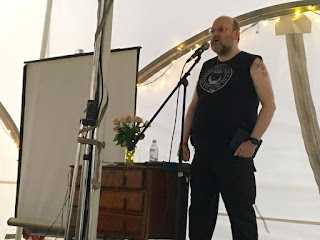 RAWILLUMINATION: Can you please say something about the book you are working on, New Gods and Monsters?

CAT VINCENT: New Gods is in part an expansion of my thoughts on the concept of "hyperreal religion" ­ those belief systems whose adherents freely admit that their source material is entirely fictional ­ as first examined in print by me in my Darklore piece ‘Believing In Fiction.’ It’s also shaping up to be probably the closest thing to autobiography I’ll ever do: my relationship to fiction and magic is, like any spirituality, intensely personal ­ so it’s the only way to both do the subject justice and contextualise it to a possibly skeptical reader.

RAWILLUMINATION: Aren't you interested in science fiction and fantasy? Who are your favorite authors?

CAT VINCENT: Hugely: SF was my first love as a child, even before the occult. (Here’s a piece I
wrote about my early hyperreal love of classic Star Trek a while back.)

Fantasy was, oddly, less so ­ though the appearance of what’s now called Urban Fantasy shifted my viewpoint: I like my fantasy to be almost like my actual life ...  none of that Second World stuff, generally!

Some of my top writers:

A special place for the extraordinary Andrew Vachss: read his bio, then his books.

RAWILLUMINATION: Can you recommend one or two books of magick to provide a solid grounding for those of us who don't know very much about it?

CAT VINCENT: A tricky one, as my education was hundreds of books and thousands of hours of experimentation!

As a primer to modern approaches, you can’t go far wrong with Grant Morrison’s Pop Magic. I also recommend Ramsey Dukes' SSOTBME! as a solid, skeptical intro to chaos magic approaches. The most fascinating new book on magic for me is The Cunning Man’s Handbook by Jim Baker, which is a revolution (and huge!). Best advice on books for the new mage: read widely, doubt heavily, double check your sources, test them personally. There’s a wealth of information out there, especially since the likes of Jake Stratton­-Kent have both transmitted and contextualised many old grimoires.

RAWILLUMINATION: How has RAW influenced your ideas about magick? Which opinion of his on magick do you think is spot on, and what did he say about magick that you disagree with?

CAT VINCENT: In a word: completely.

As a very young mage with no physical peer group, RAW’s multi­model approach was a revelation. By showing me the multi­model approach (around the same time as this idea was being explored with the originators of the Chaos magic movement) it allowed me to combine disparate elements into my slowly evolving praxis, and it’s never failed me yet.

The part I disagree with? His position of total disbelief. Despite my best efforts over some 40 years, there’s still stuff I believe in. I believe in magic: a Something that sometimes allows altering of perceived reality through indirect means ­ maps being used to change the territory. One might see this as an experiment in choosing one’s belief system ... I must therefore note that in 45 years of praxis, it has rarely let me down.

RAWILLUMINATION: You have kind of a unique perspective on Brexit — if I understand correctly, you shut down your combat magick consulting company because you were afraid of running afoul of EU regulations. Do you plan to restart your business in the wake of the Brexit vote?

CAT VINCENT: I truly did not see this question coming.

I voted Remain in the Referendum. I also got one of the oldest pieces of figurative art in England ­ the Uffington White Horse ­ tattooed on my arm right before I voted (23 June!) because whichever way the vote went, I wanted a piece of Old Albion on my skin ... and my Albion is and will ever be (as Eddie Izzard once put it) a Mongrel Nation.  (See also here and here.)

I also note that a pro­immigration seated member of Parliament was assassinated  by a white supremacist just before the vote ... and the Leave side won. I do not think it’s a huge step to say that was a blood sacrifice on behalf of some very bad magic.

I’m hardly a fan of the EU generally, or politics at all. But I am a xenophile, and I treasure what other cultures have brought to my land. (I am old enough to remember what British food was like before the influx of Ugandan Asians to our shores in the 1970s... *shudder*.) And not only are there no justifiable political or economic reasons for Brexit outside of a nostalgia for a non­existent Imperial golden age, the degree of racial and xenophobic brutality since the Referendum horrifies and disgusts me.

That said ...  no, I won’t be restarting Athanor Consulting. Mostly because, as Danny Glover once said, I’m too old for this shit.
on August 24, 2016

I'm too old for that shit too, but what made it old was the cynicism of ordinary people.
Nobody wants magic to be so real that they are out of their depth.
The self-proclaimed magicians i've met are big on wishful thinking and weak on discipline.
One of my most important achievements has been the verification of field anthropologist Carlos Castaneda's realityMap and the toltec methods as authentic and trustworthy.