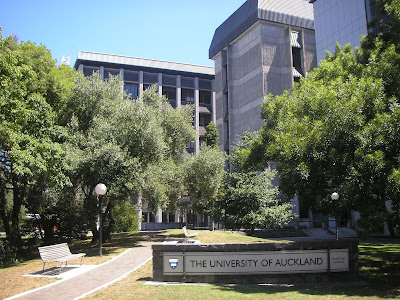 Want to learn about Vladimir Nabokov by taking classes from Professor Brian Boyd, the world's most important Nabokov scholar? All you have to do is move to New Zealand and enroll at the University of Auckland (pictured).

When Oz Fritz began reading Pale Fire, he suggested that "this novel will have a bardoesque aspect to it," and explained that bardo spaces are "spaces that convey the mood of death or the bardo." (See the comments in the post for the first week.)

Oz has been developing his theory that Pale Fire is "a classic of esoteric communication" (see the comments for last week's entry), but this time I want to go back to his earlier remark about death haunting the novel. We have yet to even come to John Shade's death, but I certainly think Nabokov's novel includes a sense that death can strike at any time. The poem Pale Fire is dominated by the suicide of the poet's daughter, and the passage that we cover this week is largely concerned with two sudden deaths: The farcical yet tragic death of the king's father in an airplane crash, just as onlookers have seen him "raise one arm in triumph and reassurance" after pulling his plane out of an apparently uncontrollable dive, and the sudden death of the king's mother, who was ill but had been "much better on the day before."

And in the beginning of this week's passage, the narrator describes his night terrors, haunted by "how given to regicide Zemblans are."

The careful reader cannot help but notice that the literary commentator must be the exiled king; how else could he know so much about the king's life? 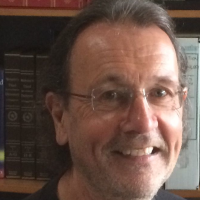 But is that all to the story? In his introduction to Nabokov's Pale Fire, Brian Boyd quotes the observation by Martin Amis that Nabokov, whatever else he is doing, "spins a jolly good yarn, with believable characters, a strong story-line, and vivid, humorous prose ... He does all the usual things better than anybody else." Boyd them observes that in a first reading, the reader can make out important elements of the plot, including figuring out the link between Professor Kinbote and King Charles II. (An aside, Martin Amis is himself is pretty great when he's at his best. See, for example, Money: A Suicide Note.)

But for Boyd, and Nabokov, part of the pleasure of reading is teasing out more. Boyd quotes Nabokov as telling his students at Cornell that "Curiously enough, one cannot read a book; one can only reread it. A good reader, a major reader, an active and creative reader is a rereader."

It seems too early to discuss any spoilers, but Boyd says there are four major  interpretations about what "is" "really" going on in the book, and that he himself changed his mind, coming to a new interpretation that "contradicts all the others."

Yea, it seems that Boyd went through at minimum these models:

2.) Hazel Shade wrote the poem (That was one I never considered!)

3.) The poem should be read for its own merits.

I LOVE your quote from Boyd about re-reading. Let us all have our select few precioussss books that we continually re-read.

Brian Boyd is supposedly working on a book about Karl Popper, and I am looking forward to that.

I look forward to rereading Michael Johnson's next book.

Yes, I view "Pale Fire" as a didactic novel in a similar way as RAW's fiction. Death seems a major theme, but so does the sun and sometimes the two themes connect reminding me of the persistent instruction in the Egyptian Book of the Dead for the departed soul to unite with Osiris, the solar deity. For instance, "The Swing" poem (p.94) about the daughter's death begins with "The setting sun..." Immediately before referring to Shade's death twice (p.101) Kinbote says that the cards of the poem "lie in the sun on my table as so many ingots of fabulous metal."

p.104 revisits the gender reversal image: "... for dancing in masquerades with boy-girls and girl-boys."

@Oz: . The sun's light is the source of all life. The light of the Moon is the pale fire, stolen, perhaps false. For most of the poem Shade explains why the afterlife has its appeal and yet it's a phantom image, like that of the reflected sky which killed the waxwing. By the end he seems to have decisively changed his mind, to be reasonably sure of a post-death existence. The sun and a butterfly also figure in the last lines of the poem... See Crowley's Tarot Trump 19, The Sun, for dancing boy-girls and girl-boys with butterfly wings.

Thanks Lvx, I forgot about the gender neutral children of The Sun card.

This line from p.98 suggests the path of Samekh on the Tree of Life which connects Yesod (The Moon) with Tiphareth (The Sun):

"... who with elemental regularity fell asleep at 9 and by six in the morning was planting heliotropes. ... This is the flower whose odor evokes with timeless intensity the dusk, and the garden bench, and a house of painted wood in a distant northern land."

Planting heliotropes seems a theme for this book; planting a remedy against death. Immediately following that quote is a new section:
"Line 70: The new TV." Kinbote also uses TV in a section title for the commentary on "Line 61: TV's huge paperclip." If we accept the possibility that Nabakov employs Joycean puns to get the message across then we can interpret TV as "tell a vision." It then makes sense to put "The new TV" after the "planting heliotropes" image for that seems the new vision.

The section between the two sections with "TV" gets labelled simply "Line 62: often" This, to me, suggests Crowley's key instruction for successfully gaining the Knowledge and Conversation of the Holy Guardian Angel: INVOKE OFTEN. Or sometimes given as: Invoke often! Enflame thyself with prayer. I found this interesting note on an occult forum:

"One of the best discussions of the phrase "Invoke Often" can be found in the Appendix sections of Robert Anton Wilson and Robert Shea's _The Illuminatus Trilogy_. It is originally from the Abramelin material."

Regarding "often" in this sense also corresponds with one meaning of 62.

I wonder if Kinbote got a job at College of the Surf from Pynchon's Vineland.

The Wagner record appears in the note to line 62.

It's always tricky telling a colleague or acquaintance they have bad breath. Of course, Kinbote misses this, the fucking nut.

The cops come out and suggest that all the noises Kinbote hears at night are hallucinations. But this troubled weirdo Kinbote:

"Well did I know that among certain youthful instructors whose whose advances I had rejected there was at least one practical joker; I knew it ever since the time I came home from a very enjoyable and successful meeting of students and teachers (at which I had exuberantly thrown off my coat and shown several willing pupils a few of the amusing holds employed by Zemblan wrestlers) and found in my coat pocket a brutal anonymous note saying: 'You have hal.....s bad, chum, meaning evidently 'hallucinations,' although a malevolent critic might infer from the insufficient number of dashes that little Anon, despite teaching freshman English, could hardly spell."

Michael---that halitosis bit cracked me up as well.