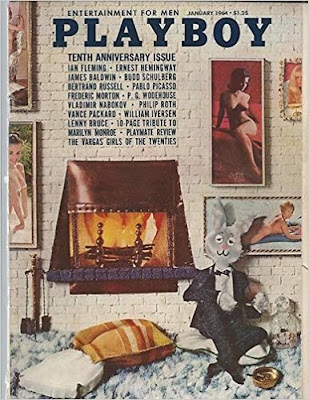 Cover of January 1964 issue of Playboy magazine, which included an interview with Vladimir Nabokov.

I read this particular section on my birthday, enjoying the sentences and the witticisms. There are so many good sentences in this book, and I particularly like this one: "I saw a world-famous old writer, bent under the incubus of literary honors and his own prolific mediocrity, arrive in a taxi out of the dim times of yore when Shade and he had been joint editors of a little review." (From the commentary to line 181).

Comments on some other bits:

Line 149 commentary: Kinbote seems to be repulsed by the sort of young women who delight most men and his artfully phrased repugnance is a recurring amusing motif in the novel: "A sleepy and sullen expression blurred whatever appeal her snub-nosed round face might have had for the local shepherds .... " Is it just me, or is the whole section about Garh an inversion of the old dirty jokes about the farmer's daughter?

Line 172, books and people: It seems to me that this is Nabokov speaking directly, under the guise of Shade -- the comments attributed to Shade sounds like the statements Nabokov made in his interview with Playboy magazine.

A couple of bits from the interview:

Nabokov: I think my favorite fact about myself is that I have never been dismayed by a critic’s bilge or bile, and have never once in my life asked or thanked a reviewer for a review.

Nabokov: To return to my lecturing days: I automatically gave low marks when a student used the dreadful phrase “sincere and simple”—“Flaubert writes with a style which is always simple and sincere”—under the impression that this was the greatest compliment payable to prose or poetry. When I struck the phrase out, which I did with such rage in my pencil that it ripped the paper, the student complained that this was what teachers had always taught him: “Art is simple, art is sincere.” Someday I must trace this vulgar absurdity to its source. A schoolmarm in Ohio? A progressive ass in New York? Because, of course, art at its greatest is fantastically deceitful and complex.

"Art at its greatest is fantastically deceitful and complex." The credo behind his most "complex" and "deceitful" novel, Pale Fire?

In "Logic of Sense", Deleuze touches upon the use of portmanteau words for the production of sense. Nabakov introduces a couple of obvious ones in the Zemblan geography: Yeslove and Mandevil Forest. Yeslove reminds me of the story of how John Lennon met Yoko Ono at an exhibition of her avant garde art one of which featured the word "yes." Mandevil recalls the Devil tarot card, the strongest expression of male energy in the tarot. Another of the villages mentioned, Odevalla, could translate as heart song.

So far, it seems to me that the poem is just an excuse for Kinbote/The King to express himself. Even before the poem was written, Kinbote tried to influence Shade on its content.

Those portmanteau words show a very basic form of qabalistic reckoning. For a more complicated example note that The King's pseudonym, Kinbote, starts with the first three letters of "king" with the "g" (gimel) being substituted with "b" (Magus), "o"(Pan), "t" (cross), and "e" (The Star). The substitute letters indicate a method for travelling the path of gimel as well as for being a king in the esoteric sens.

@Oz "Kinbote's attitude toward the young girl ... " yes, exactly, it's the opposite of how Humbert Humbert would react. Nabokov I think is trying to demonstrate that Humbert Humbert is a character he made up, it's not him.


"So far, it seems to me ..." Kinbote clearly is off the rails. He is both insightful (at times) and crazy to the point of being oblivious to the obvious (much of the time).

The account of Gradus moving from job to job in the note to line 171 makes me think of Lee Harvey Oswald.

Note to line 181: I didn't know the expression "Trinity Sunday" for the first Sunday after Pentecost in Eastern Christianity. I enjoyed the discussion of Proust in this note.