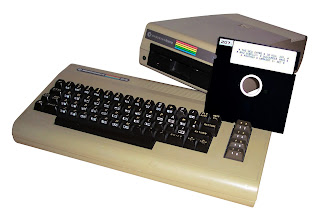 A Commodore 64 computer with a disk drive. If you didn't have a monitor, you could use a TV set as the monitor.

[Here is a cultural artifact from the early days of the personal computer revolution, the 1980s, when people connected via bulletin board systems rather than the Internet. But this 1986 computer chat features Robert Anton Wilson. A note at the end of this says that chat took place using a Commodore 64 computer, which is a computer I used to use.

Richard Rasa passed on the link to me, along with a recent email from the source, Ralph Fucetola. Mr. Fucetola wrote, "During April 1986 Bob was visiting us in Morristown when an online chat was arranged. We used my Commodore 64 connected to an old vacuum tube monitor. No graphic interface, just the Turing purity of terminals and typing.  The transcript has been posted to various places, including the POEE site, but does not seem available there anymore. I found a copy of the transcript on on old hard drive and just posted it here: http://www.LifeSpirit.org/RAW-1986-chat.html -- enjoy!"

Thank you for sharing this. In the universe next door we began our "The World Turned Upside Down" discussion book today.