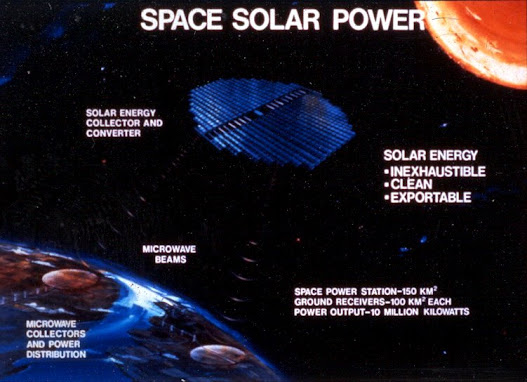 From the Space Studies Institute.

Before we get into discussion of this week's episode, I just wanted to thank Chad Nelson for preserving such an interesting interview in one of RAW's books.

Probably my favorite RAW interview is, so far as I know, not available on the internet; it's the interview of Wilson done by Scott  Apel and Apel's late friend, Kevin C. Briggs. Apel has reprinted it twice: In Science Fiction: An Oral History  (the Kindle is only $1) and in Beyond Chaos and Beyond.

This interview, which features Safransky patiently asking Wilson to explain points which might be unclear, covers many topics, and I will only comment on some of them.

1. Wilson says, "You can't live comfortably in Ohio, for example, if you're not brainwashed into a Republican, agricultural, Protestant reality tunnel." This is more true now than it was in 1987, when Ohio was known as a "swing state." At this point, it has definitely trended Republican.

Wilson adds (a few sentences later), "People who are uncomfortable as white, Protestant, small-town chauvinists become uncomfortable when they feel the alien signals coming in from New York and Los Angeles and from all around the world." I suspect they feel uncomfortable partially because they feel a loss of status. In terms of the eight circuit model, I think they are threatened in the second circuit.

2. There is considerable discussion in the interview about getting solar power from space. (The Space Studies Institute web page has a section on solar power from space which includes book recommendations). Given that SpaceX had reduced the cost of going to space, and given that awareness of the need for green energy to cope with global warming seems pretty strong, it seems odd to me that solar power satellites doesn't get more discussion.

As I recently discussed, one of the virtues of the new RAW Memes book  is that it covers many of Wilson's ideas in succinct fashion. I could not find a quote that deals directly with forgiveness, but here is a related quote: "Since most humans are still controlled by fairly robotic reflexes, the bad energy of the past far outweighs the good, and the tendency of the wheel to to keep moving in the same terrible direction, violence breeding more violence, hatred breeding more hatred, war breeding more war. The only way to 'stop the wheel' is to stop it inside yourself, by giving up bad energy and concentrating on the positive. This is by no means easy, but once you understand what Gurdjieff called 'the horror of our situation,' you have no choice but to try, and to keep on trying." (A quote from Cosmic Trigger, on page 124 of RAW Memes.)

I thought Wilson had talked about forgiveness shortly before he died; I don't see it on the blog he did the last few weeks of his life. Am I misremembering, or not looking in the right place?

A note in the interviewer: The interview is from a Chapel Hill, North Carolina, magazine called The Sun, which was founded in 1974 by Mr. Safransky. The magazine still exists, and Mr. Safransky is still listed as the "Editor and Founder."

Email ThisBlogThis!Share to TwitterShare to FacebookShare to Pinterest
Labels: Chad Nelson, Natural Law Or Don’t Put A Rubber On Your Willy And Other Writings From A Natural Outlaw, Sy Safransky

Reading P. G. Wodehouse seems one way of "concentrating on the positive." When one reads two or three Wodehouse stories or around 46 pages of one of his novels, one sets up Wodehouse Conditioning Fields in the organism. These W. C. Fields exert healing influences on all eight circuits of the nervous system.

tom, do you have any SF books you recommend on space mining/migration? A client recommended _Delta V_ to me but I couldn't finish it. I read _Red Moon_ by KSR and found it entertaining enough. One day I'll go after KSR's Mars trilogy, but I'm so-so on his writing based on other books of his I've attempted. (I thought _Shaman_ by KSR was just awful.)

I thought it was a pretty good interview. The interviewer presses Wilson more than others I've read and I think I sense a little testiness in Wilson. Overall I agree with him, again I have my reservations about undue optimism, but his attitude that we should all be striving against suffering, for everyone, is I'll happily accede to.

I also have trouble with some forms of the Buddha. Buddhism can seem to be a very gentle, perennial philosophy and it can seem like the most dire, astringent form of nihilism depending on who you are reading. I heavily prefer Mahayana and Zen writers myself.

His forgiveness exercise seems like a valuable tool for anyone's arsenal. I'll start trying to incorporate that in my life.

I love this interview! Seems kind of genius to include the SUN interviewing WILSON; absolutely brilliant! RAW sounds very open and revealing. The forgiveness ritual gives potentially powerful magick. Love is the law, love under will.

First time I've seen him express a belief that something survives the death of the body. After expressing this with what sounds like more than 50% certainty, he makes another mind-blowingly brilliant point:

"SUN: Is that something (that survives death) diminished when we die? Or is it perhaps enhanced?

WILSON: It probably is enhanced, but I think we can get all the advantages of death without dying.

WILSON: With certain alterations of consciousness."

RAW suggests some methods then predicts a pill in 10 years that will be able to do that. To my knowledge, this pill hasn't been produced. RAW concludes with:

This seems possible without drugs.

@quackenbush Tom recently mention "Too Like the Lightning" and "Luna: New Moon. The former is book one (out of four) of the "Terra Ignota" series that takes human space expansion very seriously/spiritually. The latter is a compelling idea about what Moon colonization could look like in it's most fantastically-bizarre, near-future form.

@Eric- I absolutely agree. I have read Wodehouse when I was depressed or anxious and it always makes me feel lighter. Perhaps Jeeves would be a good lens for examining the Holy Guardian Angel.

Some of Wilson's comments on evolution remind me of Spinoza's Ethics:"I work on the assumption evolution doesn't make mistakes." (p.156). And, "I don't think the universe is a steady state. I think it's an evolving self-organizing system." Also the notion of man as inseparable from nature, that RAW argued in the first essay here, resonates with Spinoza.

Tom, I remember RAW speaking of forgiveness frequently in his later years but not shortly before he died.

W.C Fields cracks me up and I haven't even read Wodehouse yet. All the more reason to live longer. Humor appears one thread of continuity in Natural Law OR don't put a rubber On Your Willy & Other writings from a natural outlaw

The interview kicks off with “the significance of the year 1932”. In fact, it appears that both Hitler and Roosevelt came to power in 1933.

“If you don’t wake up once a month and notice you’ve been a schmuck lately, you’re going to go on being a schmuck indefinitely.” (p. 148) I am glad to now have the Cosmic Schmuck principle on paper. I have my monthly Cosmic Schmuck day on the 23rd, although I admit not always remembering to remember how much of a schmuck I have been.

While I realize that these words are 35 years old, I have to say that RAW seems to me out of touch with the seriousness of climate change when on pages 151-2 he discuss the “despoliation of the environment” and would tell “the left-wing ecological propaganda” to “not get too excited”. Nowadays, such phrasing would be considered very reactionary by mosbunall of us. I have issues with works such as Hans Rosling’s book Factfulness, because despite being rooted in, well, facts, I see them as weapons that can easily be seized in order to promote the status quo. If the Thames is cleaner than 150 years ago, and more children worldwide go to school than ever before, then why correct our current course of action, right?

Then we get to the Space colonies and I also tend to favor trying to get our shit together down here before starting any sort of serious space exploration. I just find it more, shall I say, down to Earth? To me, the elephant in the room when it comes to space exploration is the heavy extractivism necessary for it. I really wonder what RAW would make of Elon Musk and modern-day transhumanists. I did laugh hard at “fuck you, Kesey. He can stay in his bloody farm in Oregon.”

I understood the talk about “death without dying” as the ego death that can happen on psychedelics or with some forms of yoga. The following sense of boundaries being wider, or more flexible, would explain why RAW says that “it probably is enhanced”.

Spookah, many people do you use death as a metaphor for death of the ego in the way you describe, it seems often thought of in this way. The interviewer here specifically asks RAW what happens after the death of the body; his response I quoted earlier addresses that question.

Thanks for correcting me, Oz. Indeed, Wilson says: "I'm inclined to think the ego dies when the body dies. What survives is not the ego." So they are at this point unambiguously discussing physical death.

@Spookah. I agree with a lot of your assessments. I'm still for my sci-fi fantasia of the world of tomorrow but I detest Musk. The environmental stuff bothered me as well...as do arguments that "x is better than it was, and life has always sucked, so everything is fine."

I hope you read my introduction to The Walls Came Tumbling Down.

Thank you for your comment, Rarebit Fiend.
I am looking forward to read you!

I love that the Hilaritas editions feature new material by active members of the current RAW community. I find this inclusivity to be akin to the horizontality practiced in anarchist circles, or modern ways of democratic decision-making.
In effect, RAW books are now being introduced by people like you or Michael Johnson, who aren't particularly famous on a big scale, and on the other hand John Higgs, who's a bit more famous, or Israel Reardie, one of the biggest name of 20th century occultism.
This also reminds me of Tim Leary's idea of finding the other.