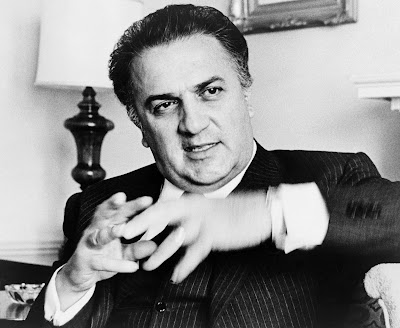 The questions answered in Part IV span 25 years and seven different interviewers. There’s a lot of material in the last section and most of it has already been covered in the book. Taking this into consideration, as well as the fact that our reading group seems to be winding down with the summer, I’ll touch lightly on a couple topics and wait to hear what your thoughts are as we draw near the end.

The fourth part of email to the Universe begins with the overly familiar dying words of the Old Man of the Mountain and another of the other Old Man’s quips preceded by a pronouncement by Federico Fellini. During my undergrad years I was enchanted with Fellini and would stay up late watching 8 ½, Juliet of the Spirits, La Dolce Vita, Amarcord and whatever else I could find. I’ve mentioned I am not a huge film aficionado but Fellini, like Lynch and Ken Russell, is one of the directors who has captured my attention. “Nothing is known. Everything is imagined” make sense in light of fates of his protagonists. I’ve always prefered to think that Guido didn’t commit suicide at the end of 8 ½ but instead found a way into his memories and fantasies, away from drear, demanding reality.

My favorite line of any haiku from the “Old Man” sequence has to be: “caw caw caw Lord Lord.” This is an astounding rendition of how the crow’s call registers to the human ear...I often listen to their croaks and wonder why they make me shudder so. The first questioned answered is from Neal Wilgus back in the prehistoric year of 1977. In a footnote RAW reflects on the dismal state of the political circus as of 2004 compared to the year when the question was first offered. Eleven years after the Wilgus interview he states on pg. 239 that Reagan has brought more stupidity to the White House than any other person in Wilson’s lifetime.  RAW seems to have had a consistent state of bewildered dismay at the blatant progression of conservatism’s bald-faced goal of despotism. When Clinton is mentioned on pg. 256 Wilson points out the increased scrutiny of President’s private lives by the media (he also acerbically ends his thoughts on the subject that even if it is “open season” on politicians, they deserve it). Like most of the political repartee in email these observations are still evergreen and the situation(s) unresolved.

Wilson discusses his writing influences, his interests, marijuana, conspiracies, mysticism, life extension, and space migration. These subjects are all covered multiple times in different parts of the book; I’ve just finished rereading The Homing Pigeons after the other two volumes of Schroedinger’s Cat and Cosmic Trigger II while we’ve been covering email so I haven’t had many days go by the last month without reading some story involving Pound or Hemmingway, Korzybski or P2. RAW was consistent. Not that these interviews aren’t enjoyable and don’t serve as a refresher of the many different topics covered in this book as well as Wilson’s general corpus, but I really have very little to add.

Between the lot of us at some point in these write ups or comments we’ve shared our thoughts on pretty much everything that is covered in these interviews.

So I’d like to ask those of you who have stuck with me a few questions:

Has your general perception of RAW or any of the ideas discussed altered significantly while going over email to the Universe? Was this anyone’s first time reading email?

Where do you feel email to the Universe fits in RAW’s overall output? Does it compare to collections such as Coincidance or Right Where You Are Sitting Now? Or does it remind you more of the later Cosmic Triggers or TSOG?

Is this a fitting final book for RAW? Is it meant to be a final book? Does the chronology of publication mean anything?

What are some of the differences you noticed between younger and older Bob in the text?

Note: The formatting for the last paragraphs on pg. 234 and 256 seems to be centered instead of aligned left with the rest of the text.
on August 07, 2017

I found the Fellini section of "Spirits of the Dead" terrifying. The first few times I watched it, I couldn't finish it.

Question one: My ideas about RAW and the ideas discussed have changed a little. McLuhan's ideas about postliterate society seem very relevant to me. We live in a world where screens dominate, even though people still read books on paper. This seems similar to the transition from a mostly verbal culture to a mostly text based culture at the time of Plato, Confucius, and Buddha, etc. I feel the brunt of this transition teaching or at least trying to teach during the current transition. This transition also illuminates the presidency of Don Trump, and I think Bob Wilson's writing provide a golden thread to lead us through this labyrinth. These weekly meditations with Bob have helped me get through the first few months of Don's presidency as well as challenges at work as a teacher in the postliterate age. Thanks to Greg for your posts, as well Tom and Oz and the rest of the gang.

Quesiton two: "email to the universe" has a unique place in Bob's oeuvre. He cultivated it from his life's work shortly before his death, so it gives an overview of his writing as well as serving as a capstone or coda. The magnificent ending to TSOG provides a different kind of coda to his lifework. This reminds me of the two finales Beethoven wrote for his String Quartet Op. 131.

As my attempted answer to the second question, I would say that "Email to the Universe" is a really strong collection. I like it quite a bit better than "TSOG." The only Cosmic Trigger book it reminds me of is the the third one -- the first and second are too integrated and don't feel like anthologies to me.

The trailer for the new Jodorowsky film, "Endless Poetry" reminds me of Fellini.

I enjoyed the interview where RAW spoke of the emergence of his writing career and of other jobs he had. Also thought it interesting that he regarded the après vie dream collaborations with P. K. Dick legitimate endeavors.

To answer the questions: my general perception of RAW wasn't significantly altered, rather it was affirmed. I have a very high regard for him as an agent for Higher Intelligence, now after reading "Email to the Universe," even moreso. This was my second time through the book and I got exponentially a lot more out of it than the first time. The hint in the Introduction to examine the form of the book opened my eyes to seeing it in a new light. The Introduction wasn't there the first time I read it.

"Email to the Universe" has a unique place in RAW's output because it's the only one where he explicitly states the intention to use words in a certain way to change how the reader perceives the world. It seems a very fitting final book. It's been said that Crowley put everything he had into "The Book of Thoth" because he knew it to be his last major book and I bet that RAW did the same with "Email to the Universe." I regard it as a masterpiece of magick instruction. The older RAW puts in much more multiple levels of meaning than the younger RAW.

Throughout the period since I started reading Wilson's books I have always thought how pregnant Wilson's sentences were; how every sentence has a meaning. So I really enjoyed his conversation with Jeffery Elliot in 1981 about the process of writing: " For example, from Pound I learned that every sentence should have a life of its own. There should be no empty sentences." (p.230) AHA moment! In that sense, my second reading of the "Email" seemed more affirmative (as Oz also mentioned in his comment) for me.

Wilson's talent and ability to synthesize all the stylistic influences (Pound, Joyce, Faulkner, Chandler, and some others) and combine it with his multidisciplinary knowledge = Tour de Force !!!

I definitely got much more out of the book during my second reading. Most of the time that seems to be the case with any other book upon the second reading or seeing a film again. It seems to me, as we evolve and circumstances around us and in the world evolve, we tend to alter some of our perception, and I wonder if we read "Email to the Universe" again in five years how would our comments differ?

Answer One: This was my first time reading Email to the Universe and like most of Bobs work, I loved it. It has been great hearing all of the different perspectives throughout this reading group as well.As far as my perspective of Bob goes,there will always seem to be a common thread throughout his work but a cut and dry perspective about his personality isn't something that comes easily.The Model Agnostism he adapted from Bohr rings loud and clear through a lot of Bobs work and life in general.

Answer Two:To me it seems Email compares with Coincidance in overall output,though to be fair i haven't read TSOG or Right Where You Are Sitting Now.

Answer Three: Whether or not this was meant to be his last publication i can't really say. This being my first time reading Email it is entirely possible certain aspects of the book are lost on me as Oz Fritz continuously seemed to bring to my attention through his wonderful knowledge of Crowley and Kabbalah. Perhaps my second time through i will have a different perspective as Branka pointed out.

Answer Four: One of the things that sticks out between old and young Bob are his perspectives on life extension and where he fit into that whole Reality Tunnel. Life Extension was a huge part of Bobs early work and i think for obvious reasons he eased back a bit on that.Not to say that he didn't think in some form or fashion that Life Extension wasn't still on the horizon,as it does still appear to be, it just seems that in coming to terms with his own demise that it no longer fit into his later work for whatever reason or maybe he had felt he had pushed that enough. The whole concept of Life Extension,as put forth by RAW, really put into perspective the way in which a majority of society passively excepts Death.
Old Bob? Young Bob? Praise Bob!