Special Report: The origins of 'Keep the lasagna flying'

As I mentioned about a couple of weeks ago, a German reporter named Maximilian Netter is hard at work on a German public radio documentary about Robert Anton Wilson. RAW's advice to "keep the lasagna flying" came up.

Here is Rasa explaining the scene. Christina Pearson is of course RAW's eldest daughter, and Marlis Jermutus is Rasa's old friend and a member of Rasa's band, Starseed.

"Marlis and I had a great time in Santa Cruz hanging out with Christina and the German public radio reporter Maximilian Netter. Max is a really nice guy and interesting to us as someone from his generation who only discovered Bob’s writing two years ago through a friend who had pulled himself through rough times with the help of Cosmic Trigger. Max's focus in the hour long documentary, if I could paraphrase what he said, was to look at Bob’s view of reality and art and how that relates to the concept of Reality Tunnels. It’s public radio, so he has the time to explore Bob’s life and ideas. He had a wide range of questions for us. Max collected a lot of audio, probably about 6 hours or so just with the three of us. We had a long interview session with Christina, Marlis and me at Christina’s friend Kim's wonderful house in Santa Cruz, and the next day Christina and Max had another long session, a couple hours or longer. He had one other session with Marlis and me in our hotel room. On Saturday, with beautiful weather, he had a session talking with Christina in the back seat of my car as we drove around Santa Cruz, pointing out Bob and Arlen’s two homes, their favorite restaurants, places he liked to hang out, places where he spoke publicly, the Coconut Grove where his Meme-orial was held, and Monterey Bay where his and Arlen’s ashes were scattered. 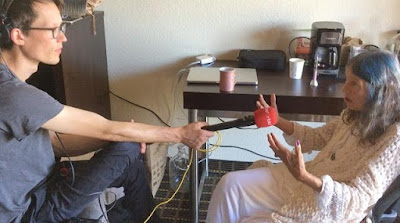 Max interviewing Marlis (in German), in our hotel room. Marlis has spoken German to me since I met her in 1970, even before my German was good enough to follow what she was saying. Now I understand her perfectly, and so I was interjecting occasionally, although in English. My spoken German is not near good enough for a German audience. They would miss whatever point I was making while laughing at my accent and syntax. (All photo captions from Rasa)

"Before Max arrived on the West Coast, he stopped off in New York and had a session with Douglas Rushkoff. While in Santa Cruz, he also met with David Jay Brown, and I know he was planning on stopping by WAMM to see a few folks. He really wanted to meet Val Corral, the founder of WAMM and a very close friend of Bob’s, but Val is in Ireland so they intend on Skyping. After Santa Cruz, Max is heading down South to interview Adam Gorightly, and then he’s taking a little time off to visit Yosemite Park before flying back to Germany. Max really wanted to interview Paul Krassner and Nick Herbert, but sadly both of them have recently stopped doing interviews. 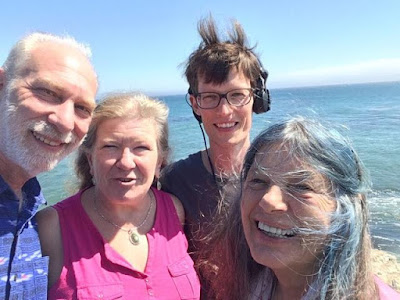 On the edge of Monterey Bay

"When we were all together at Kim’s, the subject of lasagna came up, more as one of Bob’s favorites foods. Before I could turn on the camera on my iPhone, Christina was explaining that her mother had an incredibly spontaneous and excitable manner when expressing herself, sometimes resulting in food flying. I clicked the record button and captured the rest of the description: 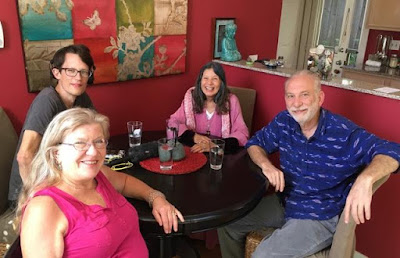 "All of his audio in English will be translated into German for the documentary. Max says they have an interesting new way to do that while somehow preserving the English underneath. I’ll be curious to hear that. He says they would also like to produce an English language version and sell it to the BBC, but if that comes together that wouldn’t be until early 2017." 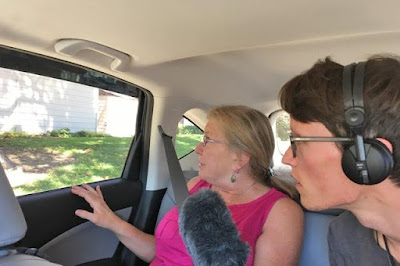 In front of Arlen and Bob’s Brommer Street apartment in Santa Cruz.

After Rasa wrote to me, I wrote back and confessed that I had never understood "keep the lasagna flying," and he wrote to me again. Rasa:

"I do believe that Bob first published the phrase "Keep the Lasagna Flying" in Reality Is What You Can Get Away With (1992).

"Here are the book's first mentions or references to lasagna representing the brain . . .

"Bob came to take the phrase to mean something like “free your mind and keep it active.” He was a lover of Dadaism, so I think for him the metaphor seemed particularly playful. For a long time he ended all of his emails with "Keep the Lasagna Flying.” When Marlis gave him the German translation, he started using that: "Las die Lasagne weiter fliegen!"

"I think I may have written this to you once, but we had a flying lasagna incident when eating dinner with Bob and Arlen in their Brommer St. apartment sometime in the 90’s, so hearing this account from Christina was particularly enlightening for me!"
on September 23, 2016

I recall seeing somewhere RAW saying "keep the ravioli flying," something about that Italian food!

I just did a quick search through early emails from Bob and found the follow tag lines:

I've always wondered where keep the lasagna flying came from! I still wonder it that inspired the Church of the Flying Spaghetti Monster.