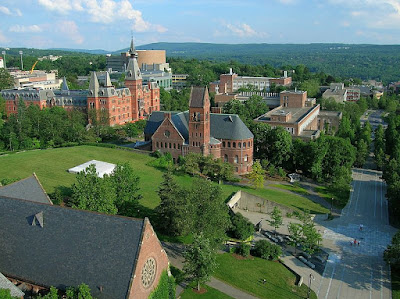 Cornell University, the Ivy League school where Nabokov taught for about a decade.  (Creative Commons photo).

This week we begin the "Commentary" section of the book. Let's go for about 17 pages, covering the analysis through line 61. In my old mass market paperback, that's pages 45-61. In any edition, read until Kinbote begins the discussion of line 62.

The commentary is essentially a collection of footnotes, and often within them, the book refers the reader to another footnote -- much as in Robert Anton Wilson's The Widow's Son, the footnotes refer to each other.  Eric Wagner says that Pale Fire influenced Wilson when Wilson was writing The Widow's Son.

Brian Boyd, in his book length commentary on the novel, Nabokov's Pale Fire, says that readers are meant to follow Nabokov's references to other portions of the commentary and gain early information about what is "really" going on.

This is the section which is ostensibly a literary analysis of John Shade's poem, but it doesn't take long for apparently personal material to intrude, often in funny and odd ways. Why is it relevant, for example, on the first page of the commentary, that our critic is repulsed by the "gusto" in which robins in his yard gobble up worms?

And also very soon, the ostensible literary commentary gives us details of the sad story of the Eastern European king Charles, whose reign "will be remembered by at least a few discerning historians as a peaceful and elegant one" (page 46, commentary to line 12).

The "would-be regicide Gradus" (page 46, end of commentary to lines 1-4) will be an important element of the plot.

Page 47, although Kinbote makes a half-hearted attempt to make it sound like he is talking about someone else (he resembles "my disguised king" page 47), it's clear that the professor knows more about the daily life of the monarch than he ought to. It's already possible for the reader that Kinbote "is" (or believes himself to be) King Charles.

Commentary to lines 47-48, I thought the satire on the detailed instructions from landlords was really funny. My wife and I often stay in rented houses, so I could appreciate it. Nabokov never owned a home in the U.S. and often stayed in the rented homes of faculty members away on sabbatical.

Kinbote apparently does not realize how bad he looks when he describes spying on his neighbor.

In the intro, Kinbote tells the reader to read the commentary before reading the poem, so I did that the first time I read the book (a few weeks ago).

I just watched the 1934 "Merry Widow" wherein an Eastern European monarch packs up intending to flee his country - it reminded me of "Pale Fire".

I think Kinbote's repulsion at the bird eating worms correlates with his vegetarianism. Bob Wilson said, "Everyone serves a purpose. My purpose is to help vegetarians feel superior."

The note on the judge's house is very good. I especially like his daughters' names. I was puzzled by the description of the large picture of the judge and his wife with sexes reversed. Is that just a misrepresentation by Kimbote, or is there something I'm missing?

Perhaps this only shows aggravated confirmation bias that I all ready regard Pale Fire as a classic of esoteric communication. Nabakov not only writes, on one level, in the lingua franca of magic metaphors, he gives several clues for reading that level.

By coincidence, about a week before this group commenced I discovered that MacGregor Mathers, the head of the Golden Dawn and Aleister Crowley's teacher, was very active in the Carlist movement which had to do with royal succession in Spain and Britain. He was active to the point of arranging the purchase and shipment of weapons to the cause in Spain. Crowley also considered himself a Carlist at the time according to Churton, in "Aleister Crowley in America."

Second paragraph in the section Line 12 that crystal land: "Alas, he would have said a great deal more if a domestic anti-Karlist had not controlled every line he communicated to her!" Nabakov introduces the Karlist movement with a line against it, again recalling, for me, "Against the Day."

The exclamation: ".... venerable uncle's raucous dying request: "Teach Karlik!" on the following page reminded me of Mathers and the Golden Dawn. He wrote all the rituals.

Right after the "Teach Karlik!" exclamation, p. 76 in my edition, Charles Kinbote references Finnegans Wake and its language - "Southey's Lingo - Grande..." On p. 93 he gives a very Joycean interpretation to the second line of Shade's poem, "The Sacred Tree." That line is: "A muscat grape."
Kinobote writes: "I do not know if it is relevant or not but there is a cat-and mouse-game in the second line, and 'tree' in Zemblan is grados." Imo, Nabaokov shows the reader multiple levels of poetic interpretation. That Joyce used qabalah in Finnegans Wake has been well established. Sacred tree suggests the Tree of Life.

A similar deconstruction and reinterpretation of language turns up earlier in the first paragraph under Lines 47 - 48 the frame house between Goldsworth and Wordsmith (p.82) "...our poet is less concerned with spatial exactitude than with a witty exchange of syllables invoking the two masters of the heroic couplet..."

@Lvx I don't quite get it either. If the judge had been British, I could assume he had been photographed in his wig, hence the "Medusa locks."

@Eric, I love it that you followed Kinbote's directions in how to read the book.

@Oz, Nabokov was very familiar with James Joyce's work and used to teach about it. Eric directed my attention a few days ago to a photo via Facebook of a sketch Nabokov of Dublin drew to illustrate a discussion about "Ulysses."

Sherlock Holmes gets introduced shortly after the Finnegans Wake reference through what Kinbote calls the "Case of the Reversed Footprints." Sherlock Holmes notices normally unseen clues by being very attentive and observant.

The theme of reversals and opposites already turns up several times in "Pale Fire." Even in the comments here this week we see Kinbote suggesting reading the book in the reversed order it's presented in; the cat and mouse game in The Sacred Tree poem and the picture: "In the study I found a large picture of their parents with the sexes reversed." Also, "How persistently our poet evokes images of winter in the beginning of a poem which he started composing on a balmy summer night!" - beginning the comment for Lines 34-35.

The picture of the sexes reversed recalls an old gnostic injunction about the male becoming as a female, the female becoming male and the two becoming one. I don't remember how it goes verbatim, but RAW quotes this gnostic phrase at the beginning of one of the "Schrodinger's Cat" books when they were released as 3 separate books. Not sure if it made it into the single volume edition.

1915 marks the birth of both King Charles and Orson Welles, perhaps one and the same person.

Nabokov's fascination with chess and butterflies permeates the novel.

The note to line 12 suggest that the line "Upon that snow, out in that crystal land!" might mean Zembla. I don't think Shade meant to imply cocaine and crystal meth, but if he had, the crystal land might have meant the Inland Empire of Southern California or the Albuquerque of "Breaking Bad".

The note to line 12 also calls "Finnegans Wake" "Finnegan's Wake", adding an apostrophe. Nabokov famously disliked the Wake, saying, "Finnegans Wake is nothing but a formless and dull mass of phony folklore, a cold pudding of a book, a persistent snore in the next room, most aggravating to the insomniac".

The reference to Picasso still life in this same note makes me think of Picasso's role in Welles's "F for Fake".

The note to lines 17 and 29 points to the note to line 596 which mentions July 10, Proust's birthday. Trivia? Perhaps, but Proust does show up elsewhere in the novel.

The note to line 27 makes me think of Phil Farmer's Wold-Newton family tree which includes Sherlock Holmes and of Farmer's novel "The Peerless Peer". January 26 of 2018 marked Phil Farmer's centennial. Man, I used to love his books.

This line also mentions "three casual allusions to royalty. Line 605 says "our royal hands are being tied", line 822 says, "killing a Balkan king", and line 894 says, "Sit like a king there, and like Marat bleed." Very S & M.

Bob Wilson seemed very pleased with "Everything Is under Control" when it first appeared. He said he had tried to create hypertext on paper with that book. Nabokov seems to have created a hypertextual novel with nested links within links.

The note to line 47-48 mentions Time Lost, another Proust reference. It also refers to a bust of Dante. My grandmother had Dante bookends: one of Dante and the other of Beatrice. I broke the Beatrice one, but I still have the Dante bookend. This speaks to the idea of artist as hero in the nineteenth and early twentieth centuries. When visiting antique stores with my wife I frequently saw busts of Beethoven. I love the famous painting of Liszt playing a piano with a huge bust of the Big B on top of it.

This note also has a racist reference to jazz. The book has few music references. Once Kinbote has a Wagner record playing, and the book has a few other negative comments about jazz.

What I liked about the Finnegans Wake reference was how botched the spelling way: "Finnigan's Wake"