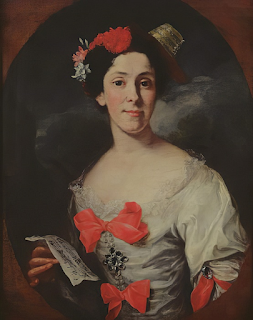 Portrait of a Woman, or The Music, by Neapolitan painter Giuseppe Bonito c. 1750-1765

I believe the letter to Mother Ursula from Maria shows why Tom Jackson considers her to be the roundest female character in RAW’s oeuvre; despite the not-so-great-time-to-be-a-woman she still sparkles and demonstrates that she has her attention on the events that would become history. She’s intelligent enough that she is able to surprise Benjamin Franklin with her acumen, overcoming his prejudice towards southern Europeans; her meeting with Franklin and the corresponding footnote that brings up de Selby’s allegedly freehanded nature with women in interesting to read in the years after #metoo and the continuing cultural dialogue.

I’d have to say that I have found myself becoming fond of Jean Jacques Jeder. RAW uses Jeder’s appearance to inject some bitter irony into his internal celebration over finding such a “nice” job. Like Armand, we can see that Jeder did not choose to be a ruffian and dreads the occupation. The idea that someone would celebrate a 14 hour job increases the sense of how maladapted Jeder is through no fault of his own, as many people at different points in history assuredly are. Today I think of the rather draconian views that society has towards the homeless and ex-convicts with no consideration of how hard it is to become, and remain, socio-economically stable.

In The Earth Will Shake Sigismundo often appears as a damned fool whereas in this novel he appears increasingly capable; his Masonic training has given him emotional discipline that readers should envy.

Chapter 4 is another initiation pageant that combines accurate depictions of “mainstream” Masonry with more esoteric flavor added in as well as RAW’s own confabulations. For the record, the only true degrees of Masonry, at least according to the US Grand Lodge, are the first three. The remaining thirty are found in Scotch Rite Masonry which is considered a concordant rite. The other popular concordant rite is the York Rite, where the Rosicrucian degree is found. Babcock’s initiation goes all in on the recurring symbol of the cornerstone that the builders rejected and shows, once again, that occultists are much better at displaying the richness of Biblical texts than any orthodox Christian.

The final part of Sir John’s initiation as a Mark Mason is a direct parallel to Sigismundo’s attitude as he dangles from a window in the Bastille: a Mason, or illuminated person, should not give in to despair. Fear is Failure and the Forerunner of Failure.

The De Selby footnotes have incorporated what must have been one of RAW’s favorite conspiracies, the P2 scandal that he wrote extensively about since the details were published in the early eighties.

From Eric Wagner: “Reading about sexism in Maria ’s world, I thought something by Francesca LeBrun might work this week.”

Two quotations from the chapter stuck with me: "Freemasonry, to him, was scientific mysticism, since it revealed by demonstration and did not demand blind faith."

It seems to me RAW expects the reader not just to read him, but to think about what he has written.

" 'A true initiation never ends,' old Pietro Malatesta back in Napoli once said; that meant (among other things) that you could think about it all your life and always find new meanings in each part of it."

This chapter, this book, RAW's work, can serve as an "initiation" for the reader, and you can think all your life about his work and what you are capable of doing, even if you you feel as if you are "the stone which the builders rejected." It seems to me in different ways this is a message RAW delivers over and over.

"Your situation is never as hopeless as it may seen at first glance ... always search to know what your true situation is."

Chapter Three (Part 2) has a plethora of allusions to Binah, of course.

p.92 Bluejay: "You will be happy to know that I learned enough about the electric fluid to realize that it is connected somehow (I know not how) with the healing power in my hands; ..."

Circuit 6 in Leary's model of consciousness originally got called the neuro-electric circuit. It changed, though I continue to favor this formulation. The words "connected somehow" connect somehow. Actually, a brilliant, albeit subtle, pun.

Sigismundo speaking in the last sentence of Chapter Three about escaping from the Bastille: "When I figure out how to make 120 feet of rope out of six blankets." Qabalistically, this recalls the ON forumla, O + N = 120. In that way, it makes a pun for escaping from the prison of robotic, mechanical consciousness - a well-known Fourth Way metaphor.

p. 96: "Whoever invented Speculative Masonry, whenever that was, the creator or creators were masters of psychology." RAW does a brilliant job of delineating the psychological metaphors behind Masonic rituals in this chapter, particularly the current one Babcock is going through.

p. 99 "The aim of the Craft was to create a real consciousness. a True Self. A square fit for the temple." One of several allusions to 4 in Chapter Four. Coincidentally, that also seems a primary aim of the Fourth Way which isn't a Masonic group. "This whole degree, Sir John thought, is all about fours and squares, in some sense.' p. 100 Babcock gets shown four different instances of Scripture about the corner stone the builders rejected becoming the head stone.

p. 104 ""Help may arrive invisibly and unexpectedly from unknown sources." I have experienced this more than once. One such, about a Moroccan recording trip, I documented in a blog post.

An interesting pair of chapters, to some extent comparing Women’s Mysteries (childbirth, being treated as a sexual object) with the initiatory ordeals of men. I have no reason to believe that Bob ever became a Freemason, but I wouldn’t feel surprised if he had. As Gregory pointed out, originally they offer only three degrees, Entered Apprentice, Fellowcraft, and the highest rank that anyone can earn, Master Mason, and the others seem like accretions of one kind or another, horizontal developments, rather than ‘higher’ degrees. I read through them a bit, when I discovered an old parchment, making my grandfather a Royal Arch Mason.

Back in MLA days, I compiled a piece about the Three Degrees and initiatory ordeals, based on a four element model I found in Colin Still’s book
“Shakespeare’s Mystery Play – a Study of The Tempest” (1921), and have not come across anywhere else, so remain uncertain as to whether he invented it, or that it comes from some other secret tradition).
In this, he describes the first degree as Purification (from earth to water – baptism, etc); the second degree as Overcoming Confusion (water to air – wilderness, mazes and labyrinths, etc) and the Third Degree as Death or Simulated Death (air to fire – passing through the ring of fire, seeing behind the veil, etc).

I don’t recall Bob writing about all the different initiations, so this one, to Mark Master, feels significant. He has compressed a rather long ritual into something less repetitious and more dramatic, but in the full ceremony the final stone does appear as a keystone – the secret of arches – not a square stone, as for walls – and written on it they have the letters HTWSSTKS. This stands for, “Hiram, Tyrian, Widow's Son, Sent to King Solomon.”

I like the fact that RAW adds Babcock’s sceptical doubts, the thought that the ritual probably doesn’t date back to Egypt, that the deviser of it understood psychology, etc – and yet that doesn’t protect him from the ‘shock’.

PS: I realised I had not explained that very well, and the link to the book review doesn’t really explain Colin Still’s model of initiations. When I re-read it, I made a chart, to simplify the explanation that he spreads out through his book. Not sure how to add images to Comments, so posted it here.

The Mark Master initiation appears to grant the candidate a unique signature/sigil or mark, used to indicate who worked a particular stone.
As it happens, and because I always assume complexity in RAW’s work, G Spencer-Brown calls the basic symbol in The Laws of Form the ‘mark’ or ‘cross’. It distinguishes something from nothing, inside from outside, etc.

Do the Masons run Weight Watchers? Asking for a friend.

After I posted my comment, I re-read Gregory's blog entry, and I saw he made a similar point:

"The final part of Sir John’s initiation as a Mark Mason is a direct parallel to Sigismundo’s attitude as he dangles from a window in the Bastille: a Mason, or illuminated person, should not give in to despair. Fear is Failure and the Forerunner of Failure."

It's a lesson I have to take to heart sometimes, not to let doubt about myself persuade me to give up on something.

Sir John and Sigismundo both require courage to get through their respective ordeals. RAW mentions this in Sigismundo's case. Recently I heard a Talking Head on TV quote Maya Angelou who said if she could have one virtue it would be Courage because that makes all the other virtues possible.