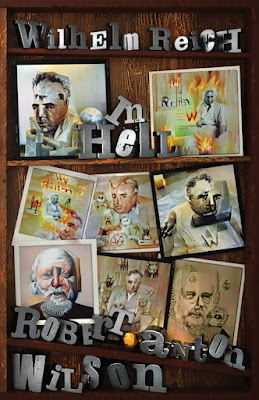 1. In the Hilaritas Press newsletter announcing the publication of Wilhelm Reich In Hell, Rasa wrote, "we think the timing could not be more appropriate. We live in strange and challenging days."

This could refer to any number of things, of course, but one of the main concerns of RAW's play is the amount of violence humans do to each other, and there has certainly been a raft of mass shootings lately in the U.S.

There was another one on June 1, the day the book came out, and it had a kind of grim synchronicity for me.

Five people were killed during the Tulsa shooting, including the gunman and two doctors. The shooting took place at the medical campus for St. Francis Hospital, only a short distance, an easy walk, from where both my parents and my sister live. Survivors and their families were reunited at Tulsa Memorial High School, my alma mater.

So certainly I have violence on my mind as we discuss the book.

2. I recently posted about "Infinite Gesture," R.U. Sirius' new collection of song lyrics without music. Steve Fly Agaric 23 has now set one of them, "Not A Bug But A Feature," to music. Listen to the track here.

3. Over at the Jechidah blog, Apuleius Charlton has been leading an online discussion of Sex, Drugs & Magick. He's been busy with his day job, but that's easing up, and he wants everyone to know blogging will resume next week.