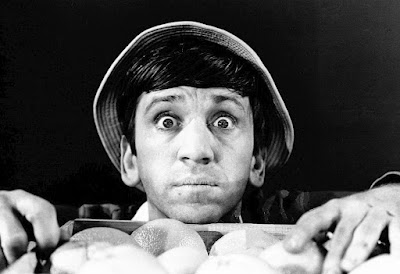 Bob Denver as Gilligan, one of the seven castaways in the TV comedy series, 'Gilligan's Island.'

I find it interesting that Bob mentions only dead white male (DWM) painters on page 220, and he only names dead white male composers by name (except for John Cage who died in 1992 between the two editions of Prometheus Rising). He does mention “Rock”, “Disco”, and “African chants”, collective nouns that include people of color. Both Dr. Wilson and I had very Eurocentric educations, although we have both tried to overcome them. Also, since I write this in a community college classroom, I find it interesting that Bob generally doesn’t use the Oxford comma, the comma in a list of three or more items before “and”. Bob and I grew up in eras which considered the Oxford comma optional. All the grammar and writing books I have taught from in the past twenty-three years consider the Oxford comma mandatory.

Bob asks the reader to “guess which specific imprints created” Kurt Saxon and John White’s reality-tunnels. I find it interesting that Kurt Saxon and Robert Anton Wilson share the same birth year, 1932. (Kurt Saxon has outlived Dr. Wilson.) I wondered if John White shared that birth year as well. I found multiple authors named John White, but the author of Pole Shift about whom Bob writes in this chapter seems to have the birthdate August 16, 1939. Interestingly when I heard Bob talk in 1987 he commented on the synchronicity that the upcoming Energetic Harmonic Convergence would take place on August 16, 1987, the tenth anniversary of Elvis Presley’s death. The initials E. H. C. made me think of all the H. C. E.’s in Finnegans Wake.

My friend and fellow Joycean Conrad Holt and I visited the energy vortices in Sedona, Arizona, on August 16, 1987. That night I went to see the film Back to the Beach which included appearances by two of the cast members of Gilligan’s Island. That night I realized the isomorphism between the seven dancing girls in Finnegans Wake and the seven castaways on Gilligan’s Island, and Conrad and I renamed our Finnegans Wake Decoding Society to Finnegans Isle. Of course 1939 marked the first publication of Finnegans Wake as well as the birth of John White.

The Clement Atlee quote on pg. 225, “The people of the earth are island shouting at each other over oceans of misunderstanding” seems even more relevant in 2022, alas.

Exercise 4 for this chapter says, “Write a criticism of this chapter from the viewpoint of Christian Fundamentalism.”

Brothers and sisters in Christ. I think we all know in our hearts the deep flaws in this chapter. Dr. Wilson mocks the inaccurate prophecies by Saxon and White but does not include any of his own failed prophecies from before the publication of this misguided book. He does make some ridiculous prophesies about the years after 1998, the year of the publication of the second edition of Prometheus Rising. We all know that God is only source of true prophecy. Brothers and sister, the Bible provides all can know of universe and all we need to know of universe.

Dr. Wilson liked to mock Holy Scripture. He preferred the obscene gibberish of Finnegans Wake. Have you tried to use that worthless cesspool of an impractical joke to run your life? I, alas, have. Here before you sits a reformed Joycean. Oh, I want to spare you the years of degradation that that evil book has led me down. Repent, repent and turn back to God. We sit in the hands of an angry God, whom our sins offend. Pull down thy vanity, as Ezra Pound said in one of his few moments of clarity.

Like Patty Hearst, we have gotten kidnapped by Dr. Wilson’s brilliant rhetoric and locked in the closet with his unfortunate heroes, the Satanist Aleister Crowley, the fascist Ezra Pound, the drug-crazed Timothy Leary, the sex-mad lunatic Wilhelm Reich, and the Anti-Christ himself, Friedrich Nietzsche. We read these dangerous authors with misgivings, but, not wanting to seem uncool, we came to understand them, even to agree with them. Before long we too disrespect our parents and storm the institutions which maintain law and order and civilization, with the machine guns of E-Prime, mocking satire, and other tools of Satan. Repent, repent, before we all stand in judgement before our Maker. We know in our hearts what we need to do get right with our Lord. Do not follow the instructions in the insidious chapter which calls for neurological relativism. This evil moral relativism has destroyed modern education and modern civilization. Repent, repent, before your time runs out. Burn your Robert Anton Wilson books and read the Bible. In Mark chapter 6 the Pharisees tried to convince Jesus the disciples should wash their hands before eating. Jesus condemned the Pharisees for their narrow mindedness, just as he would condemn Robert Anton Wilson. Repent, repent!

Bra-VO to Eric! Best, funniest, most articulate "write a critique of this chapter from the POV of a Xtian fundamentalist." Far better than the one I remember coming up with.

Thank you so much, Michael. I enjoyed writing it.

I recall RAW asking you, Eric, to say something about the 7 Gilligan's Island characters in the initial thread of the Tales of the Tribe course, something about how they correspond to the different neurocircuits, if memory serves and doesn't fabricate.

Believe it or not, I've recently considered the use of commas. I wondered if the sparse use of them by Rafi Zabor in his new book Street Legal contributed to the fast tempo of the story. Full of action it flows rapidly making for compelling reading.

From my viewpoint as a Christian Fundamentalist, it's nice to see Dr. Wilson recognize the transcendental beauty of Jesus (p. 217). The rest of the chapter seems a muddle of models lost in a sea of philosophical nonsense. He purports to discuss the nature of how we perceive reality without mentioning The Holy Bible once. Neurological relativism is a fantasy, probably drug induced. Even the sentence acknowledging Our Lord is contaminated by conjoining him with Buddha in transcendental beauty despite calling this heathen a drop-out in the previous paragraph. Buddhists are atheists, Jesus is the son of God, what could the two possibly have in common? This reeks of pantheism, i.e. devil worship. The Great God Pan is obviously the Devil, just take a look at any illustration of him.

Neurological relativism falls flat because it's based on Science and not Scripture. There is a glimpse of truth when Wilson writes: "... each will have to take responsibility for the reality we accept" (p. 217). Unfortunately, he fails to say that the only reality worth having is one that accepts Jesus Christ into our lives and allows the literal teachings of the Bible to guide us. Everything else leads to a life of darkness as we clearly see in his examples of Kurt Saxon and John White who both show not one shred of Christian values and are despicable degenerates. I pray that the lost sheep searching for answers in this pagan trap of a book find their way back into the fold, confess to their sins, and get redemption before it's too late.

Thanks to Eric and Oz for your Christian Fundamentalist rants. You might have just secured your front row seats, Business Class, in the Heaven Express.

A few last thoughts on this chapter:

“Travel 100 miles in any direction, and the consensus begins to crumble. Travel 1000 miles and very little consensus is left…”
I am not sure if this statement still holds up. Our world might very well be more fragmented and divided about what is “really real” now than when PR was originally published, but I doubt that space plays as important a role in it that back then.

The Bertrand Russell and Whitehead’s Theory of Types conundrum appears to be the starting point of Gödel, Escher, Bach, mentioned in the previous chapter. So if anyone is interested in exploring the matter further, that’s a good place to start.

A few weeks ago, I wrote that this chapter’s opening quote from FW might as well apply to FW itself. Now, RAW writes “if we confront the world without ideas we see only a muddle, the formless void that existed before “God” (intellect) started to create a universe (a system)”, and “once we become the “image of God” by making our own universe, we have a model of the muddle.”
Firstly, I see the God/image of God metaphor here as an isomorphism of the as-above-so-below type of correspondence. But I also feel like, once again, it could apply to the experience of reading FW, where at first one might not be able to see anything else than a big muddle, before starting to creatively make sense of parts of it, everyone in their own peculiar fashion depending on their native language, cultural education, familiarity with specific myths and legends etc.
As RAW says, “the logic of the dream-world of Finnegans Wake is not so far from real life, either.”
So in a way, studying FW could be seen as isomorphic to studying one’s own nervous system. Our perception and understanding of Joyce's book might tell us a lot about both ourselves and our understanding of the Reality we perceive (see the Crowley paragraph on dhyana).

Thank you for the interesting comments.