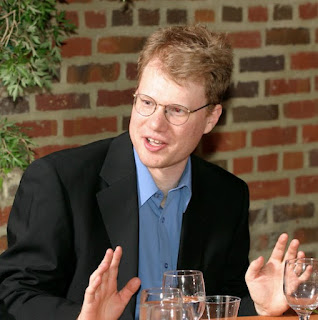 Jesse Walker, a bit younger than today but still young, in pundit mode. Photo posted on Facebook when he turned 51 last year. He's chatting at this wedding dinner when he got married.

Today is the 23rd, so it should see the release of the latest Hilaritas Press podcast, available here.   I am particularly looking forward to today's episode, because it's expected to feature an interview with Jesse Walker, the author, pundit and Reason books editor (also a part time movie reviewer, expert on the history of radio and a collector of the writings of Robert Anton Wilson.) His Twitter account features a daily "morning image."

The folks who will be tuning in today to hear what's on the the podcast will include Mr. Walker! When I asked for a sneak preview of host Mike Gathers' interview topics, Jesse explained, "It's been so long since we recorded it that I've forgotten most of the conversation, so I'm looking forward to finding out myself. (They originally were going to do a Chapel Perilous mega-episode with me, Antero, and others, but eventually they realized that they needed to split it up.)

"I do remember that we discussed the idea of an entire society entering Chapel Perilous. I think we may have discussed social media. And I may have brought up some of the ideas in my cults article from last year."

I'll update this blog post later today, but I do want to mention that the Hilaritas podcast site is not the only place to access the new episode and the eight previous ones (Antero Alli, James Joyce, R. Buckminster Fuller, John Lilly, Kerry Thornley, Timothy Leary, Aldous Huxley, Wilhelm Reich, Alfred Korzybski). It's officially supported at Podbean, Apple, Google, Spotify and TuneIn, but I've noticed that it's finally on Podkicker, my favorite Android app, so it might be on your favorite app, too.

A bit more on the podcast here.

Loved the part where Jesse describes feeling like he’s always playing the role of mediator with dogmatic people who find it impossible to see things from other points of view. Very Wilsonian.

Excellent podcast! Around 11:30 Jesse says he needs a new metaphor something like where everything is adjacent to everything else. That description fits with Deleuze & Guattari's metaphor of the rhizome (non-hierarchical omnidirectional connections). Another highlight - humor as a strategy for navigating Chapel Perilous. I have to research "web 3," never heard of it before.

This transmission sparked an interest to read The United States of Paranoia. For me, paranoia becomes a balancing act, some degree of paranoia seems healthy and necessary.