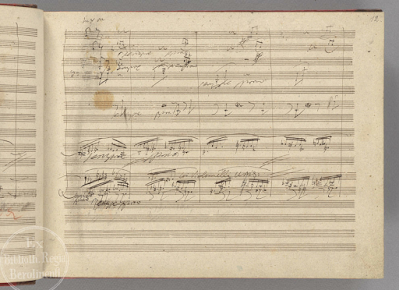 A page from Beethoven's manuscript for the Ninth Symphony. .

On page 238 Bob writes that “’Good Americans’ believed Dr. Leary was a half-crazed dope-fiend. I recall in the 1980’s I heard multiple people who didn’t like Dr. Leary refer to him as “Mr. O’Leary”, both taking away his doctorate and emphasizing his Irishness.

I find Bob’s discussion of “the Mind War symphony” on page 241 very interesting. Of course, I think of Beethoven’s Ninth Symphony. Bob writes about the fourth movement of that symphony in the upcoming chapter on the eighth circuit. In this chapter Bob writes:

The first movement was the primitive neuroscience of ancient and medieval tyrants who acquired a great deal of pragmatic know-how about the effects of isolation, terror and intimidation; and of shamans and occultists who learned how neuro-chemicals can alter perceived reality-tunnels. The second movement began with modern psychology, with Freud, Pavlov, Jung, Skinner, etc., climaxing with the LSD revolution and the discovery by millions that reality-tunnels could be radically mutated – temporarily and sometimes permanently – by neurochemistry.

The third movement is the growingly obvious warfare between those who would program all of us, and those of us who wish to become our own Metaprogrammers.

If one sees Beethoven’s Ninth as somewhat isomorphic to this model, Bob’s words on the fourth movement seem apropos:

Mystics stammer, gibber and rave incoherently in trying to discuss this. Beethoven says it for all of them, without words, in the fourth movement of the Ninth Symphony. The words of Schiller’s “Ode to Joy,” which Beethoven set to this virtually superhuman music, are a linear third-circuit map conveying only a skeleton key to the multi-level meanings of the 8-circuit “language” of the melodic construction itself, which spans all consciousness from primitive bio-survival to meta-physiological cosmic fusion. (pg. 261)

The phrase “skeleton key” makes me think of Joseph Campbell and Henry Morton Robinson’s A Skeleton Key to Finnegans Wake. (David Shenk and Steve Silberman wrote Skeleton Key: A Dictionary for Deadheads, inspired in part I suspect by the Campbell and Robinson title. One finds a number of Deadheads among Bob’s readers, myself included.)

The phrase “spans all consciousness from primitive bio-survival to meta-physiological cosmic fusion” makes me think of Stanley Kubrick’s 2001: A Space Odyssey. Kubrick’s A Clockwork Orange use of Beethoven’s Ninth seems to fit perfectly with Bob’s notion of a Mind War symphony with its brain washing theme, especially Kubrick’s use of the second movement. James Joyce greatly influenced Anthony Burgess, who wrote the novel A Clockwork Orange, and Bob Wilson loved Burgess’s novel about Shakespeare Nothing Like the Sun.

(Hopefully my co-workers and neighbors won’t have me committed to a mental hospital before I finish writing this book.)

I found it interesting to live a whole week with the program, “Everybody likes me and tries to help me achieve all of my goals.” I did encounter a number of people whom I think do not like me that week. This makes me think of the radical changes that took place in Elwood P. Dowd before the start of the play Harvey. He previously strode to act “oh so smart,” but then he began to act “oh so kind.” I fear that believing everyone likes me might make me become gullible and get taken advantage of (this sort of happens to Elwood), but that sort of reprogramming might work out well. The bunnies in the backyard have not started talking to me yet, or at least I don’t think so. I have begun metaprogramming that “Everything works out more perfectly than I plan it.” We will see.

Great post! I read an excellent book on Joyce by Anthony Burgess, don't recall the title at the moment. He may have written more than one. I love the film version of Harvey, have watched it a few times.

The burden of nescience appears on full display with some political candidates having to agree with Trump's claims of election fraud to get his endorsement. Another recent example: when Putin met with his top officials to get their support for his invasion of Ukraine.

RAW quotes Leary: "Communication is love." That takes a little deeper grokking for me. I agree about the positive, sometimes healing benefits of communicating love and that the possibility exist for doing so to a much greater extent than most people realize, but I don't know if all communication = love. I once posted in an MLA course RAW gave something about certain kinds of magick involving communication. RAW replied that all magick = communication.

RAW writes about the "growing obvious warfare between those who would program all of us, and those of us who wish to become our own Metaprogrammers." It seems the Supreme Court majority imposed their own moral code on the U.S. by overturning Roe v Wade. Also, if such a war exists, it behooves self-Metaprogrammers to keep quiet about their activities, a form of secrecy. Therefore Leary's statement: "Secrecy, withholding the signal, hoarding, hiding, covering up the light is motivated by shame and fear," would have exceptions. Leary might have enjoyed a few more years outside of prison had he applied more secrecy to his activities. Secrecy motivated by maintaining personal freedom.

RAW uses a phrase Gurdjieff emphasized: "intellectual wiseacring," on page 232. On page 235 he uses the phrase "fear and loathing" a couple of times, a catch phrase of gonzo journalist Hunter S. Thompson.

Regarding Beethoven, Kubrick, and Anthony Burgess, I feel like in a way the Wendy Carlos treatment of the original material could almost be seen in the light of human evolution or even space migration, with the futuristic sounding rendition of centuries old composition. As if the Beethoven piece was being taken to outer space. At least that is what I am imagining.

I like the points you are making, Oz Fritz. If we follow this logic, then 'all magick = love', which surely I wouldnt venture to believe wholeheartedly...
Then again, some traditions assess that all is Love, and what isnt only is an illusion. Lots of isness there...

I also thought of Gurdjieff when reading about "wiseacreing". These days, I have been listening to an audiobook version of Beelzebub s Tales on the Michael Garland yt channel, and I cannot refrain a smile every time this word pops up. I find the vocal delivery to be very good, and to my mind it really helps to reminds one how funny this book can be.

In this chapter we find mention of Kafka. The Trial is next on my list, after which I plan on rewatching the Orson Welles adaptation.

Spookah, regarding the notion "all is love" check out again the Joyce quote that opens Chapter 2 of Sex, Drugs & Magick. Beelzebub does have a great of humor probably made more apparent having it read aloud. I love that book.